November 13, 2013 at 3:39 PM ET by Dan Utech
Twitter Facebook Email
Summary:
In October, domestic oil production exceeded crude oil imports in for the first time since 1995, while petroleum net imports were the lowest since February 1991.

Picture yourself back in 1995 for a moment. Besides questionable music and fashion choices, we were at the start of some troubling trends in energy. The fuel economy of our cars and trucks had flatlined for five years, and they would stay that way for another 15. We were producing less and less of our own fuel at home, and biofuels were barely on the map, let alone in our gas tanks. We began to import more and more oil to make up for surging demand at home.

Fast forward to today, and our energy landscape couldn’t be more different. Our cars and trucks have never been more efficient, and homegrown biofuels account for about 10 percent of our transportation fuel. We are producing more of our oil here at home, and we are getting it from resources that we thought were unreachable just a decade ago.

Today, the Department of Energy announced that we’ve hit another milestone on our path to a more secure energy future. In October, domestic oil production exceeded crude oil imports for the first time since 1995, while petroleum net imports were the lowest since February 1991. For energy, the last two decades have been a story of resurgence and regaining control of our energy security, and this achievement underscores the changes in how we produce and use energy. 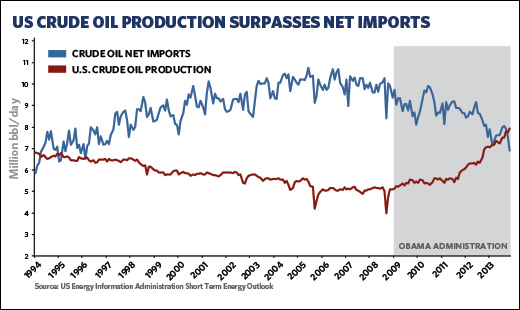 But how did we get from 1995 to today? The actions that President Obama and his Administration have taken to reduce our reliance on foreign oil play a significant role in this story. One of the very first actions the President took to implement his energy and climate strategy was to direct the Environmental Protection Agency and the Department of Transportation to work with the auto industry to develop new fuel economy standards for cars and trucks – because improving fuel efficiency represents one of the best opportunities we have to reduce our dependence on oil.  As a result, we’re already seeing more efficient cars and trucks rolling off of assembly lines and into garages across the county. More than 70% of the oil we use is for transportation, and these investments in efficient cars and trucks have helped drive down oil consumption and save drivers money at the pump.

At the same time, new technology, driven in part by research at the Department of Energy, has helped to unlock new domestic energy supplies in places like North Dakota and Texas. This month, oil production hit a 24-year high, bucking a trend that saw more nearly two decades of decline and slipping production. And, as a result of research and private investments, we also produce ten times more biofuels than we did in 1995, helping to back even more oil out of the transportation sector.

So where do we go from here? For most households, energy for transportation is still their second-highest expense, after housing. That’s why the Administration is continuing to make investments in efficient vehicles and alternative fuel technologies like electric vehicles and biofuels. We know that oil is only one part of an all of the above energy solution, and the President has laid out a Climate Action Plan that will spark innovation across a wide variety of energy technologies, resulting in cleaner forms of American- made energy. We’ve made a lot of progress since the 1990’s and if we continue our work to boost fuel economy, curb oil consumption, and cut carbon pollution, we’ll be just as amazed at what we’ve achieved another couple decades down the road.