November 26, 2013 at 10:09 AM ET by Erin Lindsay
Twitter Facebook Email
Summary:
On Wednesday, November 27th, President Obama will pardon the 2013 National Thanksgiving Turkey and once again the American people will decide which bird takes the title. 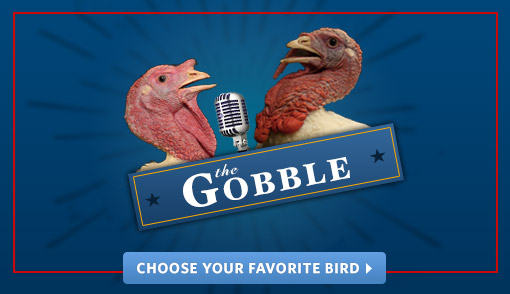 On Wednesday, November 27th, President Obama will pardon the 2013 National Thanksgiving Turkey and once again the American people will decide which bird takes the title.

Turkeys have carved out a pivotal role in the holiday season at the White House since the 19th century, but last year, for the first time, the pardon winner was chosen through a competitive online vote.

Which of these two turkeys will be plucked from obscurity and awarded the title? Hatched on the same day on the farm of John Burkel near Badger, Minnesota, Caramel and Popcorn may have been raised together, but each has flown their own path. Caramel is a steady and deliberate bird that enjoys soybean meal and rocking out to Lady Gaga. When Popcorn is feeling peckish, he can't stop snacking on his namesake, corn, and has been known to strut around to Beyonce's "Halo".

People all across the country are flocking to cast a vote, so be sure to learn more about Caramel and Popcorn, listen to them croon their distinct gobble sounds and then tell us who you think should be named the National Thanksgiving Turkey!

We'll count up the hashtags to make sure there's no fowl play. The deadline for voting is 8pm ET on Tuesday, November 26th.

Don't forget to tune in to President Obama's remarks and the ceremony on Wednesday, November 27th on http://wh.gov/live at 1:15 pm ET to find out which turkey has been selected as the 2013 National Thanksgiving Turkey. And for more on how this Presidential tradition came to be check out the definitive history of the Presidential Turkey Pardon.