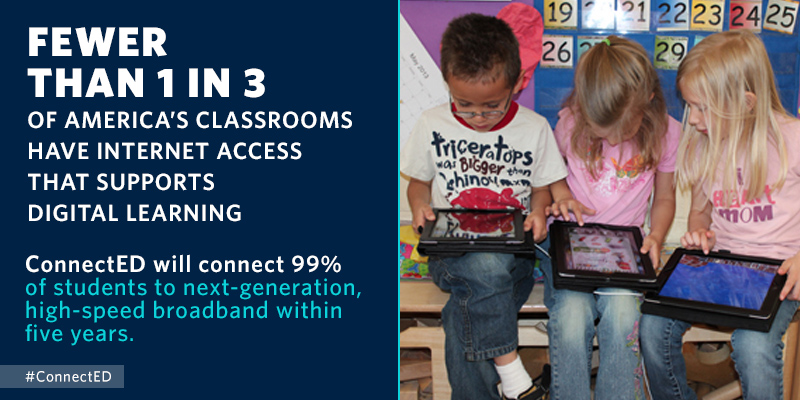 Today, President Obama visited Buck Lodge Middle School in Adelphi, Maryland to announce major progress on the ConnectED initiative, designed to enrich K-12 education for every student in America. ConnectED empowers teachers with the best technology and the training to make the most of it, and empowers students through individualized learning and rich, digital content.

Preparing America’s students with the skills they need to get good jobs and compete with countries around the world relies increasingly on interactive, personalized learning experiences driven by new technology. Yet fewer than 30% of America’s schools have the broadband they need to connect to today’s technology. Under ConnectED, however, 99% of American students will have access to next-generation broadband by 2017. That connectivity will help transform the classroom experience for all students, regardless of income.

As the President announced today, the Federal Communications Commission (FCC) will invest $2 billion over the next two years to dramatically expand high-speed Internet connectivity for America's schools and libraries -- connecting more than 20 million students to next-generation broadband and wireless. He also announced that private-sector companies have committed more than $750 million to deliver cutting-edge technologies to classrooms, including: