myRA: Helping Millions of Americans Save for Retirement

February 11, 2014 at 5:20 PM ET by David Hudson
Twitter Facebook Email
Summary:
President Obama announced in his State of the Union address that he is directing the Department of the Treasury to create "myRA" -- a safe, simple, and affordable "starter" retirement savings account that will ultimately help millions of Americans begin to prepare for retirement.

Let’s do more to help Americans save for retirement. Today, most workers don’t have a pension. A Social Security check often isn’t enough on its own. And while the stock market has doubled over the last five years, that doesn’t help folks who don’t have 401(k)s. That’s why ... I will direct the Treasury to create a new way for working Americans to start their own retirement savings: myRA.
— President Barack Obama, State of the Union, January 28, 2014

The most secure retirement requires a three-legged stool that includes Social Security, savings, and pensions. Although Social Security will remain a guaranteed benefit all Americans can rely on, about half of American workers, and 75 percent of part-time workers, lack access to employer-sponsored retirement plans like 401(k)s.

These plans are usually the most effective means of saving for retirement. That’s why President Obama announced in his State of the Union address that he is directing the Department of the Treasury to create "myRA" -- a safe, simple, and affordable "starter" retirement savings account that will ultimately help millions of Americans begin to prepare for retirement.

myRA is a new type of savings account for Americans who don’t have access to an employer-sponsored retirement savings plan. Workers who sign up will be able to have a portion of their paycheck directly deposited into their myRA automatically every payday.

What are the benefits of myRA? 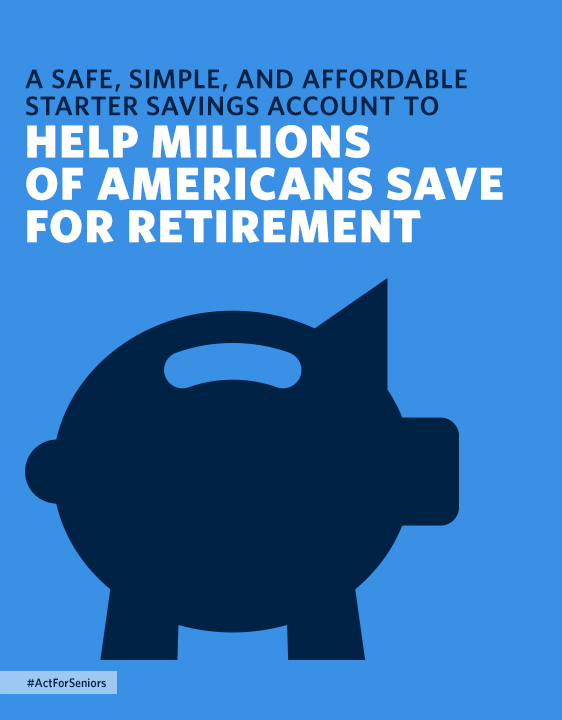 It’s simple: Contributions as low as $5 can be made through easy-to-use payroll deductions. Savers can keep the same myRA when changing jobs, and can also roll the balance over to a private-sector retirement account at any time. Savers will also be able to withdraw their contributions tax free at any time.

It’s safe: Contributions to the account are invested in a Treasury security, which means it will be backed by the full faith and credit of the United States. myRA’s feature government-backed principal protection, so the account balance will never decrease in value, and will earn the same interest rate that is available to federal employees for their retirement savings.

It’s affordable: There are no fees, and workers can enroll in the program with a minimum contribution of $25, and add to their savings through regular direct deposits as low as $5 each payday.

By the end of 2014, workers whose employers choose to participate in an initial myRA pilot program will be able to sign up online. Employers will neither administer the accounts nor contribute to them, but will send the direct deposit to each participating employee’s myRA.

Other proposals to help Americans save for retirement:

In addition to myRA, the President will work with Congress on two other proposals to help Americans save for their retirement.

Since half of all American workers lack access to employer-sponsored retirement plans, the onus is often on individuals to set up an IRA. Whereas 90% of workers automatically enrolled in a 401(k) plan through their employer make contributions, fewer than 10% of workers eligible to contribute to an IRA voluntarily do so.

The President’s budget will propose to establish automatic enrollment in IRAs (or “Auto-IRAs”) for employees without access to an employer-sponsored savings plan. Employers that do not provide a workplace savings plan would have to connect their employees with a payroll-deduction IRA. This proposal could provide access to one-quarter of U.S. workers.

Current retirement tax subsidies disproportionately benefit higher-income households, many of whom would have saved with or without incentives. About two-thirds of tax benefits for retirement saving go to the top 20% of earners, with one-third going to the top 5%.

The President has proposed to limit the benefits of tax breaks, including retirement tax preferences, for high-income households to a maximum of 28% of the value of the deduction or exemption. The President has also proposed to limit contributions to tax-preferred savings accounts once balances are about $3.2 million – large enough to fund a reasonable pension in retirement.

Read our myRA fact sheet for more details about this program.