February 14, 2014 at 10:11 AM ET by Valerie Jarrett
Twitter Facebook Email
Summary:
President Barack Obama meets with Edie Windsor during a drop by in the Oval Office.

On June 26, 2013, the Supreme Court ruled 5-4 that Section 3 of the Defense of Marriage Act (DOMA) was unconstitutional. The case was United States v. Windsor, and it was filed by a woman named Edie Windsor who had to pay nearly $400,000 in federal estate taxes after her wife, Thea Spyer, passed away in 2007. While the State of New York recognized their marriage, the federal government did not – because of DOMA.

Following the Court’s historic ruling in Windsor, the Administration has moved to implement the decision so that loving, committed, legally married same-sex couples can enjoy the same federal rights, benefits and obligations as other married couples. Just this Monday, the Justice Department issued a new policy memorandum to “formally instruct all Justice Department employees to give lawful same-sex marriages full and equal recognition, to the greatest extent possible under the law.”

When the Court handed down its decision last June, President Obama called Edie from Air Force One to congratulate her on her victory. And earlier this week, the President invited Edie to the France State Dinner and the Oval Office to thank her in person. 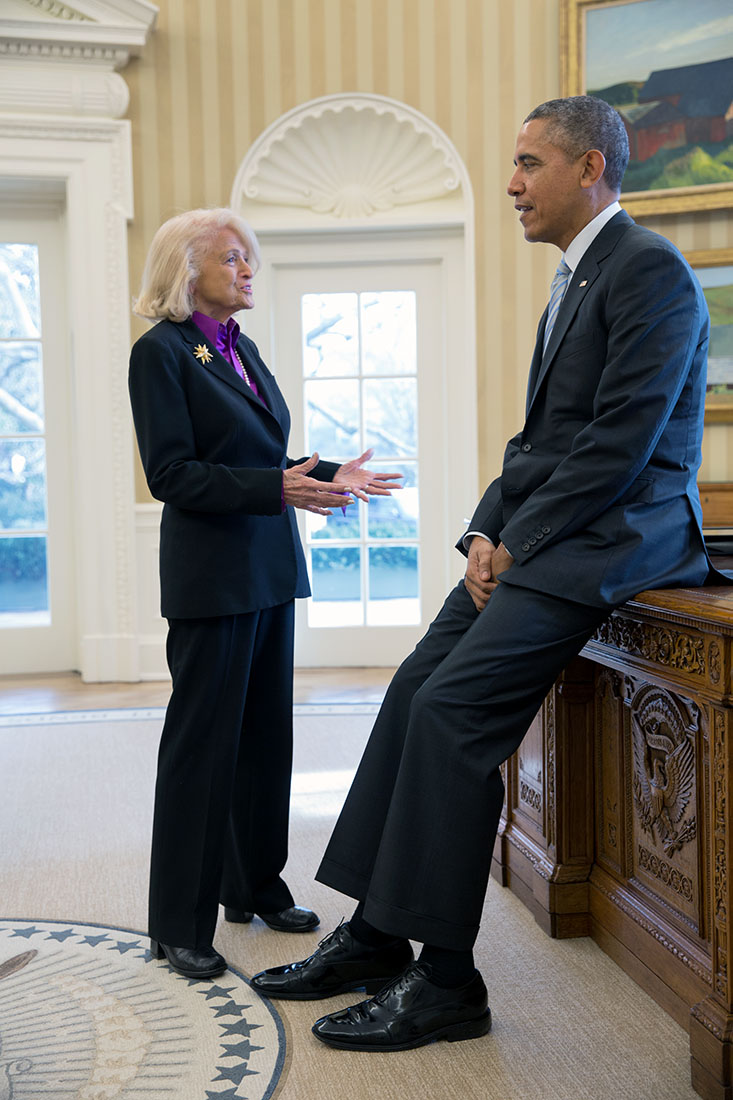 President Barack Obama meets with Edie Windsor during a drop by in the Oval Office, Feb. 12, 2014. (Official White House Photo by Pete Souza)

The thanks expressed by the President that day have been echoed by millions of Americans, including thousands of legally married couples who can now live their lives with greater justice and dignity – thanks to heroes like Edie Windsor who have been willing to stand up and fight for equality under the law.

Valerie Jarrett is Senior Advisor to the President and Chair of the White House Council on Women and Girls.