Add Your Name: It's Time to Raise the Wage

March 5, 2014 at 5:02 PM ET by Secretary Thomas E. Perez, Secretary Tom Perez
Twitter Facebook Email
Summary:
No one working full time in this country should have to raise a family in poverty. We can raise the federal minimum wage to $10.10, and we should.

This afternoon, Secretary Tom Perez sent the message below to the White House email list, asking people to add their name in support of raising the federal minimum wage.

Didn't get the email? Make sure you sign up for updates from the President and other White House officials.

Several weeks ago, I met Semethia and Anna.

Semethia's a 36-year-old single mom. Her son hopes to go to college one day. Her daughter wants to take gymnastics lessons. But with a service job that pays just $8.25 an hour, Semethia relies on food stamps and help from friends and family just to keep food on the table -- much less build the future she'd like for her kids.

Anna works as a tip server at two local D.C. restaurants. She doesn't yet have to support a family, but she still struggles to make ends meet when she's relying on tips to get by -- and she sees the tough decisions her colleagues make every day. One of her coworkers recently missed her son's birthday party in order to cover a shift -- that's how badly she needed the money to support her family.

You see, when we talk about the kind of folks whose lives will be made better by raising the minimum wage, we're not talking about a couple teenagers earning extra spending money to supplement their allowance. We're talking about providers and breadwinners. Working Americans with bills to pay and mouths to feed.

And right now, millions of them are trying to do that on just $7.25 an hour.

We can change that. We can raise the federal minimum wage to $10.10 an hour, we can do it right now, and we should. If you agree that it's high time we do -- that America's workers deserve a raise -- then add your name right here.

The President said this in his State of the Union, and we can't lose track of it: Here in America, no one working full-time should have to raise a family in poverty.

Think about that for a second: Right now, around the country, there are parents who, despite working full-time jobs, are living below the poverty line. We're better than that. 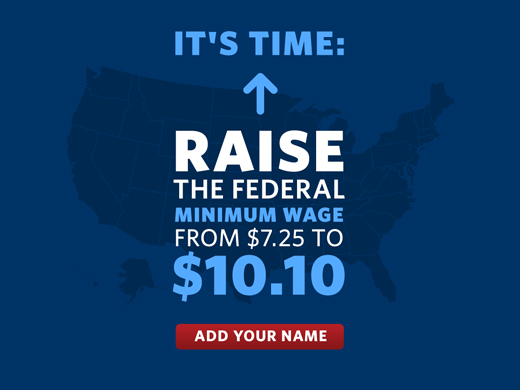