7.1 Million Americans Have Enrolled in Private Health Coverage Under the Affordable Care Act

April 1, 2014 at 2:48 PM ET by Lindsay Holst
Twitter Facebook Email
Summary:
As of today, we know that more than 7 million Americans have signed up for private health coverage.

Today, the White House announced that more than 7 million Americans signed up for affordable health care through the Health Insurance Marketplace during the Affordable Care Act's open enrollment period, which ended on March 31.

The number, initially announced during Press Secretary Jay Carney's briefing, means that millions of Americans across the country now have access to quality, affordable care.

President Obama updated that number to 7.1 million during remarks delivered in the Rose Garden:

The truth is, even more folks want to sign up.  So anybody who was stuck in line because of the huge surge in demand over the past few days can still go back and finish your enrollment -- 7.1 million, that’s on top of the more than 3 million young adults who have gained insurance under this law by staying on their family’s plan.  That’s on top of the millions more who have gained access through Medicaid expansion and the Children’s Health Insurance Program.  Making affordable coverage available to all Americans, including those with preexisting conditions, is now an important goal of this law. 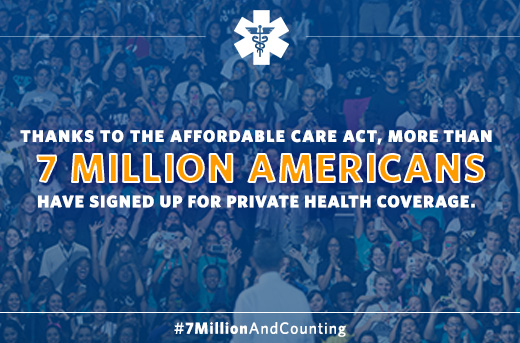 Though HealthCare.gov got off to a rocky start in October, the open enrollment period ended with soaring interest -- including a record-breaking 4.8 million visits to HealthCare.gov, and around 2 million calls to CMS call centers. Throughout this weekend, Americans across the country were literally lined up around the block at local enrollment centers.

It's important to remember that 7 million represents only part of the total number of people who have received coverage under the Affordable Care Act: millions more have been covered by state Medicaid expansions, and around 3 million Americans under 26 are now covered under their parents' plans.

Take a look at the online momentum around the final day to get covered in 2014: