April 11, 2014 at 6:21 PM ET by Jonathan Friedman
Twitter Facebook Email
Summary:
This week, the President honored soldiers who lost their lives last week at Fort Hood, commemorated the 50th anniversary of the Civil Rights Act, and picked up his pen to take action toward ensuring equal pay. Check out what else you may have missed in this week's wrap up.

This week, the President honored soldiers who lost their lives last week at Fort Hood, commemorated the 50th anniversary of the Civil Rights Act, and picked up his pen to take action toward ensuring equal pay. Check out what else you may have missed in this week's wrap up.

On Wednesday, President Obama spoke at a memorial service for the soldiers who lost their lives during last week's shooting at Fort Hood Military Base.

In his remarks, the President explained that we must honor their lives "not in word or talk, but in deed and in truth." Watch his full remarks here.

"It's Nice To Have a Day, But It's Even Better To Have Equal Pay"

The President celebrated Equal Pay Day on Tuesday by doing something only he can: picking up his pen and signing two executive actions to help ensure equal pay for all.

The executive actions President Obama signed will protect federally contracted employees from retaliation if they broach the topic of unequal compensation and will require federal contractors to submit more data on employee compensation, making sure employers take proactive efforts to ensure fair pay for all their employees. Way back in January during the State of the Union address, the President said this would be a year of action, and these executive orders on equal pay are just another reminder that he is keeping that promise.

This year marks the 50th anniversary of President Lyndon Baines Johnson signing the Civil Rights Act. President Obama traveled to the LBJ Presidential Library in Austin, Texas to reflect on the historic piece of legislation and the legacy of the 36th president.

The VP, a Navy SEAL, and Man's Best Friend

Vice President Biden met with Trevor, a Navy SEAL, and Chopper, the military dog who saved Trevor's life, this week. In this episode of Being Biden —the audio series where the Vice President gives you a window into his daily life and shares some of his most memorable experiences — he shares more about that meeting.

Can't get enough of the Vice President? Check out every episode of Being Biden.

We've Got Tools For You!

There are a lot of government agencies and web sites out there; sometimes it's hard to keep track. But scattered on those sites are some helpful resources that can make your life easier. 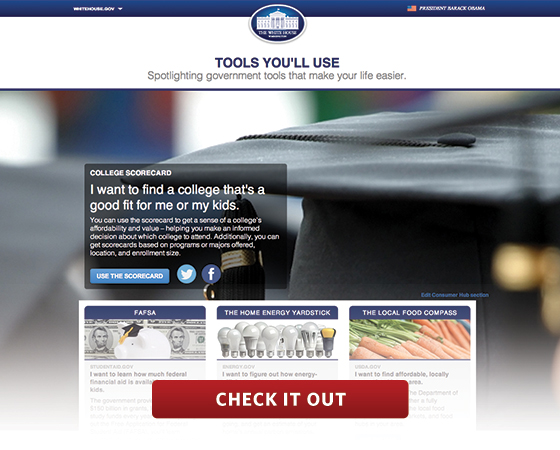 We've searched through the .gov websites out there to find some of the tools that you might just find useful. Head to WhiteHouse.gov/Tools and you can find the farmers' markets near you, determine if a hybrid car will save you money, and much more.

As always, to see even more of this week's events, watch the latest episode of West Wing Week below: