May 26, 2014 at 11:04 AM ET by Lindsay Holst
Twitter Facebook Email
Summary:
President Obama commemorates Memorial Day by traveling to Arlington National Cemetery, laying a wreath at the Tomb of the Unknown Soldier, and delivering remarks honoring our fallen troops.

Today, President Obama traveled to Arlington National Cemetery to lay a wreath at the Tomb of the Unknown Soldier and deliver remarks at a memorial service honoring our fallen servicemembers and their families.

The President, who returned from Afghanistan this morning, thanked troops and veterans for their service to our nation, and paid tribute to the fallen:

Today, in small towns across America, in cemeteries throughout our country and around the world, and here on these solemn hillsides, the families of our fallen share stories of the lives they led. Our hearts ache in their absence. But our hearts are also full -- full in knowing that their legacy shines bright in the people that they loved the most. Through almost unimaginable loss, these families of the fallen have tapped a courage and resolve that many of us will never know. And we draw comfort and strength from their example.

We draw strength from the promise of their children. Today, Michelle and Jill are with 200 brave boys and girls whose parents gave everything they had in service to their country.

The First Lady and Dr. Biden were seated in the audience with children who are participating in the Tragedy Assistance Program for Survivors' "Good Grief" camp -- a program that provides a safe and supportive atmosphere to help young survivors learn coping skills and identify support systems.

In his remarks, the President shared the stories of some of these children, and honored the bravery of their parents:

Mariella, the oldest of the three, has become a mentor to other children who’ve lost their parents. Mariliz, the middle girl, was used to her dad carrying her everywhere when she was little; now 7, she shepherds her little sister, Marianna. And Marianna, who was just a baby when her dad was deployed, is starting to understand what it means that her daddy served his country. Mariella, Mariliz, and Marianna are here today.  And we say to you -- and to all these courageous children -- your parents’ bravery lives on in you. You will never walk alone. Your country will be there to help you grow up into the young men and women your parents always knew you would be. And that’s our pledge to you.

We draw strength as well from the love of the spouses of the fallen. Sergeant First Class Joseph Gantt was a young man but already a veteran of World War II when he met Clara Edwards on a train headed to California.  He spent two years courting Clara before she finally agreed to marry him. Then, when Joseph deployed to Korea, he told his young wife to remarry if he didn’t come back. She told him no.  He had a hard enough time getting her to say yes in the first place, she said. He had waited two years for her; she’d wait as long as it took for him to come home.

When Joseph went missing in action, Clara waited -- she waited 63 years. Meanwhile, our country continued to work to bring home the missing from all our wars.  And then, last December -- last December -- his remains finally identified, Joseph returned home to be laid to rest. Clara never remarried during those 63 years. And now 96 years old, she was there to welcome him home. And we are honored to have Clara Gantt here with us today.

The President closed his remarks by saying that today is a day to "rededicate ourselves to our sacred obligations to all who wear America's uniform, and to the families who stand by them, always."

The fallen patriots we memorialize today gave their last full measure of devotion. Not so we might mourn them, though we do. Not so that our nation might honor their sacrifice, although it does. They gave their lives so that we might live ours -- so that a daughter might grow up to pursue her dreams; so that a wife might be able to live a long life, free and secure; so that a mother might raise her family in a land of peace and freedom. Everything that we hold precious in this country was made possible by Americans who gave their all. And because of them, our nation is stronger, safer, and will always remain a shining beacon of freedom for the rest of the world. 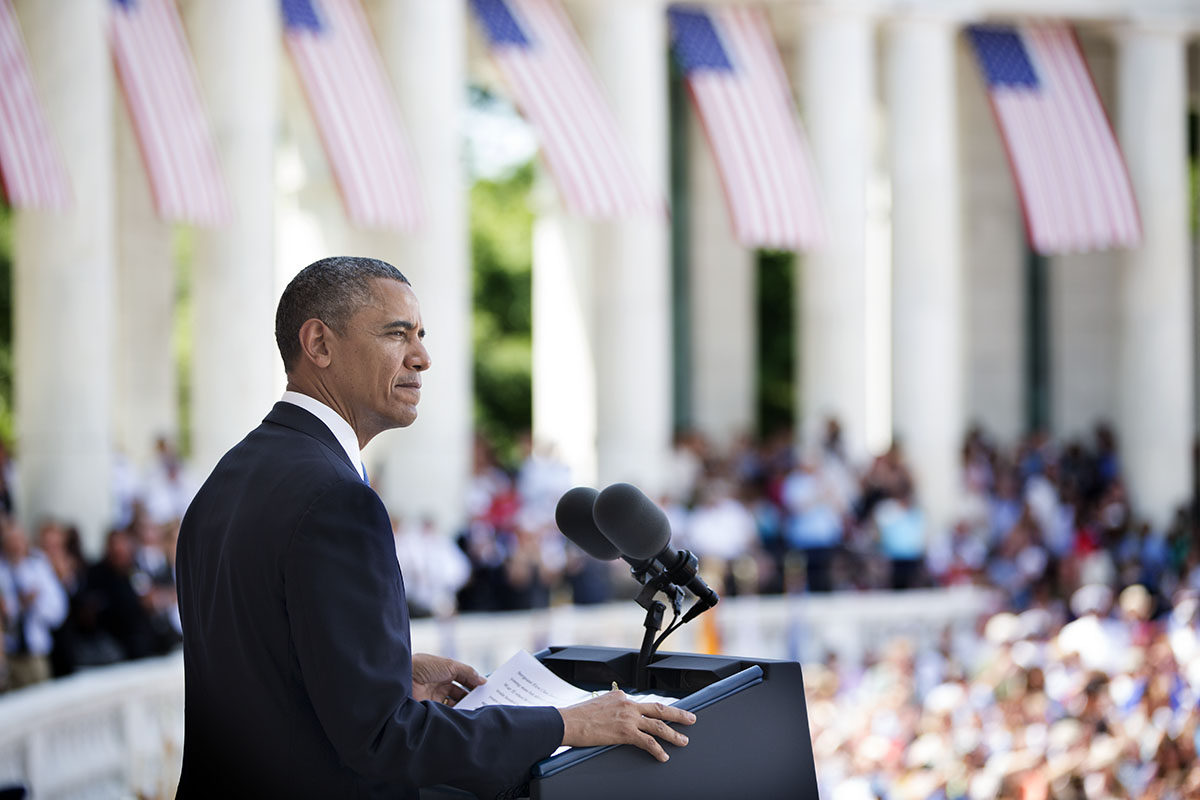