June 5, 2014 at 5:12 PM ET by David Hudson
Twitter Facebook Email
Summary:
On the third day of President Obama's four-day trip to Europe, he attended the G-7 Summit in Brussels, held a joint press conference with Prime Minister David Cameron of the United Kingdom, and traveled to Paris to join President François Hollande for a dinner. 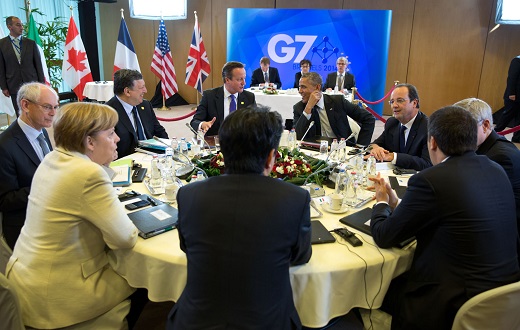 President Barack Obama talks with other G7 Summit leaders before the start of their plenary session on the global economy, in Brussels, Belgium. June 5, 2014. (Official White House Photo by Pete Souza)

On the third day of President Obama's four-day European tour, he attended the 2014 G-7 Summit in Brussels, Belgium. The summit brought together like-minded, advanced industrial economies to discuss a number of key issues, including energy security, climate change, the global economy, development, and the situation in Ukraine.

In the afternoon, President Obama participated in a bilateral meeting with Prime Minister David Cameron of the United Kingdom, followed by a joint press conference. In the President's remarks, he elaborated on the situation in Ukraine and energy security -- the two issues that dominated G-7 discussions. 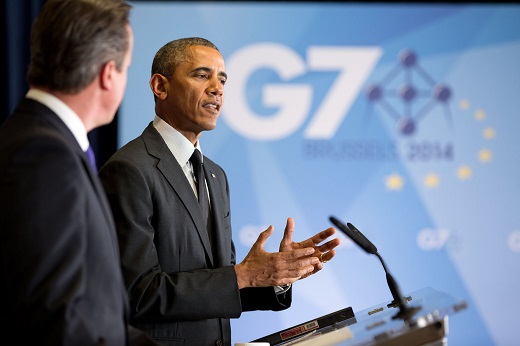 The President stressed that every nation in the G-7 has taken steps to impose costs on Russia, and that the United States will impose "additional costs" if Russia continues its behavior in Ukraine.

On Ukraine, I shared the results of my meeting yesterday with President-elect Poroshenko. Like so many Ukrainians, he wants to forge closer ties with Europe and the United States, but also recognizes that Ukraine will benefit from a constructive relationship with Russia. So I believe his inauguration provides an opportunity, particularly since he has demonstrated a commitment to reach out to the east, and pursue reforms. Russia needs to seize that opportunity. Russia needs to recognize that President-elect Poroshenko is the legitimately elected leader of Ukraine and engage the government in Kyiv.

The situation in Ukraine also provoked more substantive discussions on energy security. The President said that the G-7 members agreed to "continue to lead by example in the fight against climate change, which poses a danger to our environment, our economies, and our national security." He stressed that the United States will continue to do its part, highlighting the major steps taken this week by the Environmental Protection Agency to limit carbon pollution from our existing power plants.

This is one of the most ambitious steps that any nation has taken to combat climate change. It would reduce carbon emissions from our electricity sector by 30 percent. It will help us meet the commitments that we made when I first came into office, at Copenhagen. And it will improve our public health. It’s also going to be good for our economy -- by helping to create more clean energy jobs and ultimately lower electricity bills for Americans. So it’s the right thing to do.

While taking questions from reporters, the President also addressed the decision to rescue Sgt. Bowe Bergdahl, reiterating one basic principle of our nation: "We do not leave anybody wearing the American uniform behind."

The President continued: "We had a prisoner of war whose health had deteriorated and we were deeply concerned about, and we saw an opportunity and we seized it. And I make no apologies for that."

Watch the joint press conference below:

In the early evening, President Obama hopped on Air Force One for a short flight over to Paris, where he joined President François Hollande for a dinner near the Arc de Triomphe. And tomorrow, President Obama will travel to Normandy, where he will attend a ceremony to commemorate the 70th anniversary of D-Day.