"You Can Ignore the Facts; You Can’t Deny the Facts" -- President Obama on Climate Change

Last night, at the Ronald Reagan Building and International Trade Center in Washington, D.C., President Obama addressed the League of Conservation Voters at their annual Capital Dinner. In his remarks, he commended them on their work to protect the planet, and emphasized that the work is "even more urgent and more important" now than when he last spoke to the League in 2006, due to the rapidly growing threat of climate change.

Yesterday's address fell on the one-year anniversary of the President's speech at Georgetown University announcing his Climate Action Plan -- a series of executive actions to reduce carbon pollution, prepare the U.S. for the impacts of climate change, and lead international efforts to address global climate change.

"I started my speech [at Georgetown] the same way I start all my speeches on climate change -- with the facts," he said. "Not a lot of spin, just the facts."

Highlighting some of those facts, the President explained how burning fossil fuels releases carbon dioxide, which traps heat. Carbon dioxide levels are higher today than they've been in 800,000 years. And the 20 warmest years on record for the Earth have all occurred since 1990. Not coincidentally, communities across America are experiencing longer wildfire seasons, worse droughts, heavier rainfall, and more frequent flooding.

"Those are the facts," he said. "You can ignore the facts; you can't deny the facts."

So the question is not whether we need to act.  The overwhelming judgment of science, accumulated and measured and reviewed and sliced and diced over decades, has put that to rest.  The question is whether we have the will to act before it’s too late.  Because if we fail to protect the world we leave our children, then we fail in the most fundamental purpose of us being here in the first place.

The President also took a few moments to light into climate deniers in Congress -- those who like to say that climate change is only a hoax or a fad or a liberal plot.

"I'm not a doctor either," he said. "But if a bunch of doctors tell me that tobacco can cause lung cancer, then I'll say, okay. Right? I mean, it's not that hard."

Fortunately, as the President also noted, the American people are smarter about the situation, with 7 in 10 Americans saying that global warming is a serious problem. "And of all the issues in a recent poll asking Americans where they think we can make a difference," he said, "protecting the environment came out on top. We actually believe we can do this. We can make a difference." 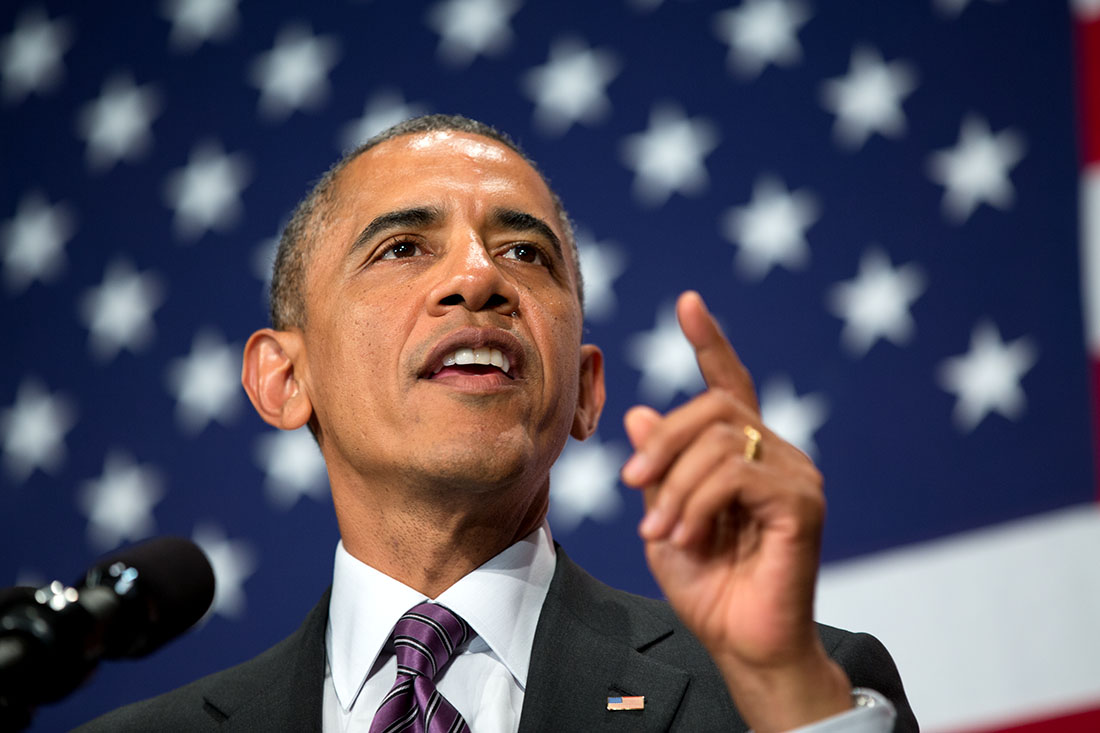 President Obama also pointed out that his administration is doing more for conservation, noting that the administration has established 10 new national parks, 10 new National Wildlife Refuges, and 11 new national monuments since he took office in 2009. "As Americans," he said, "we have an obligation to be good stewards of the gifts that have been given, and make sure that they're around for our kids and our grandkids."

The President concluded his remarks with a story from one of his conversations with San Antonio Spurs coach Gregg Popovich, to "illustrate the point" and encourage those in attendance to keep up their important work:

For more than a decade, Coach Pop has hung a sign in the Spurs locker room for all his players to see.  And on that sign is a quote from a 19th-century reformer, which is not what you’d expect to see in an NBA locker room but that’s the kind of guy Coach Popovich is, and the quote goes something like this:  “When nothing seems to help, I go look at a stonecutter hammering away at his rock perhaps a hundred times without as much as a crack showing in it.  Yet at the hundred and first blow, it will split in two, and I know it was not that blow that did it, but all that had gone before.”

So that’s what we’re doing -- together, we are pounding the rock.  And together, we are making progress.  And sometimes it feels like, man, I’m getting tired.  And we’re not moving fast enough.  But then one day, the rock splits open -- not because one person comes up or one President comes up and strikes a mighty blow, but because of all the work that has gone on before.  Our work.  So until the day comes that the rock is split, we’ve all got to take turns pounding.  We’ve got to keep fighting.  We’ve got to keep mobilizing.  We’ve got to keep making sure that your voices are heard in Congress, in state capitals, in city halls.  Because that’s the only way we’re going to build the kind of future that we want -- cleaner, more prosperous, more good jobs; a future where we can look our kids in the eye and tell them we did our part, we served you well, we were good stewards, we’re passing this on.