The President Heads to D.C.'s Key Bridge to Talk Infrastructure and the Economy

July 2, 2014 at 1:04 PM ET by David Hudson
Twitter Facebook Email
Summary:
President Obama delivers a speech on infrastructure and the economy, with Washington, D.C.'s Key Bridge serving as the backdrop.

On a hot and muggy day, the President quickly got down to business, talking about the merits of the Highway Trust Fund, established by Congress in the 1950s, which helps states build and repair roads, bridges, and other infrastructure projects across the country.

But funding for the Highway Trust Fund is in danger of running out by the end of the summer, jeopardizing nearly 700,000 American jobs. Putting that in more tangible terms, the President noted that it "would be like Congress threatening to lay off the entire population of Denver, or Seattle, or Boston. That's a lot of people. It would be a bad idea."

Some projects are already running out of money, and our failure to adequately fund infrastructure projects is also hurting us on a global scale. "We spend significantly less as a portion of our economy than China does, than Germany does, than just about every other advanced country," President Obama said. "They know something that I guess we don’t, which is that’s the path to growth, that’s the path to competitiveness."

Earlier this year, the President put forth a plan to replenish the Highway Trust Fund. It's a plan that wouldn't add to the deficit -- and we would pay for it in part by closing tax loopholes for corporations that are shipping their jobs overseas.

The President reminded the audience that this issue is not out of the ordinary:

"It’s not crazy, it’s not socialism. It’s not the imperial presidency -- no laws are broken. We’re just building roads and bridges like we’ve been doing for the last, I don’t know, 50, 100 years."

But House Republicans have refused to act -- and this obstructionism has real consequences for working-class Americans.

"And they criticize me for this," the President said. "Boehner sued me for this."

And I told him, I’d rather do things with you, pass some laws, make sure the Highway Trust Fund is funded so we don’t lay off hundreds of thousands of workers.  It’s not that hard.  Middle-class families can’t wait for Republicans in Congress to do stuff.  So sue me.  As long as they’re doing nothing, I’m not going to apologize for trying to do something. 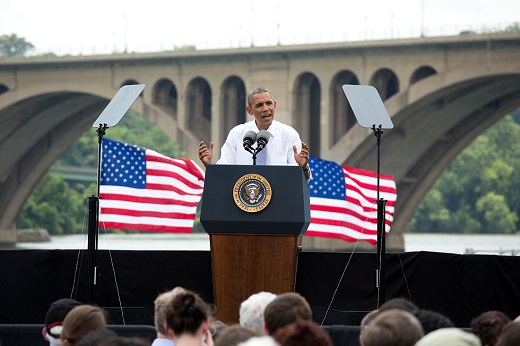 The President went on to note the flaws in Republicans' theory of how the economy works, saying that "they believe that all we should be doing is giving more tax breaks to those at the top, eliminating regulations that stop big banks or polluters from doing what they want, cut the safety net for people trying to work their way into the middle class, and then somehow the economy is going to get stronger and jobs and prosperity trickle down to everybody."

"It’s just not accurate," the President countered. "It does not work. We know from our history our economy doesn’t grow from the top down; it grows from the middle out."

"We could do so much more if we just rallied around an economic patriotism," he continued, "a sense that our job is to get things done as one nation and as one people."

Economic patriotism says that instead of stacking the deck in the favor of folks just at the top, let’s harness the talents and ingenuity of every American and give every child access to quality education, and make sure that if your job was stamped obsolete or shipped overseas, you’re going to get retrained for an even better job.

Economic patriotism says that instead of making it tougher for middle-class families to get ahead, let’s reward hard work for every American. Let’s make sure women earn pay that’s equal to their efforts. Let’s make sure families can make ends meet if their child gets sick and they need to take a day off. Let’s make sure no American who works full-time ever has to live in poverty.

This is the sort of economic patriotism that we should all be able to get behind -- where everybody is worth something, and everybody has a stake in the future economic growth of this country. So in order to move forward, we need to all be in this together.

And so I just want everybody here to understand that as frustrating as it may be sometimes, as stuck as Congress may be sometimes, if the American people put pressure on this town to actually get something done and everybody is looking at some commonsense agenda items that we should be able to do because Democrats and Republicans were able to do them in the past, we can grow our economy, we can lift people’s incomes, we can make sure that people who are fighting hard can get into the middle class and stay there. But it’s going to take you. It’s going to take you. This is not going to happen on its own. And I’m confident if that’s what we do, if all of you are fighting alongside me every single day instead of just giving up on this place, then we’re going to make America better than ever. That’s a promise. 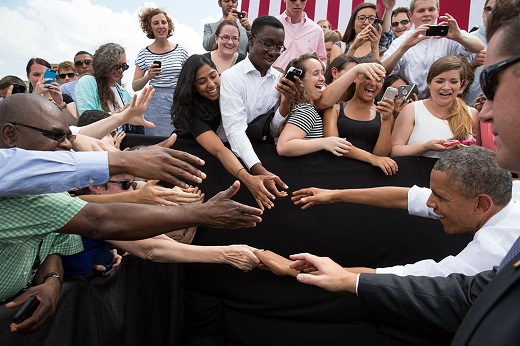