July 6, 2014 at 5:44 PM ET by Lindsay Holst
Twitter Facebook Email
Summary:
You might be seeing a lot of news about job growth this week. That's because at the beginning of every month, the U.S. Bureau of Labor Statistics releases a report on our country's general employment situation for the previous month -- and this month's showed good news.

You might be seeing a lot of news about the economy creating more jobs.

That's because at the beginning of every month, the U.S. Bureau of Labor Statistics releases a report on our country's general employment situation for the previous month -- and this month's showed some good news.

What's it all mean, and why should you care?

There's still much more to do to keep moving forward, but we've put together a few key points about how our economy is doing generally. Take a look -- and if you learn something new, pass it on.

Our country hasn't seen this kind of job creation since the 1990s — and we've been adding more than 200,000 jobs a month for five months straight.

The 1.4 million jobs added in the first half of this year are the most in any first half since 1999. What's more, this is the first time since September 1999-January 2000 that we've seen total job growth above 200,000 for five straight months.

Auto sales in June are also the highest they've been since mid-2006 — before the financial crisis.

Let's not forget that the American auto industry is continuing to bounce back -- adding 18,000 jobs this past month for a total of 463,000 jobs added since Chrysler and GM came out of bankruptcy in June 2009.

In addition to doubling renewable electricity generation from sources like wind and solar, last October something big happened: For the first time in nearly two decades, we started importing less foreign oil than we were producing at home. 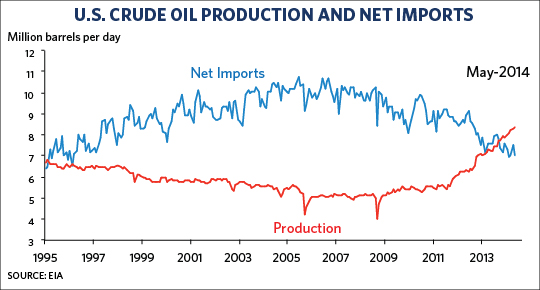 It's progress -- but we've still got work to do.

Want a more in-depth look at what the jobs numbers mean, complete with more charts, numbers, and economist-speak? Take a look at this post from Jason Furman, Chairman of the Council of Economic Advisers.

And if you're looking for more great charts and infographics related to the economy, visit our Shareables hub.