A Day in the Life: Austin

July 11, 2014 at 1:02 PM ET by David Hudson
Twitter Facebook Email
Summary:
President Obama capped off his three-day tour with a visit to Austin, Texas, where he sat down for coffee with a letter writer, delivered a speech on the economy, and grabbed some lunch at a local BBQ joint.

President Obama capped off a three-day road trip with a visit to Austin, Texas, where he sat down for coffee with a letter writer, delivered a speech on the economy, and grabbed lunch at a local BBQ joint.

Relive the President's day in Austin right here. (And, if you want to write the President yourself, you can always do that here.)

In the morning, the President grabbed coffee with Kinsey Button, who wrote him a few months ago.

Kinsey Button is a student at the University of Texas at Austin. She wrote the President talking about her family's struggles, after both of her parents lost their jobs.

Kinsey said she's always been passionate about politics and engaging with this country's most important issues -- but after the government shutdown last year, she wrote in her letter that she felt like Washington wasn't listening.

She's inspired by POTUS efforts to fight for middle class families/wants to join the fight RT @tess46: @PressSec what did she write about?”

So the President wanted to meet with Kinsey to let her know that he is listening -- and that he's listening to every American who is just trying to do the right thing to build a decent life for themselves and their families.

After coffee, the President gave a speech in Austin.

The President delivered remarks on the economy at the historic Paramount Theatre.

President Obama's doing his job to fight for middle-class families. It's time for the GOP in Congress to do theirs. http://t.co/SxdFjIJ9JO

POTUS in Austin: I'm here to fight for middle class families who are working hard for shot @ the American Dream. pic.twitter.com/MW2GLWPwrS

Then, the President stopped at a local BBQ joint. 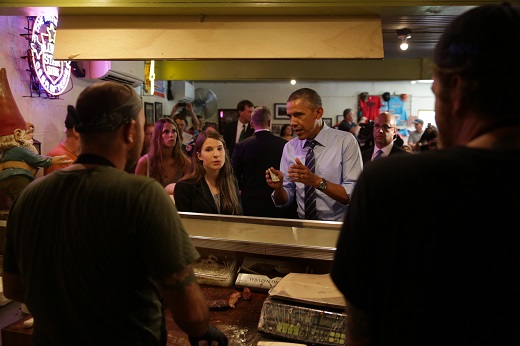 And then it was wheels up on Air Force One, back to Washington.

Smells amazing. It will be enjoyed aboard AF1 RT @ZekeJMiller: Pool: Obama is en route to Air Force one with nearly $300 in barbecue in tow

Check back in the next few weeks as the President continues traveling around the country to meet with working Americans and highlight the actions he's taken to benefit them.