July 28, 2014 at 1:35 PM ET by Jeanne Lambrew, Tim Gronniger
Twitter Facebook Email
Summary:
The latest annual report from the Medicare program’s Boards of Trustees brings good news about the program’s financial future: Its Trust Fund will last four more years, to 2030, and projected Part B premiums for 2015 will not increase for the second year in a row.

Today’s annual report from the Medicare program’s Boards of Trustees brings good news about the program’s financial future: Its Trust Fund will last four more years, to 2030, and projected Part B premiums for 2015 will not increase for the second year in a row.

As we celebrate Medicare’s 49th birthday this week, we will recommit to ensuring that the program continues providing health and economic security for the nation’s elderly and people with disabilities through the 21st century and beyond. Today’s news shows that we are on the right track, and we are optimistic that the promising results we’ve seen in recent years can continue into the future.

In 2009, the Trustees projected the Hospital Insurance Trust Fund would not be able to pay its bills in 2017 – just three years from now. Today’s new date is 2030, 13 years later than that projection – an improvement that is thanks in part to reforms in the Affordable Care Act (Chart 1). The law implemented changes to promote value-based payments, reduce waste and fraud, and strengthen the program’s benefits. These changes, for example, have reduced hospital spending on preventable readmissions, helping to lower hospital costs, which constitute a significant portion of trust fund spending. 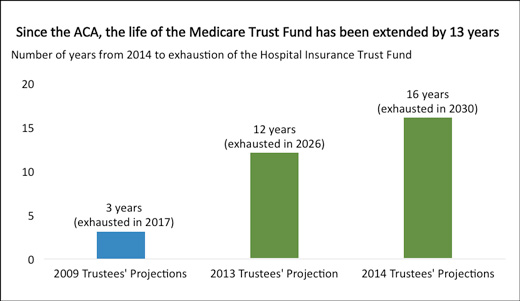 Today’s report highlights that Medicare per capita cost growth has slowed markedly in recent years, helping restrain overall growth in Medicare spending even as millions of “baby boomers” enter the program. According to an analysis released by the Department of Health and Human Services (HHS) today, the per capita growth rate for Medicare spending over the 2009-2012 period was just one-third of its rate over the 2000-2008 period, falling from 6.3 percent per person to 2.0 percent per person. In 2013, that rate fell to nearly zero, and, so far in fiscal year 2014, growth in per person Medicare spending is at or below zero (Chart 2).

This dramatic decline in the trajectory of Medicare spending has generated big savings relative to what would have been expected under the 2000-2008 rate of growth: approximately $116 billion over the four years from 2009-2012 (Chart 3). 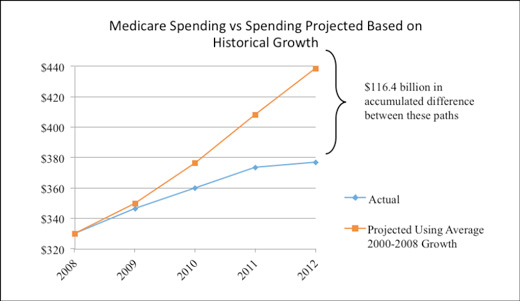 Another important measure of Trust Fund solvency is the actuarial imbalance, which measures the gap between the Trust Fund’s income and expenditures over the next 75 years. This year, that gap is just 0.87% of taxable payroll, down by more than 75% since 2009, before passage of the Affordable Care Act.

Lower Medicare spending means lower cost sharing and lower premiums for Medicare beneficiaries. For the second year in a row, premiums in Part B are projected to stay the same in 2015 as in 2013 and 2014. This means seniors are expected to keep more of their annual Social Security cost of living adjustment. In fact, the last six years have seen some of the slowest premium growth in the program’s history. Moreover, the Affordable Care Act has saved millions of beneficiaries over $10 billion in prescription drug costs by improving prescription drug benefits and closing the “donut hole.”

While today’s report focuses on Medicare, it reflects broader trends in the health care system toward much slower growth in costs, a trend that has continued into 2014. Over the 50 months since enactment of the Affordable Care Act, health care prices have risen at a slower rate than over any comparable period in 50 years. At the same time, growth in per enrollee spending in private health insurance remains slow by a variety of measures, and a leading measure of employer health benefit costs is growing at rates that are among the slowest since data collection began in 1981.

Although the positive developments in recent years reflect a variety of factors, one important contributor is the Administration’s ambitious program of delivery system reforms to improve the quality of patient care as well as to reduce costs:

Today’s reports highlight what we have accomplished, but work remains to be done. To that end, the President will continue to implement delivery system reforms that reduce costs and improve quality, and has included in his budget proposals that will further strengthen Medicare. Through those efforts, we will set Medicare on a stable footing not just for the next year, but for the next 50 years.