President Obama: "Russia Is Once Again Isolating Itself from the International Community"

July 29, 2014 at 6:58 PM ET by David Hudson
Twitter Facebook Email
Summary:
President Obama speaks on the South Lawn about the situation in Ukraine, in the wake of the shoot-down of Malaysia Airlines Flight 17.

This afternoon, President Obama spoke on the South Lawn about the situation in Ukraine, in the wake of the shoot-down of Malaysia Airlines Flight 17 nearly two weeks ago.

"In the Netherlands, Malaysia, Australia, and countries around the world," he said, "families are still in shock over the sudden and tragic loss of nearly 300 loved ones senselessly killed when their civilian airliner was shot down over territory controlled by Russian-backed separatists in Ukraine."

Noting that those families and their nations are America's friends and allies, the President made clear that the U.S. "continues to do everything in our power to help bring home their loved ones, support the international investigation, and make sure justice is done."

President Obama then explained that Russia, along with its proxies in Ukraine, are neither cooperating with the investigation, nor pursuing a diplomatic solution to the conflict in Ukraine:

These Russian-backed separatists have continued to interfere in the crash investigation and to tamper with the evidence.  They have continued to shoot down Ukrainian aircraft in the region.  And because of their actions, scores of Ukrainian civilians continue to die needlessly every day.

Meanwhile, Russia continues to support the separatists and encourage them, and train them, and arm them.  Satellite images, along with information we've declassified in recent days, show that forces inside Russia have launched artillery strikes into Ukraine -- another major violation of Ukraine’s sovereignty.  And we have information that Russia continues to build up its own forces near the Ukrainian border and that more Russian military equipment, including artillery, armored vehicles, and air defense equipment, has been transferred across the border to these separatists.

The President reiterated that since the start of the Ukraine crisis, the U.S. "has worked to build a strong international coalition to support Ukraine, its sovereignty, its territorial integrity, its right to determine its own destiny, and to increase the pressure on Russia for actions that have undermined Ukraine’s sovereignty, territorial integrity, and ability to make its own decisions."

"The core of that coalition," he said, "is the United States and our European allies."

The President also announced in today's statement that the U.S. and the European Union will be imposing more sanctions in key sectors of the Russian economy:

Building on the measures we announced two weeks ago, the United States is imposing new sanctions in key sectors of the Russian economy:  energy, arms, and finance.  We’re blocking the exports of specific goods and technologies to the Russian energy sector.  We’re expanding our sanctions to more Russian banks and defense companies.  And we’re formally suspending credit that encourages exports to Russia and financing for economic development projects in Russia.

At the same time, the European Union is joining us in imposing major sanctions on Russia -- its most significant and wide-ranging sanctions to date.  In the financial sector, the EU is cutting off certain financing to state-owned banks in Russia. In the energy sector, the EU will stop exporting specific goods and technologies to Russia, which will make it more difficult for Russia to develop its oil resources over the long term.  In the defense sector, the EU is prohibiting new arms imports and exports and is halting the export of sensitive technology to Russia’s military users.

And because we’re closely coordinating our actions with Europe, the sanctions we’re announcing today will have an even bigger bite. 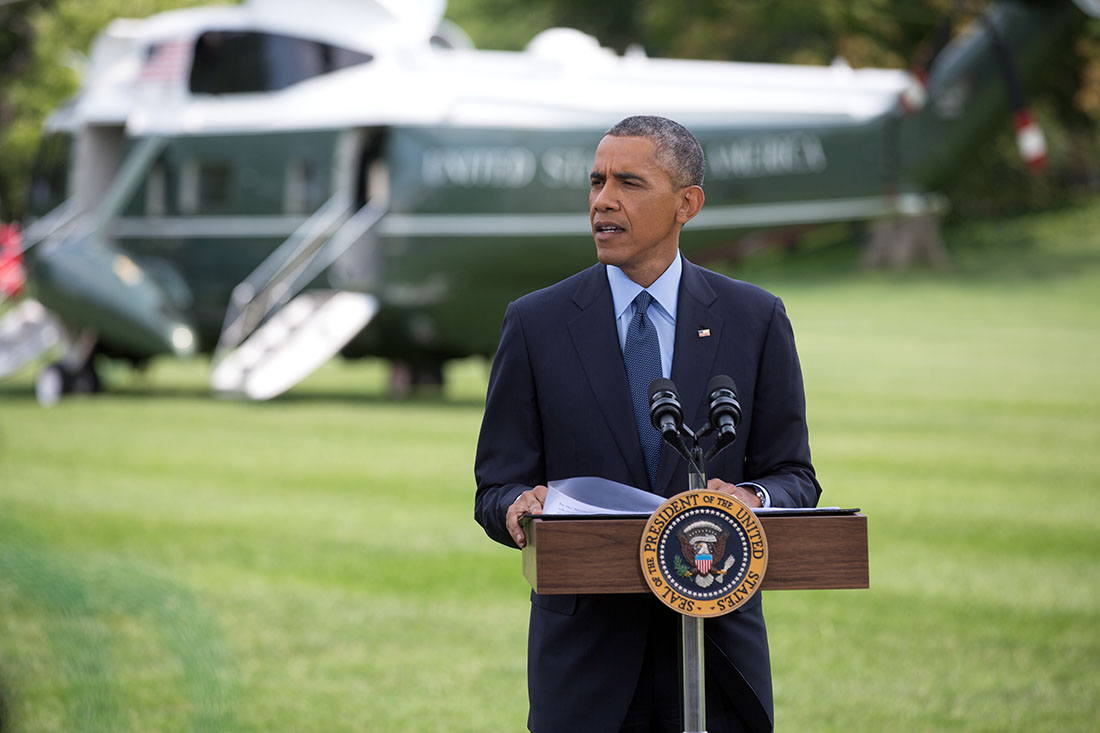 President Barack Obama delivers a statement on the situation in Ukraine, on the South Lawn of the White House, July 29, 2014. (Official White House Photo by Lawrence Jackson)