Advance Estimate of GDP for the Second Quarter of 2014

July 30, 2014 at 9:35 AM ET by Jason Furman
Twitter Facebook Email
Summary:
Economic growth in the second quarter was strong, consistent with the recent further improvement in the labor market and other indicators.

Economic growth in the second quarter was strong, consistent with the recent further improvement in the labor market and other indicators. The economy could do even better if Congress does its part to help — starting with taking the steps needed to ensure that work on our roads and bridges is not brought to a halt this fall. But to make further progress, the President is pressing ahead on his own authority, taking action to facilitate investments in American manufacturing, energy, and infrastructure.

1. Real gross domestic product (GDP) increased 4.0 percent at an annual rate in the second quarter of 2014, according to the advance estimate from the Bureau of Economic Analysis. The second-quarter increase in GDP follows a first-quarter decline that was slightly less steep than previously reported. In the second quarter, growth in consumer spending and business investment picked up from the previous quarter, and residential investment increased following two straight quarters of decline. Additionally, state and local government spending grew at the fastest quarterly rate in five years. However, net exports subtracted from overall GDP growth, as imports grew faster than exports. Over the last four quarters, real GDP has risen 2.4 percent.

2. The revisions to historical data released today altered the pattern of growth over the last several years but had little net effect on the overall magnitude of the recovery. Real GDP growth in 2011 and 2012 was revised down to an average annual rate of 1.6 percent, but growth in 2013 was revised up to 3.1 percent. The strong growth in 2013 reflects especially rapid growth in the second half of the year. From the end of the recession in 2009:Q2 to the end of 2013, the economy grew at an average annual pace of 2.3 percent, little changed from what was previously reported. 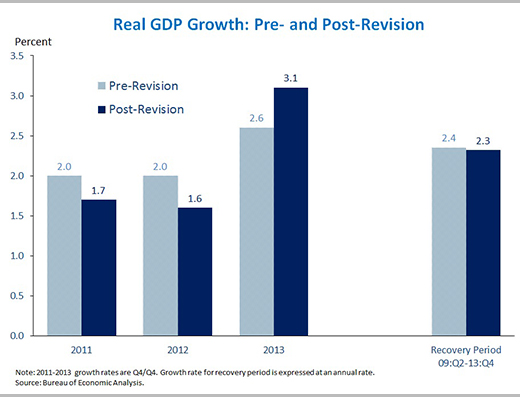 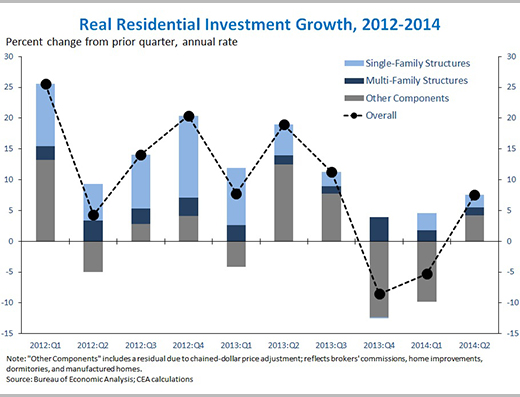 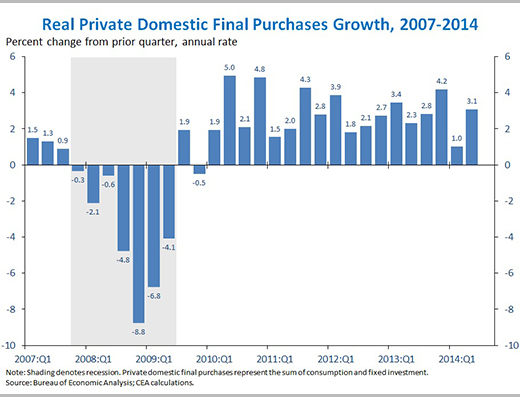