Attorney General Holder: "The Eyes of the Nation and the World Are Watching Ferguson Right Now" 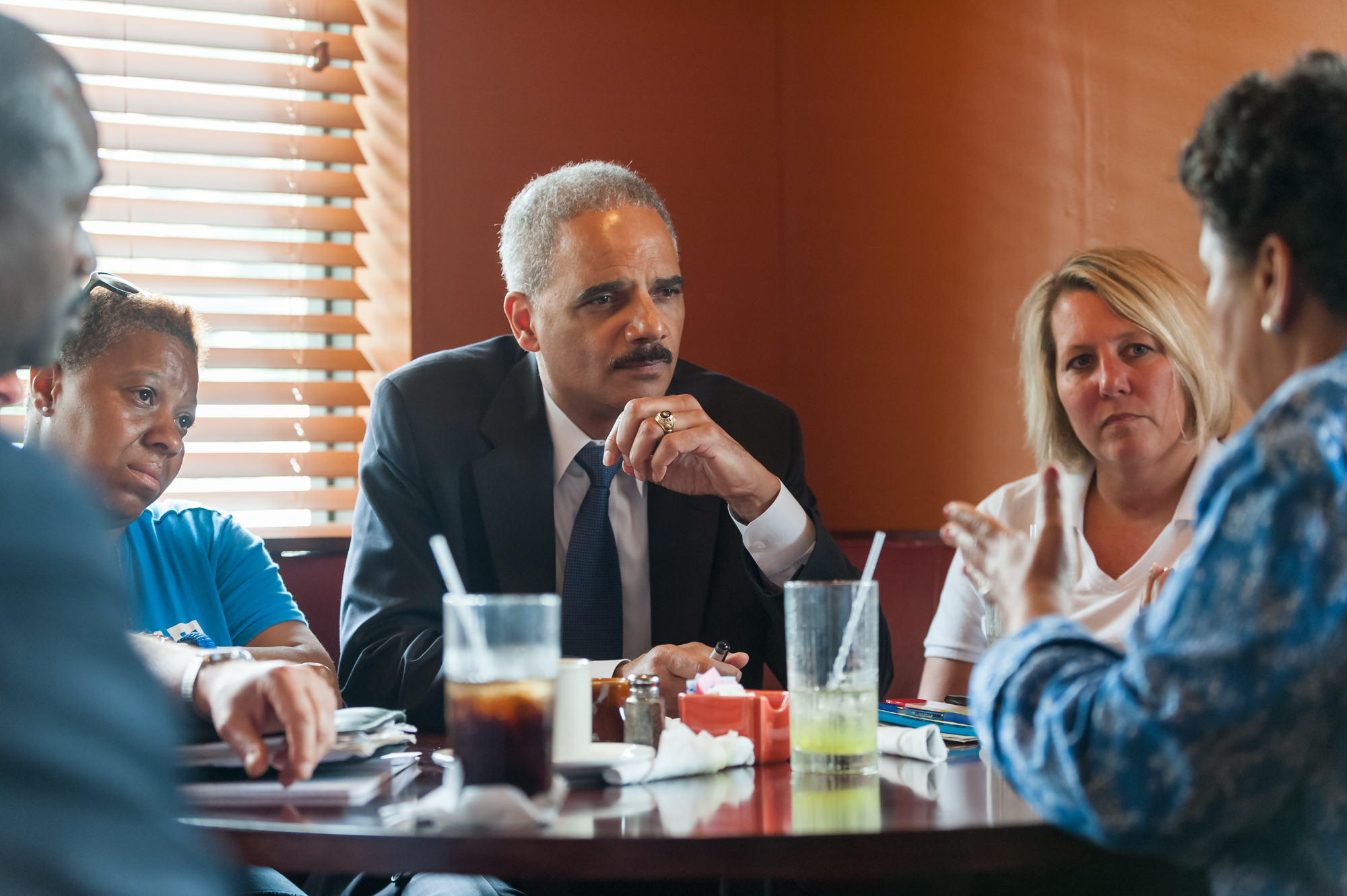 U.S. Attorney General Eric Holder traveled to Ferguson, Missouri yesterday to review the Justice Department's independent investigation into the shooting death of 18-year-old Michael Brown. While there, the Attorney General met with community leaders, FBI investigators, and federal prosecutors to get detailed briefings on the status of the case.

"I've been kept up to date," he said, "but there's nothing that can replace actually coming to the office that's handling the matter, and being able to look in the face the people who are, I think at this point, very ably handling this investigation."

Following the shooting of Michael Brown on August 9, the city of Ferguson has captured countless headlines. Across the country -- and around the world -- people are watching as the Ferguson community continues to grapple with this tragedy.

"The eyes of the nation and the world are watching Ferguson right now," the Attorney General said yesterday at the Florissant Valley Campus of St. Louis Community College. "The world is watching because the issues raised by the shooting of Michael Brown predate this incident. This is something that has a history to it, and the history simmers beneath the surface in more communities than just Ferguson."

"This is something that has a history to it, and the history simmers beneath the surface in more communities than just Ferguson." 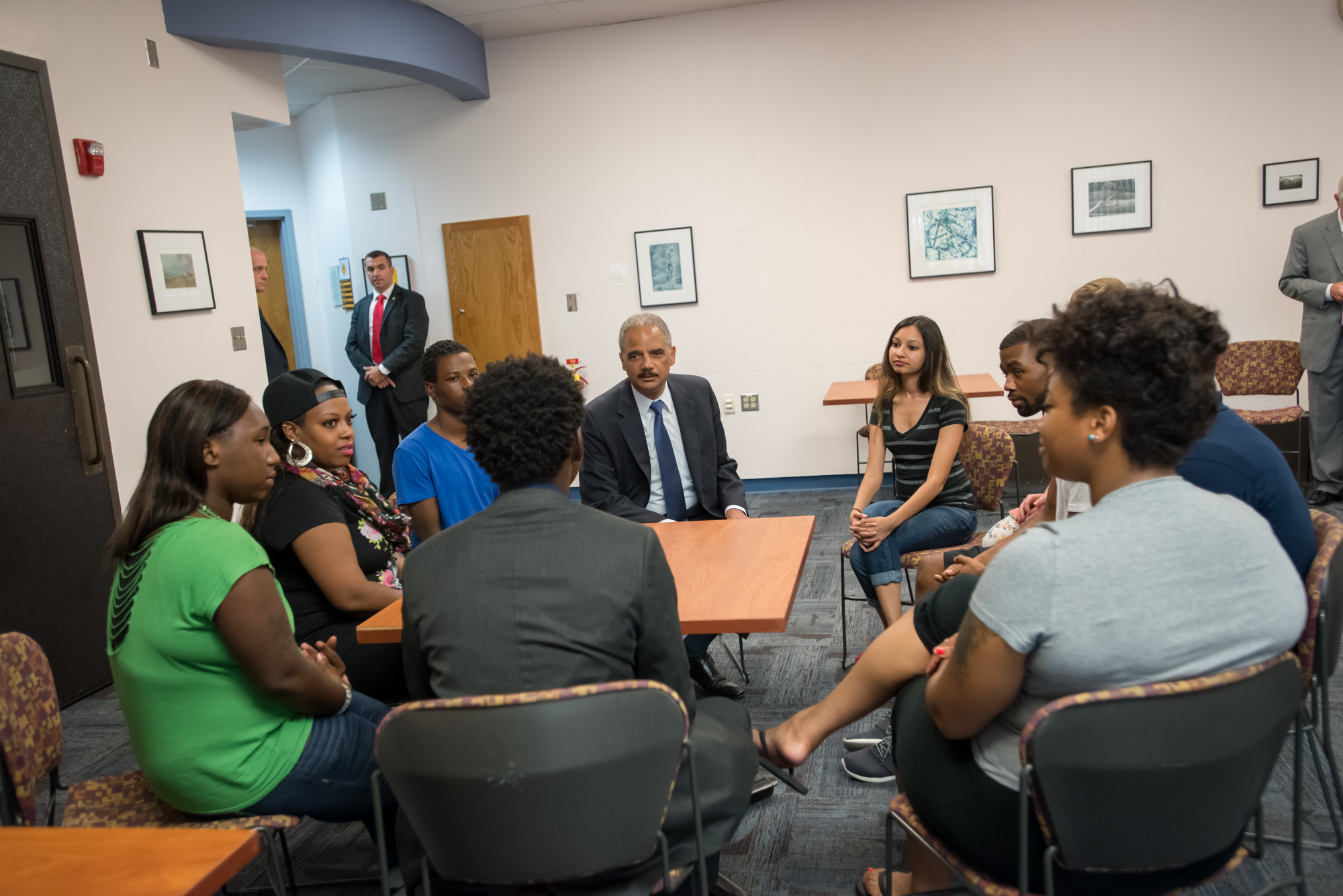 At the community college, Attorney General Holder also talked with some local youth and discussed their concerns about interacting with the police. Even as the nation's chief law enforcement officer, the Attorney General said that he understands their mistrust, recalling some of his past run-ins with the police and the lasting impact of those experiences:

I understand that mistrust. I am the Attorney General of the United States. But I am also a black man. I can remember being stopped on the New Jersey turnpike on two occasions and accused of speeding. Pulled over…“Let me search your car”…Go through the trunk of my car, look under the seats and all this kind of stuff. I remember how humiliating that was and how angry I was and the impact it had on me.

I think about my time in Georgetown – a nice neighborhood of Washington – and I am running to a picture movie at about 8 o’clock at night. I am running with my cousin. Police car comes driving up, flashes his lights, yells “Where you going? Hold it!” I say “Whoa, I’m going to a movie.” Now my cousin started mouthing off. I’m like, “This is not where we want to go. Keep quiet.” I’m angry and upset. We negotiate the whole thing and we walk to our movie. At the time that he stopped me, I was a federal prosecutor. I wasn’t a kid. I was a federal prosecutor. I worked at the United States Department of Justice. So I’ve confronted this myself.

"I am the Attorney General of the United States. But I am also a black man."

After having lunch with local residents and community leaders in Ferguson, Attorney General Holder stopped by the St. Louis FBI field office to get briefed more on the details of the federal investigation.

In remarks at the field office, he detailed that the federal investigation is "looking for violations of federal, criminal civil rights statutes," which is different from the local investigation.

We have brought a substantial number of people here, of agents here, who have done a great job in the canvassing that they did over the past weekend, and continue to follow leads so that we can do a thorough and a fair job of making a determination about what happened on August 9. And I'm confident that through the ability of these people, we will be able to make a determination about whether or not any federal statutes have in fact been violated.

He also expressed his hope that his trip would "have a calming influence on the area, if people know that a federal, thorough investigation is being done" -- and that it would "give people some degree of confidence that the appropriate things are being done by their federal government."

Attorney General Eric Holder receives a briefing at the local FBI headquarters on the ongoing independent civil rights investigation into the shooting of Michael Brown. (by Lonnie Taque, U.S. Department of Justice)

Michael Brown's death has spurred critical dialogue about race, but the Attorney General emphasized that these conversations are only a starting point on the path to bringing about lasting change in America:

We need concrete action to change things in this country. That’s what I have been trying to do. That’s what the President has been trying to do. We have a very active Civil Rights Division. I am proud of what these men and women have done. As they write about the legacy of the Obama administration, a lot of it is going to be about what the Civil Rights Division has done.

So this interaction must occur. This dialogue is important. But it can’t simply be that we have a conversation that begins based on what happens on August 9, and ends sometime in December, and nothing happens. As I was just telling these young people, change is possible. The same kid who got stopped on the New Jersey freeway is now the Attorney General of the United States. This country is capable of change. But change doesn’t happen by itself.

So let’s start here. Let’s do the work today.