The Economy that Built 10 Million Jobs

September 5, 2014 at 2:21 PM ET by Tanya Somanader
Twitter Facebook Email
Summary:
10 million jobs marks more than unprecedented job growth, it is a sign of the industry of the American worker and the strength of an economy that made 10 million jobs possible. 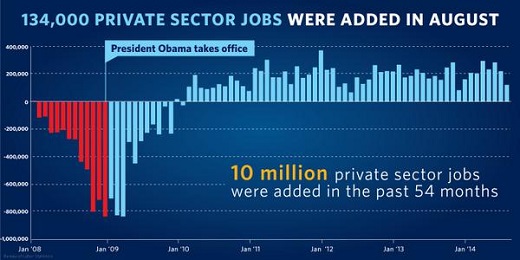 10 million -- that’s the number of jobs American businesses have added over 54 straight months, the longest streak of private-sector job growth in American history. 10 million marks more than strengthening job growth, it is a sign of the industry of the American worker and the strength of an economy that made 10 million jobs possible.

Just look at how far we’ve come over the past five years. When President Obama took office in 2009, the country was in the midst of the Great Recession -- the economy was shedding jobs by the hundreds of thousands, the housing market had hit rock bottom, and the American auto industry was on the brink of collapse. But President Obama took action, and now -- thanks to the grit and resilience of American workers and business owners -- our economy has added more than 10 million jobs and is growing day by day.

From breaking ground on new homes to selling American goods abroad, the growing strength of key economic sectors helped make 10 million jobs possible. While there’s more work to do, take a look at a few of these critical pillars of our economy to see where we stood when President Obama took office and where we are now.

The number of vehicles built on American assembly lines hit a record low in 2009 when our auto industry was facing bankruptcy. President Obama took decisive action to rescue the industry, saving more than 1 million jobs across the country and putting our auto companies back on track to hit their highest rate of production since 2002.

2. Businesses are selling $70 billion more overseas each month than in 2009.

During the recession, the amount of American exports that our companies sold abroad fell by the billions. Exports play a key role in growing our economy and creating good-paying jobs here at home. Under President Obama, our businesses are selling billions in American goods and services exports abroad, which directly support more than 11.3 million jobs.

In 2009, construction of new homes plunged to record lows, the slowest rate in over 50 years. Now, new home construction is rebounding toward pre-recession levels.

4. American consumers are spending $170 billion more each month than in 2009.

The recession forced many consumers to spend more conservatively when faced with a volatile economy. Now, as the economy continues to get stronger, consumers are spending billions more than they did in 2009, helping to spur economic growth.

The President knows there is more work to do to build on this momentum, and that is why he is acting on his own to invest in manufacturing, energy, and infrastructure and to improve the financial security of working families. Find out more about the President’s year of action here, and take a deep dive into the employment situation in August here.