With today’s report, the economy has now added 10 million private-sector jobs over 54 straight months of job growth. This figure is a marker of the progress that has been made, but also a reminder that more must still be done to create jobs, especially for the long-term unemployed, and grow the middle class. Although the pace of job gains in August was below recent months, the broader trends are moving in the right direction. To continue to support the progress our economy has made, the President will act wherever he can to create good jobs, facilitate investments in American infrastructure and manufacturing, and make sure that hard work pays off with higher wages.

1. The private sector has added 10 million jobs over 54 straight months of job growth, extending the longest streak on record. Today we learned that total nonfarm payroll employment rose by 142,000 in August, mainly reflecting a 134,000 increase in private employment. Private-sector job growth was revised up for July and down for June for little total revisions. Over the past twelve months, private employment has risen by a total of 2.4 million. 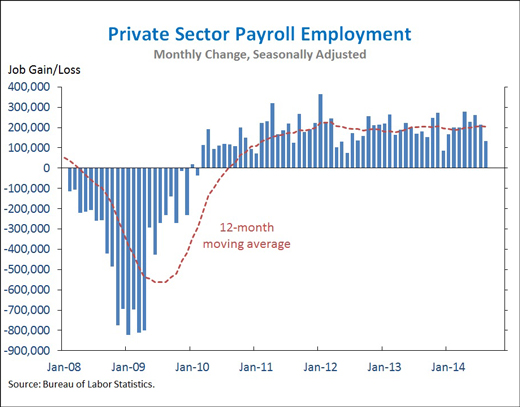 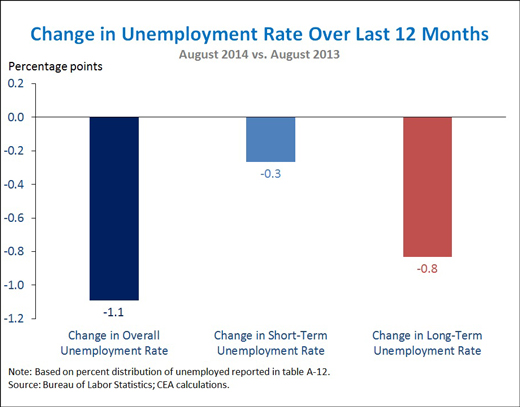 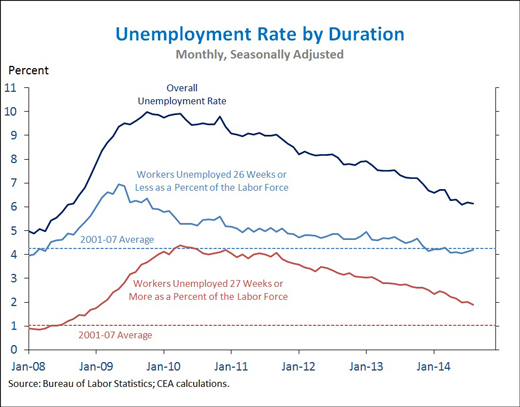 3. The last time the economy added 10 million private-sector jobs over four-and-a-half years was November 1996 to April 2001. There are some notable differences between the current stretch of job gains and the one that began in 1996. In particular, the manufacturing sector has added more than 700,000 jobs over the last four-and-a-half years, while it lost more than 400,000 jobs during the 1996-2001 period. Moreover, the private-sector job gains during the 1996-2001 period coincided with the addition of more than 1.5 million state and local government positions; during the last four-and-a-half years, state and local governments have cut more than 400,000 jobs. The two periods did however have remarkably similar job growth in sectors like health care and social assistance, retail trade, and transportation and warehousing. Finally, it is worth noting that the two periods took place at different stages of the business cycle—in 1996, the economy was well into a period of sustained expansion, but in 2010, it was just starting to recover from the worst crisis since the Great Depression. That is why despite the progress that has been made, the President believes more must still be done to support the recovery and job creation. 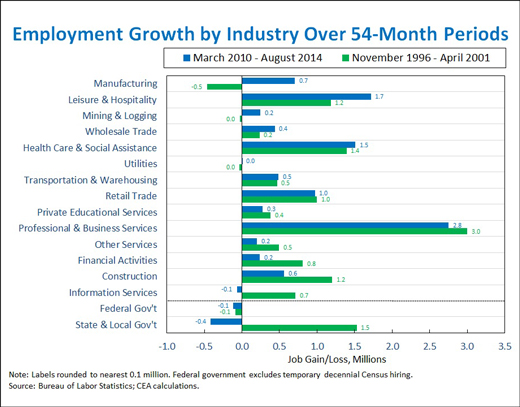 4. On a not-seasonally-adjusted basis, local government educational services employment rose by more than 200,000 in August, continuing a recent trend that has seen an increasing number of these employees return to work before September. During the 1970s and 1980s, the normal seasonal pattern was that local government educational services employment declined in August, before a large back-to-school increase in September. But since the late 1990s, more of the back-to-school increase has come in August, consistent with reports that some school districts are choosing to start the school year earlier. Changing seasonal patterns affect other industries too—for instance, the usual summer retooling that temporarily halts work at auto manufacturing plants in July has been noticeably less pronounced in recent years. These evolutions in seasonal patterns highlight one of the challenges inherent in seasonal adjustment, and are yet another reminder of why it is important not to place too much weight on any one month of seasonally adjusted data. 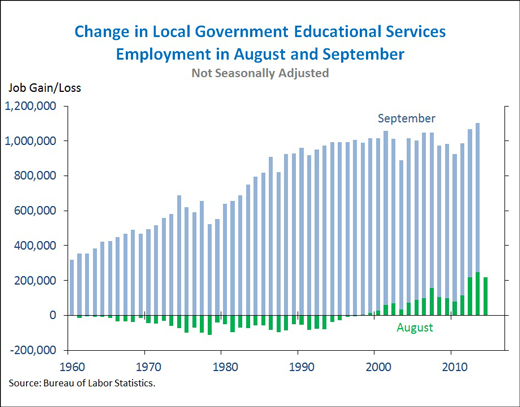 5. The construction and health care sectors saw above-average job growth in August, while retail trade and manufacturing were below their respective averages over the past 54 months. The retail trade industry lost 8,000 jobs, well below an increase of 18,000 per month on average in the last 54 months. Manufacturing and leisure and hospitality also saw below-average job growth, relative to the last 54 months. In contrast, health care and social assistance as well as construction saw above-average job growth. Across the 17 industries shown below, the correlation between the most recent one-month percent change and the average percent change over the last twelve months was 0.62, suggesting that the pattern of job growth across industries in August was a bit more divergent from recent trends than it had been earlier this year. 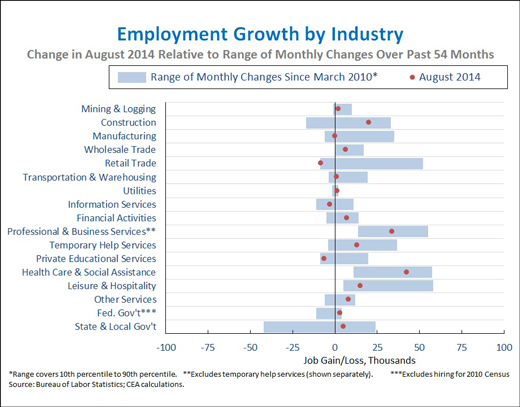