5 Things to Know: The President Lays Out the U.S. Plan to Degrade and Destroy ISIL

September 17, 2014 at 2:58 PM ET by Tanya Somanader
Twitter Facebook Email
Summary:
President Obama travelled to Tampa, Florida to speak to servicemembers at MacDill Airforce Base about the U.S. strategy to degrade ultimately destroy ISIL, a terrorist organization that is killing innocent, unarmed civilians in both Iraq and Syria.

President Obama travelled to Tampa, Florida to speak to service men and women at MacDill Air Force Base about the U.S. strategy to degrade and ultimately destroy ISIL, a terrorist organization that is killing innocent, unarmed civilians  in both Iraq and Syria. ISIL, also known as ISIS or the Islamic State, is also responsible for the brutal murders of American journalists Jim Foley and Steven Sotloff.

"In a world where technology provides a small group of killers with the ability to do terrible harm, it is America that has the capacity and the will to mobilize the world against terrorists,” he told servicemembers. To effectively do so, the U.S. will execute a comprehensive and sustained counterterrorism strategy that will empower the international community and local leaders to decimate these terrorists.

"If you threaten America, you will find no safe haven."

Here are the key points the President made today regarding ISIL and our strategy to defeat their forces:

1. ISIL is threatening America and our allies.

Our intelligence community has not yet detected specific plots from ISIL against our homeland, but they have repeatedly threatened our core interests, including our personnel, our embassies, our consulates, and our facilities in Iraq, Syria, and in the broader Middle East. "If left unchecked, they could pose a growing threat to the United States," he said.

2. The U.S. continues to conduct targeted airstrikes against ISIL.

The U.S. Air Force has conducted more than 160 airstrikes against ISIL, successfully protecting our personnel and facilities, killing ISIL fighters, and giving space for Iraqi and Kurdish forces to reclaim key territory. “They’ve helped our partners on the ground break ISIL sieges; helped rescue civilians cornered on a mountain; helped save the lives of thousands of innocent men, women and children,” the President said.

3. American forces that have been deployed to Iraq do not and will not have a combat mission.

"As your Commander-in-Chief, I will not commit you, and the rest of our Armed Forces, to fighting another ground war in Iraq," the President told servicemembers. Along with our airstrikes, U.S. forces will train, equip, advise, and assist local partners on the ground "so that they can secure their own countries’ futures."

4. This is not and will not be America's fight alone.

The U.S. will lead a broad coalition of countries who have a stake in this fight. France and the UK are already flying with us over Iraq, and other countries have committed to join this effort. Saudi Arabia has agreed to host American efforts to train and equip Syrian opposition forces. Australia and Canada are going to send military advisors to Iraq, while Germany is sending paratroopers to help offer training.  Arab nations have agreed to strengthen their support for Iraq’s new government, a key ally in our strategy to defeat ISIL.

International partners will help us cut off ISIL funding, gather intelligence, and prevent foreign fighters from entering -- or leaving -- the Middle East. And  nearly 30 nations have joined American humanitarian relief to help civilians, including Sunni, Shia, Christian, Yezidi, or other religious minorities, that ISIL has driven from their homes.

5. Congress should provide the authorities and resources the U.S. military needs to succeed.

The President has called on Congress to support our military with the necessary resources to train and equip Syrian opposition fighters. As he has said, America’s leadership position is strongest when the President and Congress work together and show a united front. 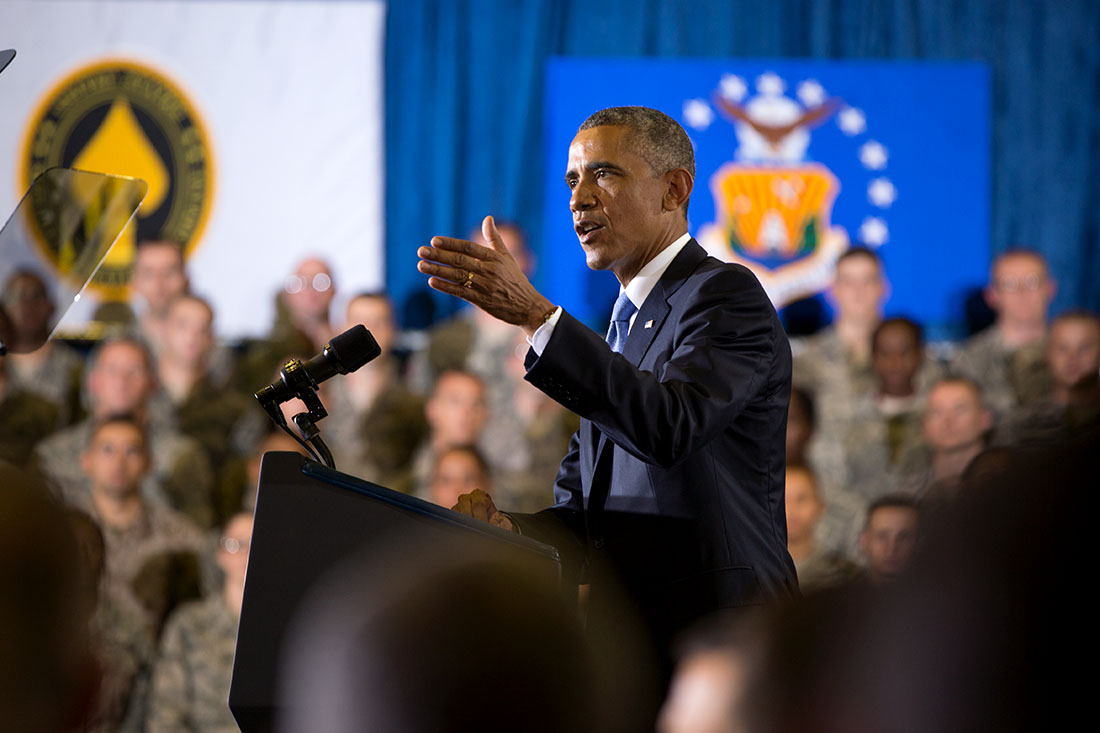 "Sending our servicemembers into harm’s way is not a decision I ever take lightly," the President said. "It is the hardest decision I make as President. Nothing else comes close."

But this strategy will require the best military force in the world:

Frankly, there just aren’t a lot of other folks who can perform in the same ways -- in fact, there are none.  And there are some things only we can do.  There are some capabilities only we have.

That’s because of you -- your dedication, your skill, your work, your families supporting you, your training, your command structure. Our Armed Forces are unparalleled and unique.  And so when we’ve got a big problem somewhere around the world, it falls on our shoulders. And sometimes that’s tough. But that’s what sets us apart. That’s why we’re America. That’s what the stars and stripes are all about.

"In an uncertain world full of breathtaking change, the one constant is American leadership."

And, because of the strength and dedication of America’s military, the President made clear that we will send an unmistakable message to ISIL:

Whether in Iraq or in Syria, these terrorists will learn the same thing that the leaders of al Qaeda already know: We mean what we say; our reach is long; if you threaten America, you will find no safe haven. We will find you eventually.