President Obama to the International Community: We Must Do More to Fight Ebola

September 25, 2014 at 2:35 PM ET by Tanya Somanader
Twitter Facebook Email
Summary:
President Obama has made combating this terrible disease a top national security priority and today, at the United Nations, he called on the world to join the United States in this effort.

The Ebola outbreak afflicting West African countries is now an epidemic of unprecedented proportions. President Obama has made combating this terrible disease a top national security priority and today, at the United Nations, he called on the world to join the United States in this effort.

Ebola is a horrific disease. It’s wiping out entire families.  It has turned simple acts of love and comfort and kindness -- like holding a sick friend’s hand, or embracing a dying child -- into potentially fatal acts. If ever there were a public health emergency deserving an urgent, strong and coordinated international response, this is it.

The President noted how the public health systems in Sierra Leone, Liberia, and Guinea have collapsed, making the outbreak a regional and potentially global threat. Health workers on the front lines are in desperate need of more aid – from beds, to supplies, to more helping hands.

"One health worker in Sierra Leone compared fighting this outbreak to 'fighting a forest fire with spray bottles.' But with our help, they can put out the blaze."

The Centers for Disease Control and Prevention (CDC) is launching the largest international response in its history. President Obama has also directed the U.S. military to establish a command in Liberia which is now up and running, moving in personnel, equipment, and supplies. The U.S. is working with Sierra Leone to create an air bridge that will get health workers and medical supplies to the region faster, and we’re setting up new treatment centers, a field hospital, and a training facility to help bolster the number of health workers on the ground.

The U.N. also announced a new mission for Ebola Emergency Response to bring all of the U.N.’s resources into the fight. “So this is all progress, and it is encouraging,” the President said. "But I want us to be clear: We are not moving fast enough."

Right now, everybody has the best of intentions, but people are not putting in the kinds of resources that are necessary to put a stop to this epidemic. There is still a significant gap between where we are and where we need to be. We know from experience that the response to an outbreak of this magnitude has to be fast and it has to be sustained.  It’s a marathon, but you have to run it like a sprint. And that’s only possible if everybody chips in, if every nation and every organization takes this seriously. Everybody here has to do more.

International organizations have to move faster, and cut through red tape and mobilize partners on the ground as only they can. More nations need to contribute critical assets and capabilities -- whether it is air transport, or medical evacuation, or health care workers, or equipment, or treatment. More foundations can tap into the networks of support that they have, to raise funds and awareness. More businesses, especially those who already have a presence in the region, can quickly provide their own expertise and resources, from access to critical supply chains to telecommunications. And more citizens -- of all nations -- can educate themselves on this crisis, contribute to relief efforts, and call on their leaders to act.  So everybody can do something. That’s why we’re here today. 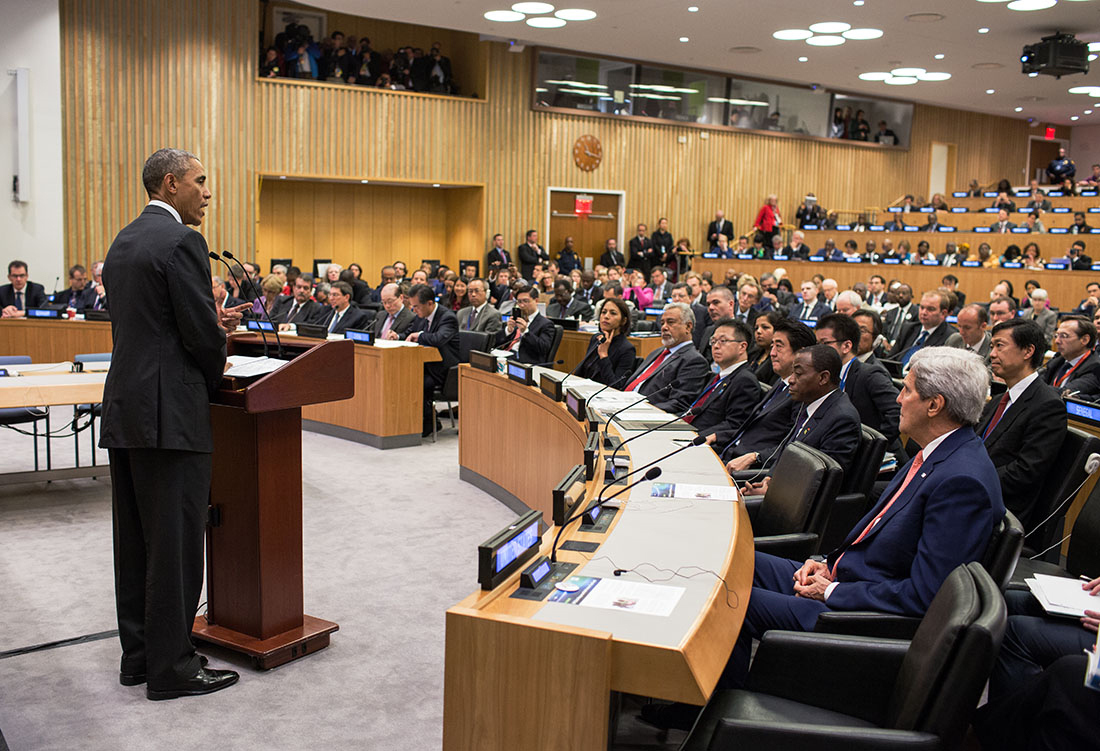 From fighting the current epidemic to preventing future threats, the President called on the international community to give these public health threats the urgency they require. That is why he is hosting 44 nations in Washington, D.C. next week to advance the Global Health Security Agenda.

The outbreak is such where at this point more people will die. But the slope of the curve, how fast we can arrest the spread of this disease, how quickly we can contain it is within our control. And if we move fast, even if imperfectly, then that could mean the difference between 10,000, 20,000, 30,000 deaths versus hundreds of thousands or even a million deaths.

"Do not stand by, thinking that somehow, because of what we’ve done, that it’s taken care of," the President said to the gathered nations. "It’s not. And if we don’t take care of this now, we are going to see fallout effects and secondary effects from this that will have ramifications for a long time, above and beyond the lives that will have been lost."

Learn more about what the U.S. is doing to help combat the Ebola outbreak: