What You Need to Know: Our Push To Get Long-Term Unemployed Americans Back to Work

October 15, 2014 at 9:37 AM ET by Tanya Somanader
Twitter Facebook Email
Summary:
Who exactly are the long-term unemployed, what are the challenges they face to finding work, and what is President Obama doing to help put people back to work? Here are a few answers to important questions about long-term unemployment in America:

Thanks to the grit and resilience of American workers and business owners, our economy is getting stronger every day. Over the last 55 months, we've added 10.3 million jobs -- the longest streak of private-sector job growth on record -- and the number of job openings rose to its highest level in more than 13 years. We've put more people back to work than Japan, Europe, and every other advanced economy combined and the unemployment rate is falling at a faster pace than predicted.

But one of the greatest challenges from the recession was the rise in long-term unemployment. The Great Recession left too many Americans out of a job through no fault of their own and many continue to search for work. Our strong economic growth is beginning to help.

Since December 2013, the number of long-term unemployed has fallen by 900,000, accounting for about 90 percent of the total drop in unemployment in the past 10 months. 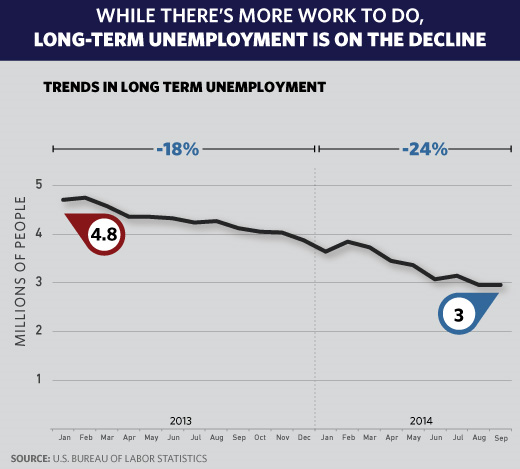 1. How long do you actually have to be unemployed to be considered "long-term unemployed"?

Long-term unemployed Americans have typically been looking for work for 27 weeks or more.

2. Who are the people who are facing long-term unemployment? 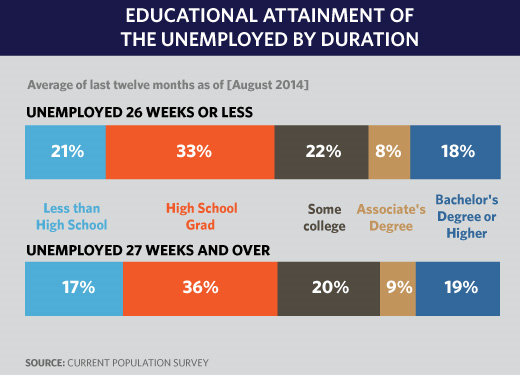 3. Why is it so hard for long-term unemployed Americans to find work compared to those who are only unemployed for the short-term?

And perhaps the most important question of all: What is the President doing to help the long-term unemployed Americans get back to work?

In his State of the Union address this year, President Obama issued a three-part call to action – to employers, to communities, and to federal agencies -- to help these Americans find jobs. Here's a look at the progress we're making on these three initiatives:

Click here to see a full list of participating businesses and to learn more about how we're working with them to put people back to work.

Click here to see a full list of winning intiatives that are helping to fit the right worker with the right job.

Click here to see OPM's "mythbuster" on federal hiring policies and here to learn more about what agencies are doing to update their employment guidance.

As more jobs are created, it is critical that Americans with the skills, experience, and a desire to work have every opportunity to get back to work and maximize their full potential, and that our businesses find the new workers they need to compete and grow. That is why the President will continue to take action and work with America’s business community to ensure that every American feels the benefits of our growing economy in their own lives.