America’s Next Top Turkey: Vote for the 2014 National Thanksgiving Turkey

November 26, 2014 at 9:30 AM ET by Kori Schulman
Twitter Facebook Email
Summary:
On Wednesday, November 26th, President Obama will announce the National Thanksgiving Turkey and, once again, we’re inviting the American people to decide which bird takes the title.

On Wednesday, November 26th, President Obama will announce the National Thanksgiving Turkey and, once again, we’re inviting the American people to decide which bird takes the title.

Since at least the 19th century, Americans have been sending turkeys to the President for the holidays. As part of a more recent tradition that began in 2012, the National Thanksgiving Turkey will be chosen by the public through an online vote. This year’s top turkeys, Mac and Cheese, are going beak-to-beak on Twitter -- and it's up to you to decide who will be America's next top turkey.

Mac and Cheese flock from Cooper Farms in Oakwood, Ohio. Mac's got a grand champion style strut and his gobble has a country ring to it. Cheese is a feather-shaker with a rhythmic gobble that loves to cheese it up for the the cameras.

Which turkey has what it takes?

Are you on #TeamMac or #TeamCheese? Starting now, the turkeys are going beak-to-beak on Twitter, so get your vote in by 1:00pm ET on Wednesday, November 26th.

Then, be sure to tune in to President Obama's remarks at the Presentation of the National Thanksgiving Turkey at 2:15 pm ET at http://wh.gov/live and follow @WhiteHouse on Twitter to find out the winner. 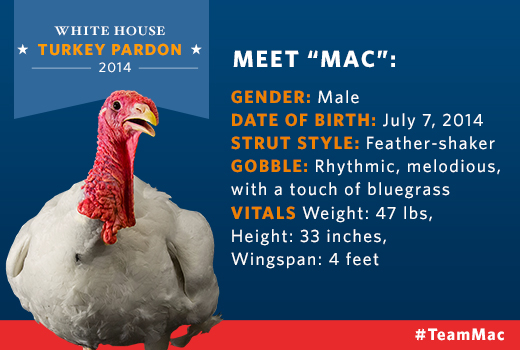 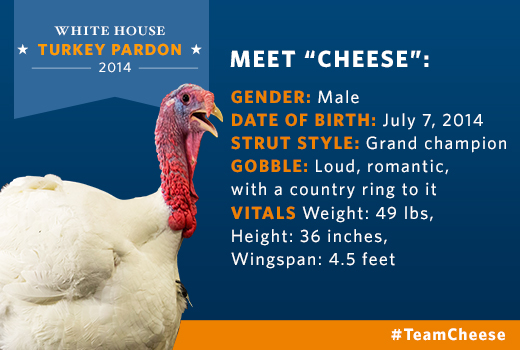 Note: It's all gravy, no turkeys will be harmed during the selection of the National Thanksgiving Turkey. After the pardoning, both turkeys will travel to their permanent home at Morven Park's Turkey Hill, the historic turkey farm located at the home of former Virginia Governor Westmorland Davis in Leesburg, Virginia.