Chart of the Week: Higher-Wage Industries are Adding More Jobs

December 12, 2014 at 11:15 AM ET by Tanya Somanader
Twitter Facebook Email
Summary:
Take a look at the chart of the week to see which industries that offer higher incomes have added more jobs over the course of this year.

This holiday season, our economy is ringing in some good news: The U.S. is outpacing much of the world in putting people back to work. Over the first 11 months of 2014, our economy has created 2.65 million jobs -- more than in any year since the late 1990s. Businesses have created 10.9 million jobs over the past 57 months in a row, extending the longest streak of private sector job growth on record. Over the last four years, we’ve put more people back to work than Europe, Japan, and all other industrialized nations combined.

The President is also committed to making sure that all hardworking Americans can see this progress in their paycheck. That is why the latest jobs report was so encouraging -- the pickup in the pace of job growth in 2014 has been in industries that pay higher wages.

Take a look at the chart to see which industries that offer higher incomes have added more jobs over the course of this year: 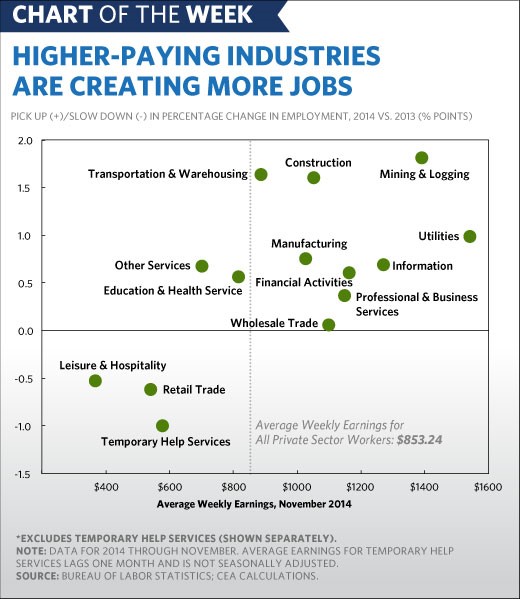 For instance, the pace of manufacturing job growth has more than doubled to 15,000 per month this year, from 7,000 per month last year, and average weekly earnings for manufacturing workers are about $170 higher than for all private-sector workers. In contrast, the industries that have seen slower job growth this year are lower-paying sectors on average, like retail trade, leisure an hospitality, and temporary help services.

There is still more work to do to boost wage growth and make sure every American can feel the benefits of our growing economy. President Obama is working with Congress on investments that will support the creation of higher-paying jobs -- from investing in infrastructure and raising the minimum wage to reforming our tax code and passing comprehensive immigration reform.

Learn more about the economic progress we’ve made this year here.