Launching Disasters.Data.Gov to Empower First Responders and Survivors with Innovative Tools and Data

December 15, 2014 at 12:31 PM ET by Meredith Lee, Heather King, and Brian Forde
Twitter Facebook Email
Summary:
Today marked the launch of the new disasters.data.gov web portal, a new public resource that fosters collaboration and the continual improvement of disaster-related open data, free tools, and new ways to empower first responders, survivors, and government officials with the information needed in the wake of a disaster. The Administration is also unveiling the first in a series of Innovator Challenges that highlight pressing needs from the disaster preparedness community.

Strengthening our Nation’s resilience to disasters is a shared responsibility, with all community members contributing their unique skills and perspectives. Whether you’re a data steward who can unlock information and foster a culture of open data, an innovator who can help address disaster preparedness challenges, or a volunteer ready to join the “Innovation for Disasters” movement, we are excited for you to visit the new disasters.data.gov site, launching today.

First previewed at the White House Innovation for Disaster Response and Recovery Initiative Demo Day, disasters.data.gov is designed to be a public resource to foster collaboration and the continual improvement of disaster-related open data, free tools, and new ways to empower first responders, survivors, and government officials with the information needed in the wake of a disaster. 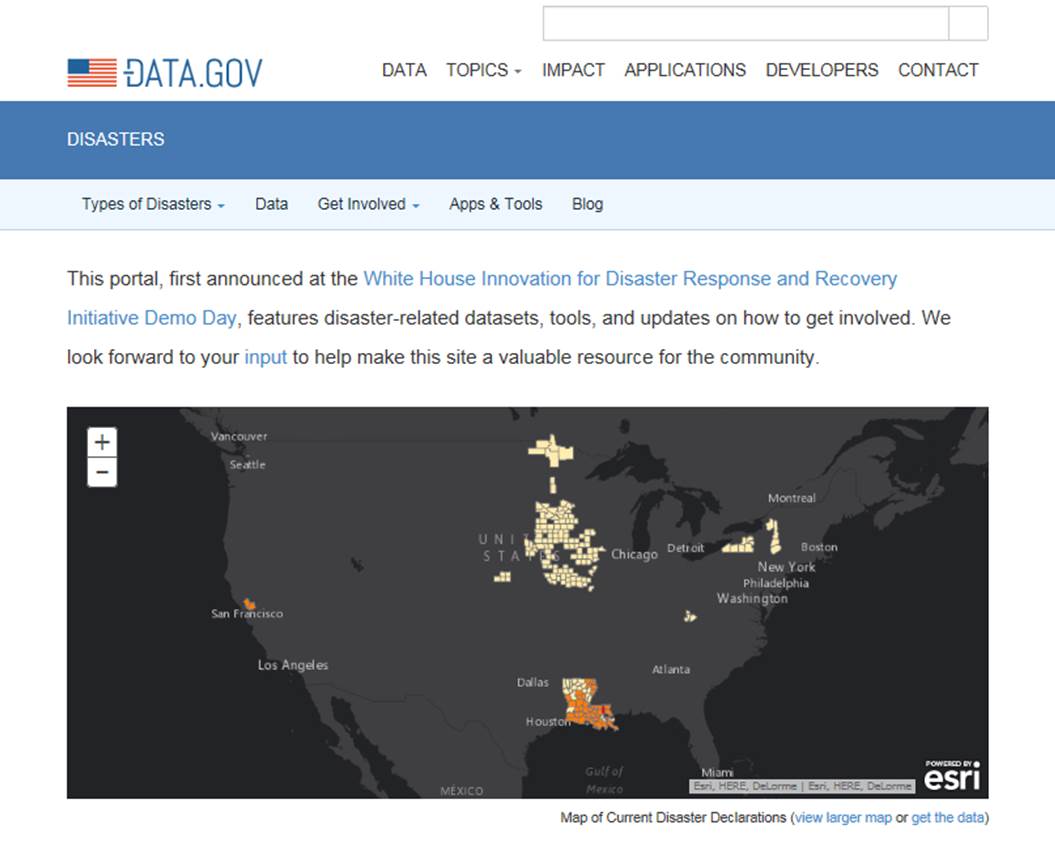 A screenshot from the new disasters.data.gov web portal.

Today, the Administration is unveiling the first in a series of Innovator Challenges that highlight pressing needs from the disaster preparedness community. The inaugural Innovator Challenge focuses on a need identified from firsthand experience of local emergency management, responders, survivors, and Federal departments and agencies. The challenge asks innovators across the nation: “How might we leverage real-time sensors, open data, social media, and other tools to help reduce the number of fatalities from flooding?”

In addition to this first Innovator Challenge, here are some highlights from disasters.data.gov:

The White House Innovation for Disaster Response and Recovery Initiative was launched by the Administration in response to Hurricane Sandy to find the most effective ways for technology to empower survivors, first responders, and all levels of government with critical information and resources. After over two years of continued dialogue and major commitments from the public and private sector, the first hardware hackathon for disaster preparedness held in support of the Initiative, and numerous workshops, we are thrilled to launch disasters.data.gov as the Initiative’s first major online presence.

Disasters.data.gov seeks to leverage the creativity and social entrepreneurship of innovators everywhere to help strengthen national preparedness. The Administration will continue working to shape the portal into a useful “go-to” resource that captures a diverse range of contributions in disaster preparedness technology and innovation. We invite you to take the site for a spin, email disastertech@ostp.gov with your feedback, and get involved to help build a more resilient community.

Meredith Lee is an AAAS Science and Technology Policy Fellow at the U.S. Department of Homeland Security.

Heather King is Director for Preparedness Policy at the National Security Council.

Brian Forde is Senior Advisor for Mobile and Data Innovation at the White House Office of Science and Technology Policy.