4.5 Million Young Adults Have Gained Coverage Since 2010, Improving Access to Care and Benefitting Our Economy

January 29, 2015 at 9:34 AM ET by Jason Furman and Matt Fiedler
Twitter Facebook Email
Summary:
From the time the first of a variety of provisions helping young adults took effect in 2010 through the second quarter of 2014, the uninsured rate among young adults dropped by more than 40 percent, corresponding to 4.5 million additional insured young adults.

Young adults historically faced unique challenges in obtaining health insurance coverage. In 2009, nearly one-third of young adults ages 19-25 lacked health insurance, more than twice the rate for Americans overall. But the nation has since made dramatic progress in expanding coverage among young adults, thanks to the Affordable Care Act’s provision allowing young adults to remain on a parent’s plan through age 26 and its broader expansion of coverage through the Health Insurance Marketplaces and Medicaid.

From the time the first of these provisions took effect in 2010 through the second quarter of 2014, the uninsured rate among young adults dropped by more than 40 percent, corresponding to 4.5 million additional insured young adults. These large gains among young adults are a major reason that the nation’s overall uninsured rate was at or near the lowest level ever recorded as of the second quarter of last year. Moreover, there is evidence young adults’ expanded access to coverage is increasing their access to health care, improving their health and financial security, and potentially generating long-term benefits for our economy.

Even with this progress, almost one in five young adults remains uninsured. But many of these young adults are eligible for financial assistance to obtain coverage through the Health Insurance Marketplaces or eligible for coverage through Medicaid. This year’s Open Enrollment period ends on February 15th, so those still without insurance should visit HealthCare.gov or call 1-800-318-2596 to get covered now.

This landscape left many young adults with few affordable, accessible options. Some could seek coverage under a parents’ plan, but non-students and older students frequently were not eligible for dependent coverage. Others could seek to purchase coverage on the individual market, but such coverage was often unaffordable or outright unavailable before the Affordable Care Act, particularly for individuals with pre-existing health conditions. It is thus unsurprising that young adults had the highest uninsured rate of any age group. As of 2009, 32.7 percent of young adults ages 19-25 were uninsured, more than twice the 15.4 percent uninsured rate for the population as a whole. 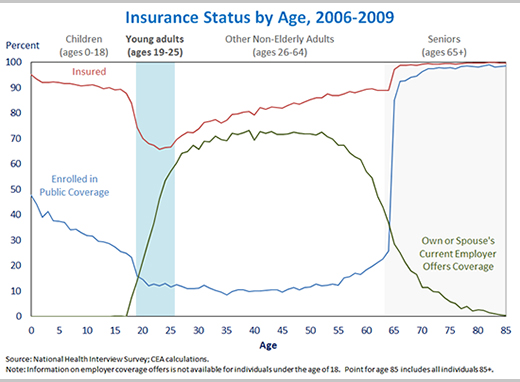 The Affordable Care Act has greatly expanded the insurance options available to young adults. Starting in late September 2010, the law allowed young adults to remain on a parent’s health insurance plan until turning age 26. Following that change, the uninsured rate among young adults ages 19 to 25 -- the age group affected by the expansion—fell sharply, even as the uninsured rate among other non-elderly adults remained basically flat. On the basis of this contrast, multiple groups of researchers have concluded that the coverage gains for young adults during this period were directly attributable to the Affordable Care Act provision.

The law’s broader coverage provisions, including the opportunity for states to expand their Medicaid programs, insurance market reforms, and financial assistance for eligible individuals purchasing coverage through the Health Insurance Marketplaces, took effect at the beginning of 2014. As CEA has noted previously, thanks to these provisions of the law, 2014 saw the sharpest decline in the nation’s uninsured rate in four decades, with further declines likely in the years ahead. Young adults were no exception and, in fact, experienced larger gains than other age groups over this period.

In total, from the four quarters preceding the Affordable Care Act’s dependent coverage expansion through the second quarter of 2014, the uninsured rate for young adults has fallen by 14.8 percentage points, a reduction of more than 40 percent that translates into 4.5 million additional young adults with health insurance coverage. These gains have eliminated more than two-thirds of the gap in uninsured rates between young adults and other non-elderly adults, even as other non-elderly adults also experienced large coverage gains during 2014. 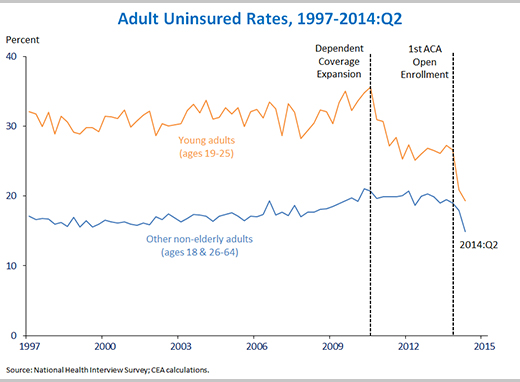 An extensive body of economic evidence demonstrates that having health insurance improves access to health care, financial security, and health. Researchers have now begun to look at the Affordable Care Act’s dependent coverage expansion specifically and have found evidence that it is generating all of these benefits. To do so, researchers have generally compared trends for young adults ages 19-25, who were affected by the early dependent coverage expansion, to trends for slightly older adults, who were not.

This work has found strong evidence that the dependent coverage expansion increased young adults’ access to health care. In particular, the expansion reduced the likelihood that young adults had delayed or forgone care due to cost in the last 12 months, a finding illustrated by the sharp reduction in this measure for 19-25 year olds relative to slightly older adults. Other work has concluded that the expansion increased young adults’ ability to obtain inpatient and mental health care, while possibly reducing emergency department utilization.

To date, less research has examined the consequences for young adults’ health and financial security. One study that did examine these outcomes found, however, that the expansion increased the share of young adults reporting excellent mental and physical health, while reducing young adults’ exposure to out-of-pocket costs. 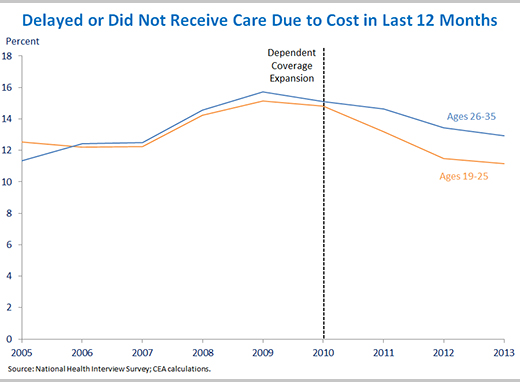 Before the Affordable Care Act, many people’s only source of health insurance coverage was through their workplace. This could trap workers in jobs that offered health insurance, rather than allowing them to make the employment choices that best matched their career and life plans, reducing economic efficiency. This phenomenon is often referred to as “job lock.” The economic consequences of job lock may be particularly serious for young workers, both because young workers are particularly likely to want to take time out of the labor force to pursue schooling and because early-career job matches may have a large effect on long-term career trajectories.

Intriguing evidence on the labor market effects of expanding coverage to young adults comes from a recent study that examined pre-Affordable Care Act state laws that allowed some young adults to remain on a parent’s plan at older ages. These state laws were typically narrower than the Affordable Care Act provision since they generally did not apply if the young adult’s parent received coverage through a large employer. However, these laws have been in effect for a much longer period, making it possible to examine longer-term labor market consequences.

This study concluded that living in a State with a dependent coverage law during young adulthood increased educational attainment, at least for men, and boosted men’s and women’s wages later in adulthood by more than 1.5 percent on average. A 1.5 percent wage increase translates into about $650 per year for the typical full-time, year-round worker. Because the Affordable Care Act’s coverage expansions benefit a broader swath of young adults (including young adults whose parents work at large employers and young adults whose parents do not have coverage), its long-term labor market benefits could be even larger. While this study is not the last word on this topic, the results imply that the long-term economic benefits of expanding young adults’ coverage options are an important area for further research.