Chart of the Week: Businesses Are Ready to Hire More Americans Now Than at Any Point Since 2001

January 30, 2015 at 4:20 PM ET by Tanya Somanader
Twitter Facebook Email
Summary:
Whether in information technology, health care, or other growing industries, there are more jobs now that offer higher wages and an important step up into the middle class. Here’s the chart to prove it.

Six years after the financial crisis, America’s resurgence is real and beginning to touch more and more lives across the country. As the President said, “With a growing economy, shrinking deficits, bustling industry, and booming energy production, we have risen from the recession freer to write our own future than any other nation on Earth.”

America’s businesses are already setting pen to paper, creating jobs in burgeoning industries at a breakneck pace. In fact, there are more open jobs today than at any point since 2001.

Whether in information technology, health care, or other growing industries, there are more jobs now that offer higher wages and an important step up into the middle class. Here’s the chart to prove it: 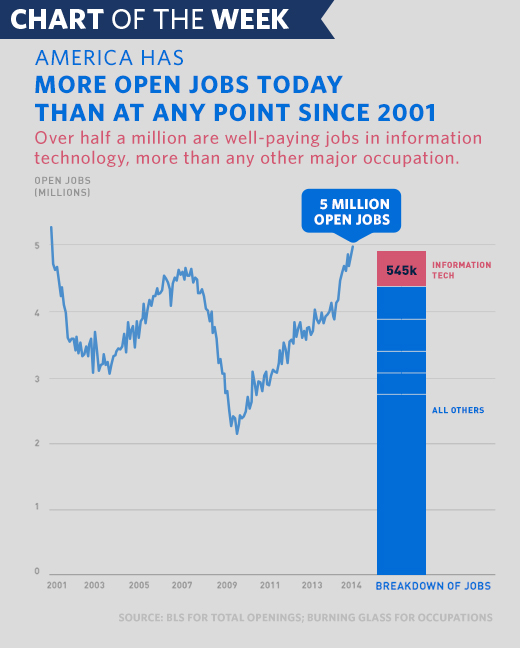 Now, to ensure that millions of Americans can take advantage of these new opportunities, it is crucial that they have the know-how to fill the positions. That’s why the President is committed to investing in what works: middle-class economics, or the idea that this country does best when everyone gets a fair shot to find security in a world of constant change.

To do that, the President is proposing these clear-cut ways to help Americans get ahead and learn the skills they need to earn higher-paying jobs in the 21st century economy:

Watch the President’s Enhanced State of the Union address to learn -- and see -- more about his vision for America’s future: WhiteHouse.gov/SOTU