March 6, 2015 at 6:25 PM ET by David Hudson
Twitter Facebook Email
Summary:
President Obama, the First Lady, and their daughters are traveling to Selma to mark the 50th anniversary of the 1965 marches. Visit WhiteHouse.gov/Selma to see additional content related to the marches.

Fifty years ago, in March of 1965, thousands of Americans marched from Selma, Alabama to the capital city of Montgomery. They marched to ensure that African Americans could exercise their constitutional right to vote -- even in the face of a segregationist system that wanted to make it impossible.

Many of them were beaten, bloodied, and knocked unconscious at the hands of state troopers and county members. But they kept marching.

Because of their efforts, Congress passed the Voting Rights Act just a few months later. The Voting Rights Act was designed to eliminate legal barriers at the state and local level that prevented African Americans from exercising their right to vote -- after nearly a century of unconstitutional discrimination.

To mark the 50th anniversary of the marches, the First Family will travel to Selma tomorrow, with President Obama delivering remarks on the Edmund Pettus Bridge. Tune in tomorrow afternoon to watch the President's remarks live at WhiteHouse.gov/Selma -- a new interactive page that also features additional content related to the marches. 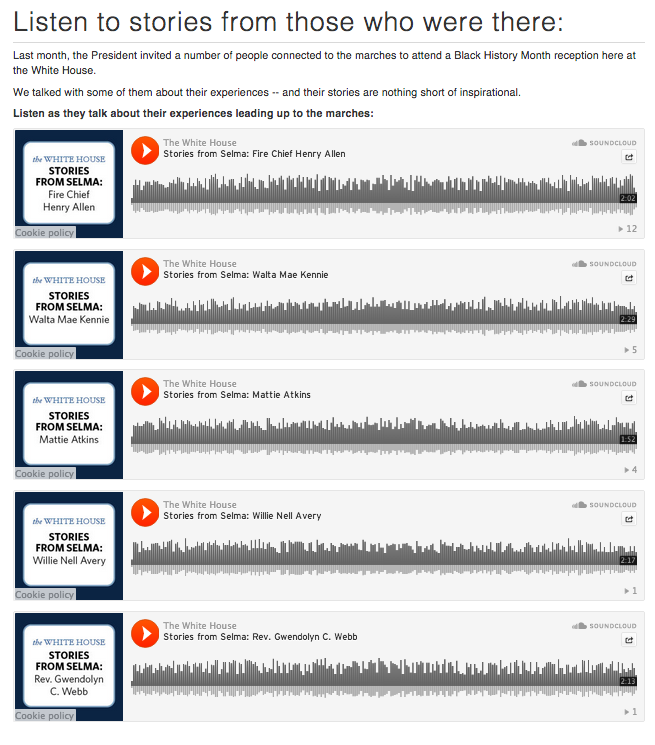 Along with telling some of the history behind the marches, the new page features special audio interviews with people that were connected to the original marches.

They sat down with us and shared their experiences leading up to the marches, gave us their thoughts on the challenges facing today's generation, and explained what it meant to them to be invited here to the White House.

Simply put, their stories are nothing short of inspirational.

But as they made clear in their interviews, we still have more work to do. And it's crucial that we remain just as committed to change as we were then.

So head over to WhiteHouse.gov/Selma and learn about the history of the marches. Listen to the stories of those who marched. And most importantly, tell us how you'll honor their legacy and #MarchOn.