Today, I had the honor to speak before the Economic Club of Washington, D.C. on the economy and the President’s FY 2016 Budget. I made three key points that I believe should frame the budget debates going forward: (1) we have made both near-term and medium-to-long term fiscal progress; (2) the President’s FY16 Budget prioritizes both fiscal responsibility and economic growth; and, (3) we face a critical choice in whether we will return to austerity or continue the economic progress we’ve seen. I would like to dig into the first point a bit more here than I was able to do in my speech and explain the medium and long term fiscal progress we’ve made.

The President’s Budget provides official projections for spending, revenues, deficits, and debt over the next 10 years, reflecting the President’s proposed policies, including ending sequestration, investing in growth and opportunity, and reducing deficits and debt. But each year, the Budget also includes projections for the path of the Nation’s finances over the longer term. These long-term projections are highly uncertain, because they are driven by economic, demographic, and other predictions for the next 25 years. However, they can still provide valuable information about key fiscal trends. This year’s Analytical Perspectives chapter on the long-term budget outlook has three main findings.

1. The medium-term and long-term budget outlook have improved substantially over the last five years. Since the President took office, deficits as a share of the economy have fallen by about two thirds. Less well known, but equally as important, projected deficits and debt have also fallen substantially. 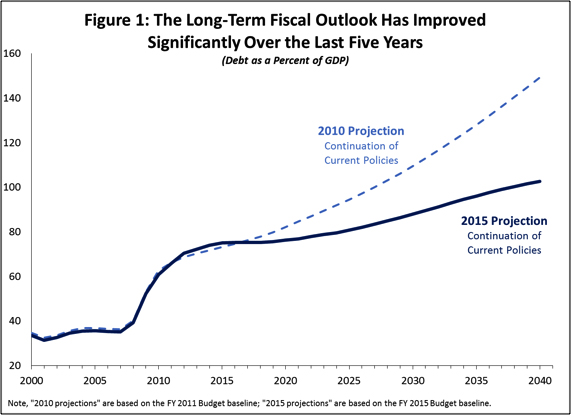 Figure 1 shows projected debt as a share of GDP under a continuation of current policies – that is, without any of the deficit reduction measures proposed in the President’s Budget. As of February 2010, OMB’s current-policy forecast showed debt climbing to nearly 150 percent of GDP by 2040. Our 2015 projections still show an unsustainable fiscal outlook under current policies, with debt rising to about 100 percent of GDP. But they also show a very large improvement over the last five years. (Both the 2010 and the 2015 forecasts rely on projections by the independent Social Security and Medicare Actuaries for those programs.)

Another way to quantify the improvement is to look at the 25-year fiscal gap, a measure of the change in policy needed to stabilize debt as a share of the economy over a 25-year period. As of 2010, stabilizing debt for 25 years would have required average annual increases in revenues or cuts in non-interest spending equal to 2.4 percent of GDP, over $400 billion per year in today’s terms. Today, the change needed is 1.1 percent of GDP – less than half that amount.

2. The improvement in the budget outlook is mostly the result of lower projected health spending, higher revenues, and reductions in discretionary spending. Since July 2010, OMB’s estimate of the 2020 deficit under current policies has come down by $491 billion, or about 40 percent. Figure 2 shows the key factors driving that improvement: 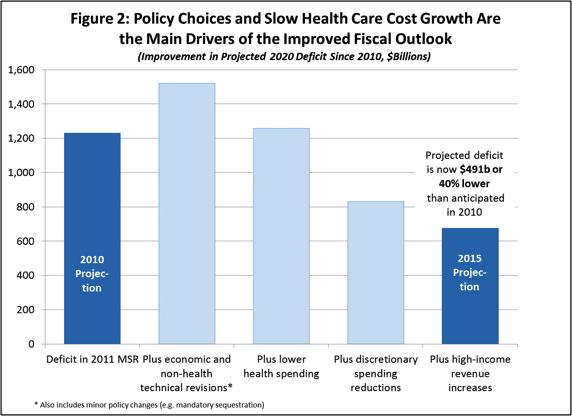 While it is difficult to precisely account for all the factors bringing down deficits beyond 2020, the major drivers behind the improvement are the same: lower projected health care costs, revenue increases from ATRA, and lower discretionary spending.

3. The deficit reduction measures proposed in the President’s Budget would have an even larger fiscal impact over the long run than over the next 10 years. Compared to continuing current policies as assumed in the estimates above, the President’s Budget achieves $1.8 trillion in deficit reduction over the next 10 years ($2.2 trillion counting additional savings from winding down wars). These savings come mostly from:

As shown in Figure 3, the Budget’s deficit reduction proposals are sufficient to stabilize and begin bringing down debt not just over the next 10 years but over the next 25, the period in which the fiscal impact of the Baby Boom Generation’s retirement will be fully felt. 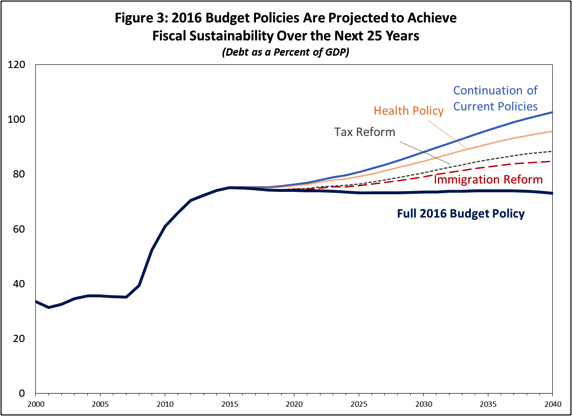 These projections represent our current best estimates for the Federal budget. But as noted above, they are highly uncertain. The more complete Analytical Perspectives analysis shows how the projections could change for the worse if economic, demographic, or other conditions turned out to be less favorable than expected. Conversely, the projections could turn out to be too pessimistic – especially if the proposals in the President’s Budget are enacted and have their intended effects on investment, labor force participation, and productivity growth. The projections thus underscore the importance of coupling continued fiscal progress with fiscally responsible investments in accelerating growth, supporting work, and raising long-run productivity, as the President’s Budget proposes to do.

Shaun Donovan is Director of the Office of Management and Budget.