Citizen Science is Everywhere, including the White House

March 25, 2015 at 12:04 PM ET by Jenn Gustetic, Lea Shanley, and John McLaughlin
Twitter Facebook Email
Summary:
At the 2015 White House Science Fair yesterday, President Obama hosted outstanding young scholars from across the country to celebrate their achievements in science, technology, engineering, and math (STEM), including scholars participating in citizen science projects. This week, the White House made its first foray into citizen scientist by establishing a rain gauge in the First Lady's Kitchen Garden that will share information with a national network for precipitation data.

Millions of volunteers across our Nation actively contribute valuable time and expertise to help advance our understanding of the world around us.  Through citizen science, members of the public can participate in the scientific process, including identifying research questions, making new discoveries, collecting and analyzing data, interpreting results, developing technologies and applications, and solving complex problems.  Equipped with interactive web tools and readily-available tools like cell phone cameras and water-quality test kits, citizen scientists collect data and act on the results to accomplish fascinating and important work: from determining the structure of an AIDS-related enzyme to support development of new medications, to mapping the 3D structure of neurons in the brain. Through citizen science, the public also has discovered a new class of galaxy (the rare “green pea” galaxies), and helped to map the surface of Mars.

This week, the White House hosted the 5th annual White House Science Fair. One of the student exhibitors demonstrated the impact citizen science can have on both learning and research outcomes. High school senior Tiye Garrett-Mills Tiye investigated more economically viable and efficient ways to create images of the vein systems in leaves.

"One of the reasons why this project is important is because recently in science there has been a big leap to get citizens in science… because there simply aren’t enough scientists to do it so. So, by having citizens collect data, scientists can analyze it and draw their own conclusions. So the thing about this process is everyone has a phone these days, so it’s easy to have access to that and a scanner is basic office supplies. So if I was just able to teach people this technique we could have citizens uploading images of leaf venation systems into their computers and we could pick the best ones and use them online for the registry." 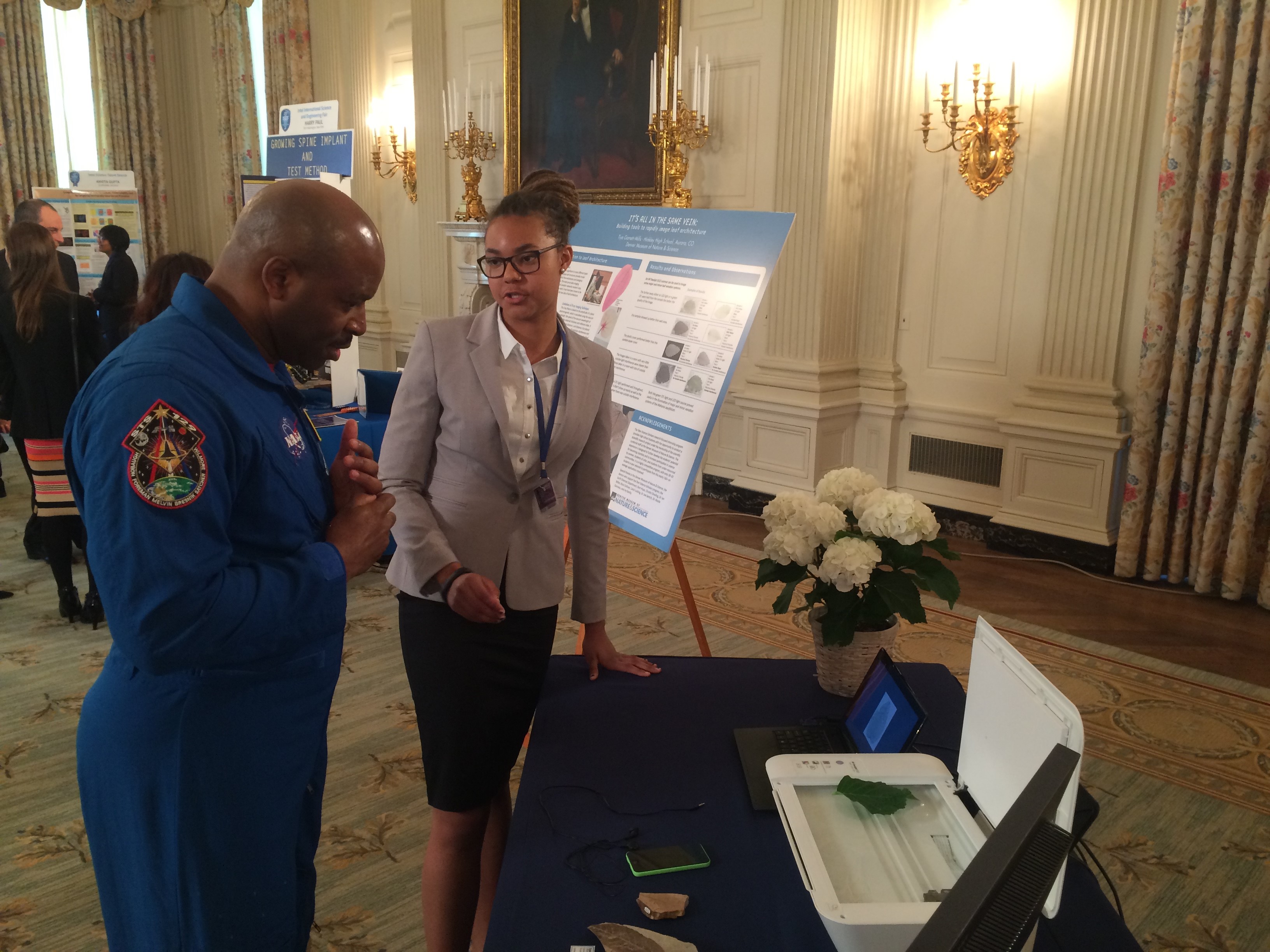 In addition to highlighting great students like Tiye, the 5th White House Science Fair, the gave the Obama Administration and a broader community of companies, non-profits, and others an opportunity to announce new steps to increase the ability of students and members of the public to participate in the scientific process through citizen science.  One of these commitments came from the White House itself, showing that anyone, anywhere can participate in citizen science!

This week, in collaboration with the National Oceanic and Atmospheric Administration (NOAA) and the National Park Service (NPS), the White House installed a rain gauge in the First Lady’s Kitchen Garden.  Measurements from this gauge are shared as part of the Community Collaborative Rain, Hail and Snow (CoCoRaHS) Network, which includes over 20,000 active participants and serves as the largest source of daily precipitation data in the United States.

Building off this momentum, OSTP will convene a Citizen Science Forum before the end of 2015 with Federal agencies and external organizations to co-develop a vision for cross-sector scaling of citizen science and crowdsourcing.

Lea Shanley is a Presidential Innovation Fellow at the National Aeronautics and Space Administration (NASA).