Third Estimate of GDP for the Fourth Quarter of 2014

March 27, 2015 at 9:30 AM ET by Jason Furman
Twitter Facebook Email
Summary:
This GDP report is consistent with a wide range of indicators showing continued labor market strengthening and improvement in household and corporate balance sheets.

Overall, today’s GDP report is consistent with a wide range of indicators showing continued labor market strengthening and improvement in household and corporate balance sheets. This estimate of fourth-quarter GDP affirms the robust underlying growth of the largest and most stable components of economic output, while the same volatile factors that increased growth in the third quarter subtracted from it in the fourth. Indeed, the sum of private consumption and fixed investment rose at the fastest pace in four years, despite the lower rate of overall growth. Personal consumption expenditures, which account for more than two thirds of output, grew 4.4 percent at an annual rate in the fourth quarter—the fastest single quarter since 2006. Despite the solid trend, the economy faces headwinds from weak growth abroad—as well as the lingering effects of winter weather—that economists generally expect to reduce GDP growth temporarily in the first quarter of 2015. There is more work to do to ensure that the recovery’s strong underlying trend is sustained and shared across a broad range of households. The President’s FY2016 Budget lays out a strategy to strengthen our middle class and help America's hard-working families get ahead.

1. Real gross domestic product (GDP) grew 2.2 percent at an annual rate in the fourth quarter of 2014, according to the third estimate from the Bureau of Economic Analysis. The report reflects especially fast growth in personal consumption expenditures (revised further upward in the final release) and continued strong increases in residential and business fixed investment. At the same time, the large third-quarter increases in Federal defense spending and net exports retreated somewhat in the fourth quarter. Despite the recent volatility of such transitory components—and though headwinds from abroad and winter weather may slow growth in the first quarter of 2015—the solid underlying trend of strong consumption and investment growth persists (see point 5). 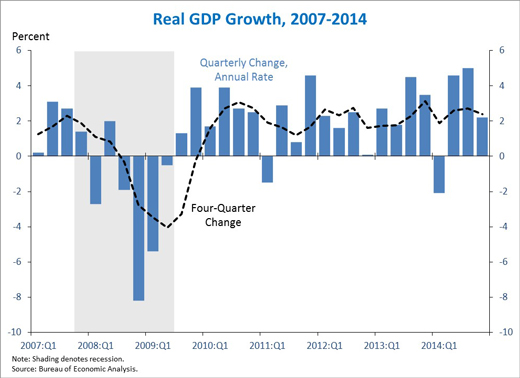 2. Fourth-quarter real GDP growth was unrevised from the second estimate released in February. The contribution of personal consumption expenditures, one of the most persistent and stable components of output, was revised up by 0.2 percentage point. Along with an upward revision to net exports, this fully offset a downward revision to inventory investment, one of the most volatile components. The upward revision to consumption was driven by higher health care utilization and higher nondurable goods spending than previously estimated. Government spending, which dragged on GDP growth in the fourth quarter, was unrevised in this final release. 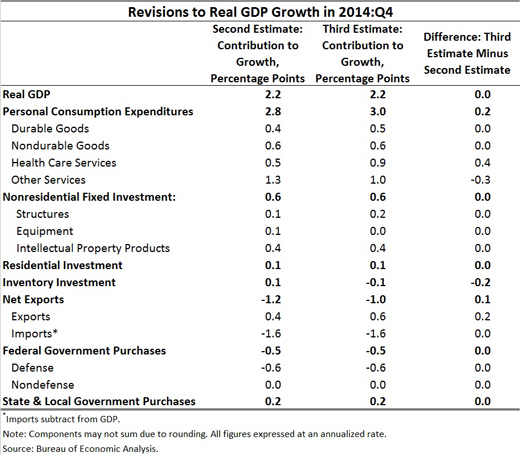 3. Real personal consumption expenditures, which constitute more than two thirds of GDP, grew 4.4 percent at an annual rate in the fourth quarter—the fastest single quarter since 2006. Consumption growth continues to trend upward as households have more than repaired the damage done to their balance sheets during the financial crisis. Consumers have made strides on both sides of the net worth equation, reducing their liabilities through a deleveraging process and seeing their assets appreciate. Indeed, household wealth in the fourth quarter was more than 22 percent above its pre-crisis peak, leaving families better positioned to consume and invest. Although household wealth is substantially higher on an aggregate basis, many have yet to participate fully in the recovery, and we have more work to do to boost incomes for middle-class Americans. 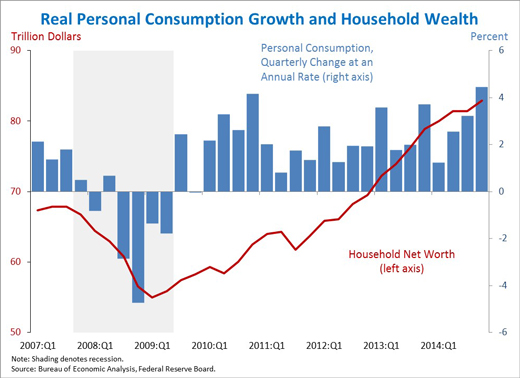 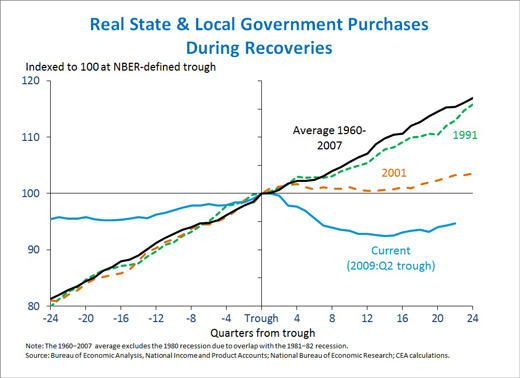 5. Real private domestic final purchases (PDFP) — the sum of consumption and fixed investment — rose 4.5 percent at an annual rate in the fourth quarter, its fastest quarterly growth rate since 2010. Although overall GDP growth slowed from the third quarter to the fourth, annualized PDFP growth increased by 0.4 percentage point. This fact is encouraging because real PDFP growth is generally a more stable and forward-looking indicator than real GDP, as it excludes volatile components like inventory investment, net exports, and government spending. Indeed, PDFP is a more accurate predictor of next-quarter GDP than GDP itself. The entire fourth-quarter deceleration in real GDP can be attributed to two of these volatile categories, net exports and government spending — two categories that boosted real GDP in the third quarter. As a result, the underlying trends driving the economy’s performance were quite similar in the third and fourth quarters. Over the past four quarters, PDFP has risen 3.3 percent, a faster pace than real GDP. 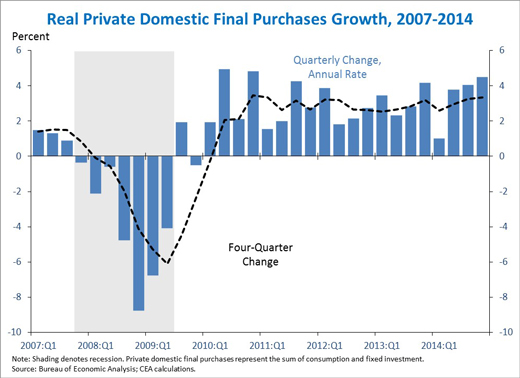