Taking Daughters and Sons to Work on STEM

May 6, 2015 at 10:32 AM ET by Jo Handelsman and Ellen Stofan
Twitter Facebook Email
Summary:
At the end of April, an estimated 3.5 million employers opened their doors to kids in their communities for “Take Our Daughters and Sons to Work Day.” This year, President Obama encouraged employers to expand their programs to youth who are typically unable to participate. The White House, OSTP, NASA, and other Federal agencies joined groups like Girl Scouts of the USA and the Microsoft Corporation in taking the President's message to heart, hosting activities at their workplaces designed to get youth interested in and excited about STEM careers.

The halls of workplaces across the country were a little rowdier than usual a couple of weeks ago, when an estimated 3.5 million employers participated in “Take Our Daughters and Sons to Work Day.” This year, President Obama encouraged employers to expand their programs to youth who are typically unable to participate – including foster youth, youth who may be at higher risk of dropping out of school, or youth who may not have a parent with a job that allows them to bring their children to work.

Employers from both the public and private sectors stepped up in response to the President’s call to action. Here at the White House, we marked our 10th year of participation in “Take Our Daughters and Sons to Work Day” by welcoming over 200 young attendees, aged 8-12, for a day of learning, including a variety of STEM-focused activity stations and an exciting Q&A session with the First Lady. The attendees included children of staff working throughout the Executive Office of the President (EOP), as well as kids from the Boys and Girls Club of Greater Washington and the D.C. Child and Family Services Agency who were each paired up with a White House senior staff member for a portion of the day. 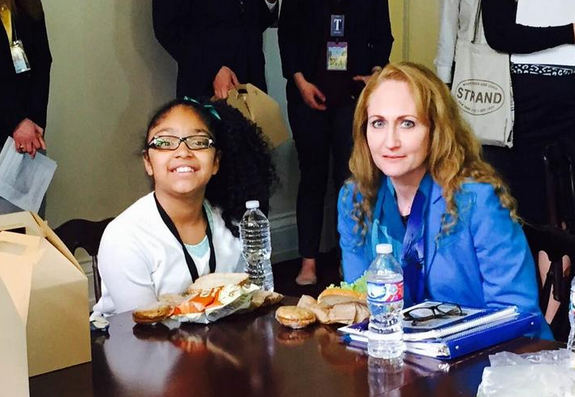 OSTP Associate Director for Science Jo Handelsman talks with mentee Kayla, age 9, about what it’s like being a scientist at the White House.

With this year’s program focused on “Empowering Young Minds at the White House,” including STEM education, the arts, and career exploration, science agencies like OSTP and NASA had a big role to play. In the morning, OSTP and NASA ran three of the six activity stations set up in the East Wing.

At the NASA station, students were invited by Astronaut Cady Coleman to think like an aeronautical engineer. They experimented with coffee filters and fluid-filled tubes to consider how engineers at NASA must design aircraft to meet their performance requirements. Students learned about the impact of mass, surface area, shape, and viscosity on objects as they travel through the atmosphere. Students were eager to share how their understandings might impact NASA’s design of airplanes, parachutes, and other aerospace craft. The children were especially excited to observe the President’s Marine One as it landed and took off during the program.

According to Rebecca Vieyra, Albert Einstein Distinguished Educator Fellow at NASA, "The activities were simple, but the students were often surprised at their observations. It is surprising to see that two balls of different masses hit the ground at same times, while coffee filters of same size and shape - but different mass – do not.” She adds, “As a teacher, my favorite moments are seeing students taking an activity that is so simple, and being utterly surprised by it. It's after these kinds of interactions that students challenge their own thinking." 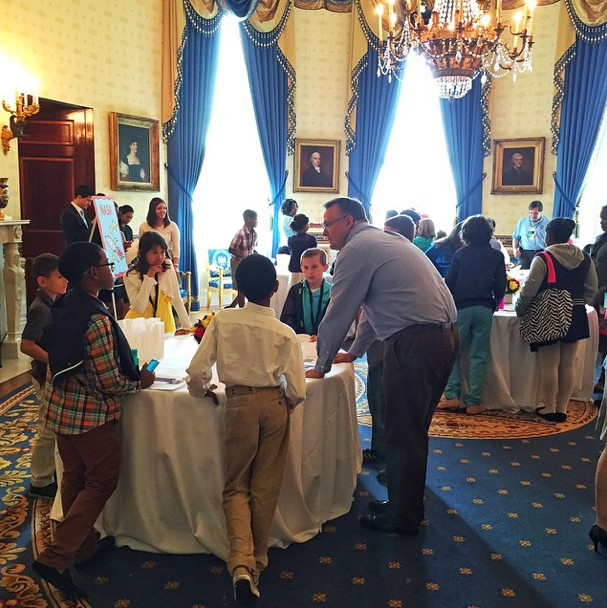 At the circuit station, kids worked with OSTP staff to create custom electronic cards. After getting a quick crash course on circuitry, the kids were able to use paper, copper stickers, a small battery, and a tiny LED light to build an interactive card that they could personalize. 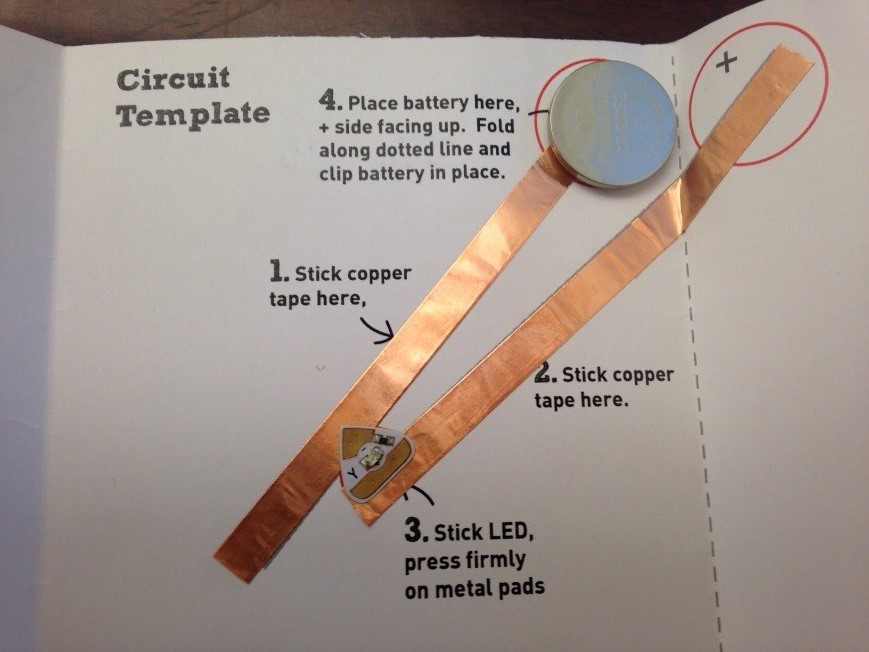 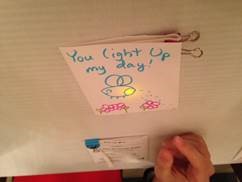 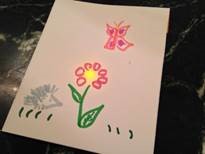 At the 3D-printing station, OSTP staff and David Naffis, a Presidential Innovation Fellow, showed kids how a digital design gets turned into a physical object through 3D printing. The students were inspired by recent real-life examples of 3D printing, such as the copper rocket engine part printed at NASA’s Marshall Space Flight Center in Huntsville, Alabama.  3D printing is one of many technologies NASA is embracing to help us continue our journey to Mars. The students also had the chance to see a working whistle printed from a roll of plastic filament, and to prove that the whistle worked by trying it out themselves. Though it faced some tough competition from the other activity stations (which included learning how to make origami frogs in honor of last week’s State visit from Japan, and taste-testing healthy cupcakes made by the White House Pastry Chefs), the 3D-printing station was voted by the young participants as one of the best of the day! 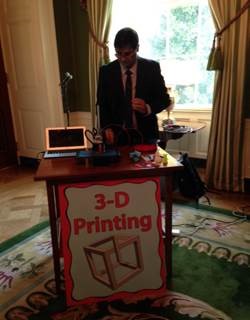 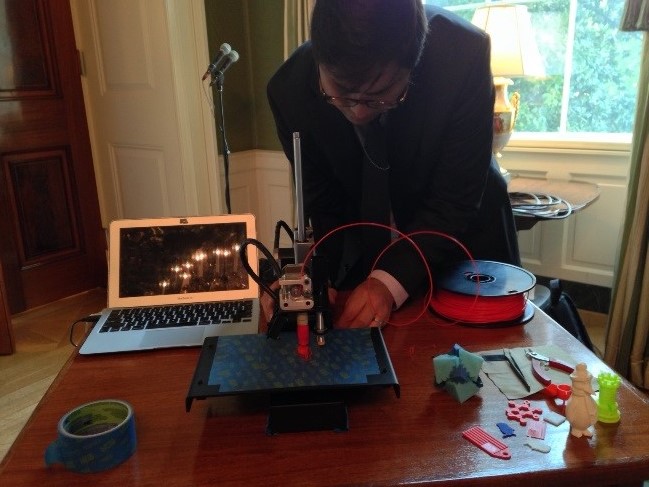 David Naffis, a Presidential Innovation Fellow at the National Archives, calibrates the 3D printer during Take Our Daughters and Sons to Work Day at the White House.

Outside the Executive Office, one of us (Dr. Ellen Stofan, NASA's Chief Scientist), dropped in on a "Girls and STEM" event hosted by the Girl Scouts of the USA and the Microsoft Corporation to participate in an interactive roundtable with Girl Souts ages 14 and up from three local council. The Girl Scouts also participated in an “Hour of Code,” which gave them hands-on experience in basic coding. 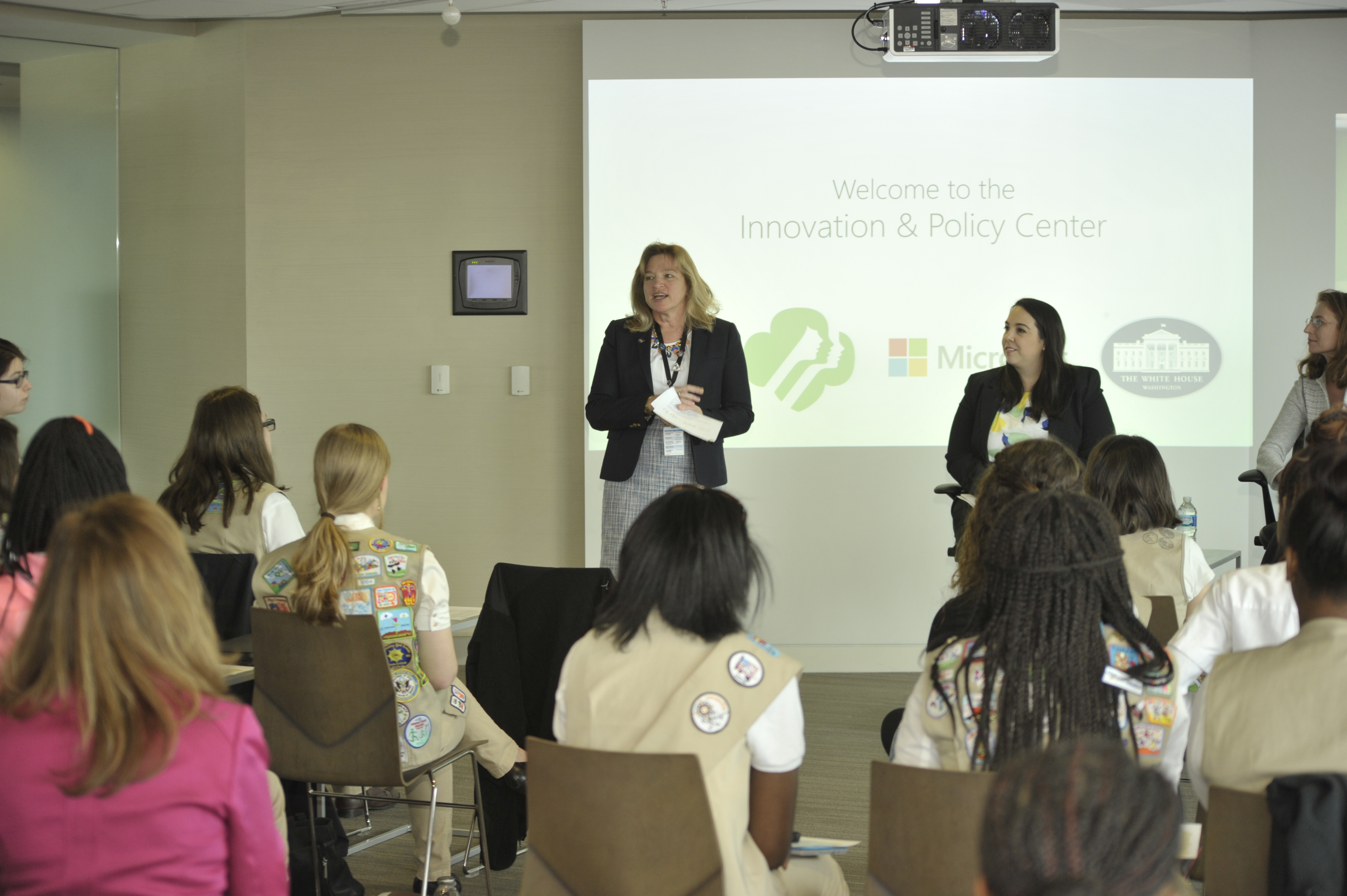 NASA Chief Scientist Ellen Stofan participates in a Women and STEM event hosted by the Girl Scouts of America and Microsoft’s Innovation and Policy Center in Washington, DC. (Photo credit: Mark A. Silva).

Getting kids of all backgrounds into the workplace, meeting with inspiring role models, and participating in hands-on activities helps empower young minds to enjoy and use science, technology, engineering, and math in their future careers…no matter what those careers may be. As the First Lady remarked at the White House event, “if you want to be President, if you want to be the First Lady of the United States, you have the ability if you work hard and get your education.” These tactile learning projects help empower young minds to enjoy and use science and technology in their future careers. We were excited to be able to welcome kids to our work at the White House last week, but we’re even more excited to see the amazing things they will accomplish in the future!

Jo Handelsman is Associate Director for Science at the White House Office of Science and Technology Policy.

Ellen Stofan is Chief Scientist at the National Aeronautics and Space Administration.