Third Estimate of GDP for the First Quarter of 2015

Real GDP for the first quarter was revised up this morning, reflecting slightly higher growth in personal consumption, private investment, and government expenditures than previously estimated. The small first-quarter decline in overall GDP was driven by a number of factors including harsh winter weather and tepid foreign demand. However, the combination of consumption and investment—the most stable and persistent components of output—continued to rise at a robust year-over-year pace. This solid trend matches the strong pace of job growth and employment reduction observed over the last year. The President is working to build on these underlying trends by opening our exports to new markets with high-standards free trade agreements, boosting investment in infrastructure, and avoiding harmful budget cuts like the sequester.

1. Real gross domestic product (GDP) edged down 0.2 percent at an annual rate in the first quarter of 2015, according to the third estimate from the Bureau of Economic Analysis. This report reflects an upward revision of 0.5 percentage point to overall GDP growth. The slower first quarter follows a solid increase of 3.6 percent at an annual rate during the second half of 2014. Over the past four quarters, GDP rose 2.9 percent. First-quarter growth was likely affected by a number of transitory factors including unusually severe weather, the West Coast ports dispute, and various measurement issues. A decline in net exports was another important contributor to weak GDP growth. Indeed, net exports subtracted nearly 2 full percentage points from quarterly GDP growth. Furthermore, structures investment subtracted about 0.6 percentage point from GDP (see point 4), reflecting reduced oil drilling in the wake of last year’s decline in oil prices. Despite the decrease in GDP, real gross domestic income—an alternate measure of economic output—increased 1.9 percent at an annual rate in the first quarter. 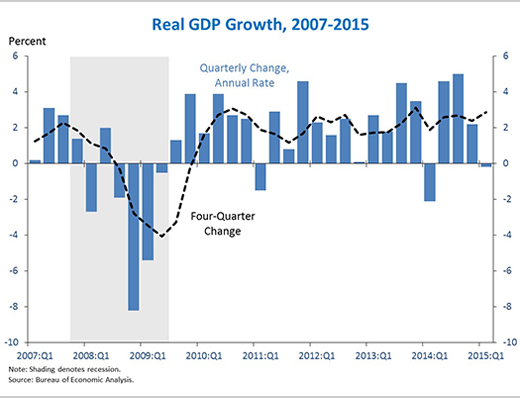 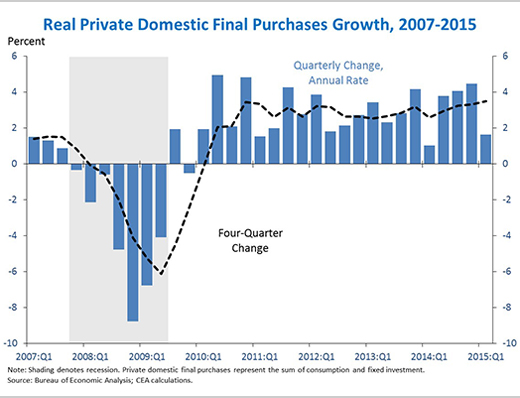 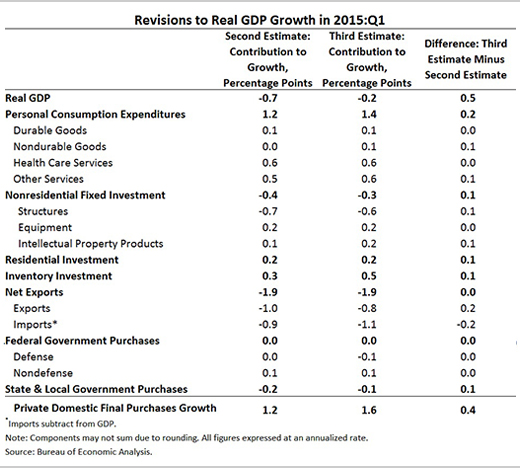 3. Government spending has decreased as a share of GDP in recent quarters, while private investment has risen to offset it. Over the past two years, government expenditures (consumption and investment) as a share of GDP declined 1.1 percentage points. The decline reflects reduced government spending in both the Federal and the State and local sectors. State and local spending has begun to expand after contracting in the early part of the recovery, but continues to decline as a share of output. Personal consumption and net exports have composed a largely stable share of total output over this period, while private investment has risen to offset the government decline. Private investment includes the contributions of the business sector and the household sector. Although business investment growth has trended upward in recent years, the first quarter saw a sharp energy-driven decline (see point 4); meanwhile, residential investment growth has strengthened in recent quarters (see point 5). 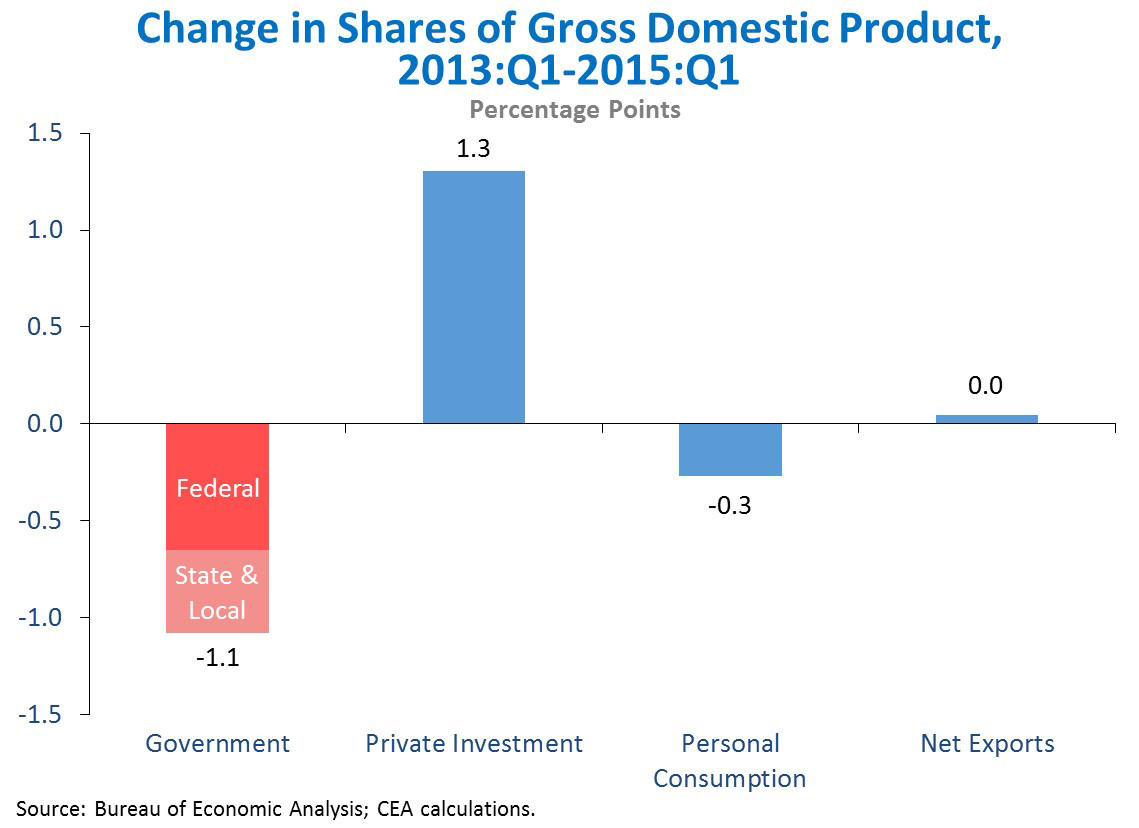 4. Most of the first-quarter slowdown in business investment is explained by reduced drilling and mining activity following last year’s large oil price decline. Business fixed investment declined 2.0 percent at an annual rate in the first quarter after growing 6.2 percent over the four quarters of 2014. More than half of that gap is explained by the 49 percent annualized first-quarter decline in mining exploration, shafts, and wells, which includes petroleum drilling. Despite the large impact on first-quarter growth, mining and drilling comprised only 7 percent of business fixed investment in 2014. Other structures investment beyond mining and drilling—which is also sensitive to energy prices, but less so—also declined, explaining roughly another tenth of the business investment slowdown. Equipment investment and intellectual property investment rose in the first quarter, but more slowly than their recent trend. These other categories explain about one quarter of the slowdown in business fixed investment. 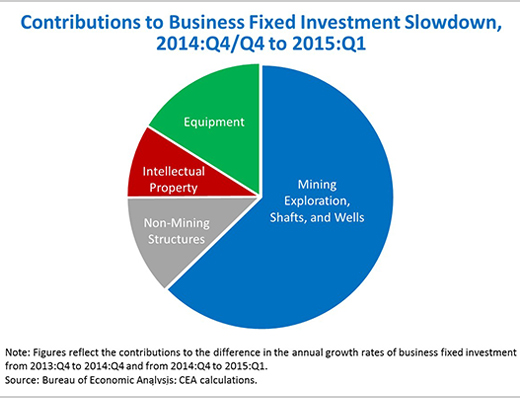 5. Residential investment growth has picked up over the past year, but it has not returned to the growth rates attained earlier in the recovery. Over the past four quarters, residential investment has grown 5.5 percent at an annual rate—the strongest year-over-year growth since 2013. However, growth remains well below the levels attained in 2012 and 2013. One encouraging sign for residential investment is household formation, which includes young adults moving out of parental homes. Household formation is just one driver of housing demand (other major elements include credit availability and deterioration of the existing stock), but it rose in the fourth quarter of 2014, providing scope for more residential construction and investment going forward. 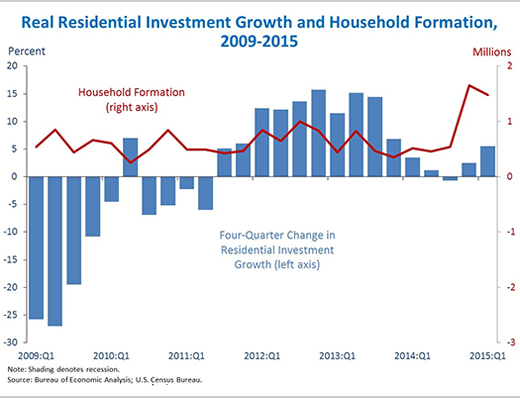