This afternoon, the Trustees of the Social Security and Medicare programs issued their annual reports on the programs’ financial status. Today’s Medicare Trustees Report reaffirms the dramatic improvement in the program’s financial outlook in recent years. Since 2009, the life of the Medicare Hospital Insurance Trust Fund has been extended by 13 years and its actuarial deficit reduced by more than four-fifths, thanks in substantial part to reforms in the Affordable Care Act (ACA). The law also improved Medicare’s prescription drug and preventive benefits coverage, increased its focus on quality, and gave the program unprecedented tools to fight fraud. On the eve of Medicare’s 50th anniversary, the Administration is committed to building on progress to date in moving Medicare toward payment models that reward efficient, high-quality care to ensure that the program can continue to protect the health and financial security of retirees and workers with disabilities for the next 50 years and beyond.

For Social Security, the new Trustees Report confirms that the program as a whole will be able to pay full benefits to retirees, survivors, and workers with disabilities for almost two decades. Today’s report does, however, highlight a long-foreseen imbalance between the two Social Security trust funds that pay disability and retirement benefits, respectively. Due to this imbalance, Congressional action will be needed soon to protect earned and expected benefits for 11 million Social Security disability beneficiaries. The Administration looks forward to working with Congress to rebalance the Social Security program—as has been done on a bipartisan basis many times in the past—to ensure that workers with disabilities and their families receive the full benefits they have earned and need.

The remainder of this blog post discusses the findings of each of today’s reports in greater detail.

This year’s Medicare Trustees Report estimates that the Medicare Hospital Insurance Trust Fund will remain solvent until 2030, the same year projected in last year’s report. Today’s estimate confirms the major progress that has been made in recent years in improving the financial position of the Medicare program. Since the 2009 report, the insolvency date for Medicare’s Trust Fund has been pushed back 13 years, an improvement due in large part to Medicare payment reforms enacted in the ACA.

The report also estimates that the Hospital Insurance Program’s 75-year actuarial imbalance, which measures the gap between the Trust Fund’s income and expenditures over the next 75 years, improved modestly since last year. The estimated imbalance this year is just 0.68 percent of taxable payroll, down from 0.87 percent in last year’s report and down by more than more than four-fifths since 2009.

In addition to the longer-term projections, the Trustees Report also provides our first look at final data on Medicare spending per beneficiary in 2014. The Trustees find that nominal Medicare spending per beneficiary rose just 2.3 percent in 2014, continuing the exceptionally slow growth rates of recent years. While the 2014 growth rate is a modest increase over the near-zero growth rates seen in 2012 and 2013, it is less than one-half the 5.5 average rate seen from 2000 to 2010 and below the growth rate of GDP per capita in 2014. With 2015 halfway over, the Trustees project that Medicare spending growth will remain slow this year and below longer-term historical averages over the coming decade. 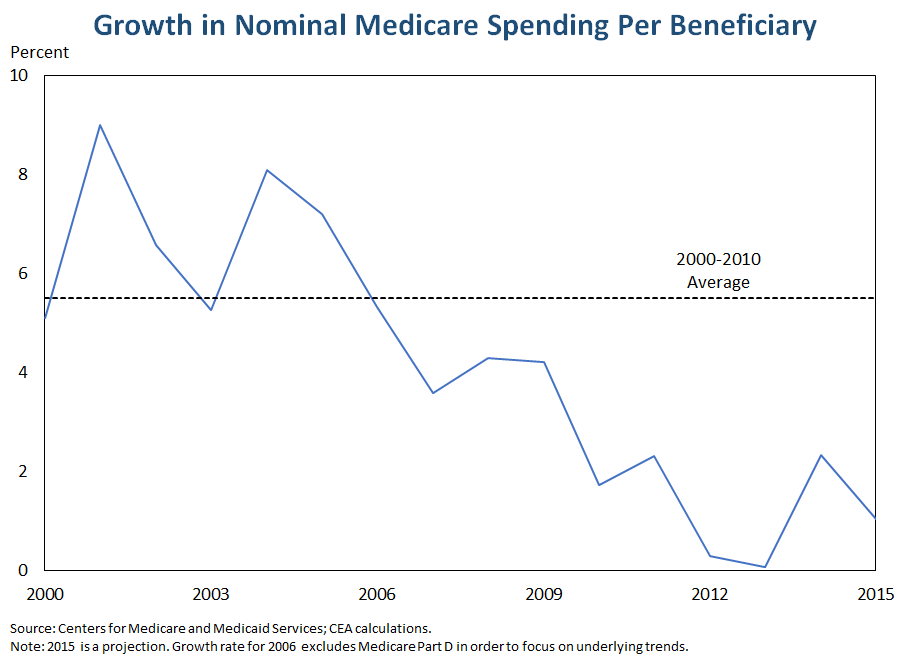 These new data add to the evidence that the exceptionally slow growth in per-enrollee health care costs we have seen in recent years continued through 2014 and into 2015. This spring, the Bureau of Labor Statistics reported that employers’ hourly health benefit costs rose just 2.5 percent over the 12 months ending in March 2015. The slow growth in health costs in recent years is already generating major benefits for our economy by boosting wages for workers and improving our fiscal future.

The recent progress in slowing the growth in health care costs, as well as striking improvements   health care quality, are thanks in part to reforms introduced in the ACA that reduced excessive Medicare payments to providers and private insurers and introduced innovative new payment models that reward efficient, high-quality care. To help ensure that this progress continues in the years ahead, the Administration has outlined an aggressive delivery system reform agenda that aims to deploy these innovative new payment models—like Accountable Care Organizations and bundled payments—throughout Medicare and the health care system as a whole, and we remain focused on that work.

As with the Medicare Trustees Report, today’s Social Security Trustees report confirms that the program will be able to meet beneficiaries’ needs for many years to come. Today’s report estimates that the overall Social Security Trust Fund will be able to pay scheduled benefits until 2034, a slight improvement from last year’s report. While the President is committed to ensuring that Social Security remains solvent and viable in the decades ahead, the updated projections make clear that the program as a whole faces no crisis.

However, as has been the case for many years, the Trustees also find an imbalance between the two Social Security trust funds that, respectively, pay benefits to retirees  and to workers with disabilities. As a result, they predict that the trust fund for the disability portion of the program will face a shortfall in 2016, as they have for the last several years. If Congress fails to act to address this long-foreseen imbalance in the program’s finances, 11 million Social Security disability beneficiaries could face a deep and abrupt 19 percent reduction in their disability insurance benefits in 2016. As explained in a recent White House report, the individuals who would be hurt have worked and paid into the system for many years—over two decades on average—before becoming unable to work due to a severe disability. These workers and their families rely on Social Security Disability Insurance to meet basic needs, with disability benefits comprising an average of about three-fifths of beneficiaries’ total family income.

To address the problem, the President has proposed a simple solution that policymakers have enacted on a bipartisan basis many times before: rebalance the Social Security program to ensure that workers with disabilities, retirees, and survivors receive the full amount of earned and expected benefits while policymakers develop longer-term policies to strengthen the Social Security program as a whole. The Administration looks forward to working with Congress to ensure that workers with disabilities and their families receive the full benefits they have earned and need.

The Social Security Trustees report also forecasts that there will be no Social Security cost-of-living adjustment (COLA) for 2016 since consumer prices have fallen from 2014 to 2015. As illustrated in the figure, this trend in consumer prices is the direct result of an important positive economic development of the last year: the sharp decline in energy prices that is putting more money in families’ pockets and supporting the ongoing economic recovery. 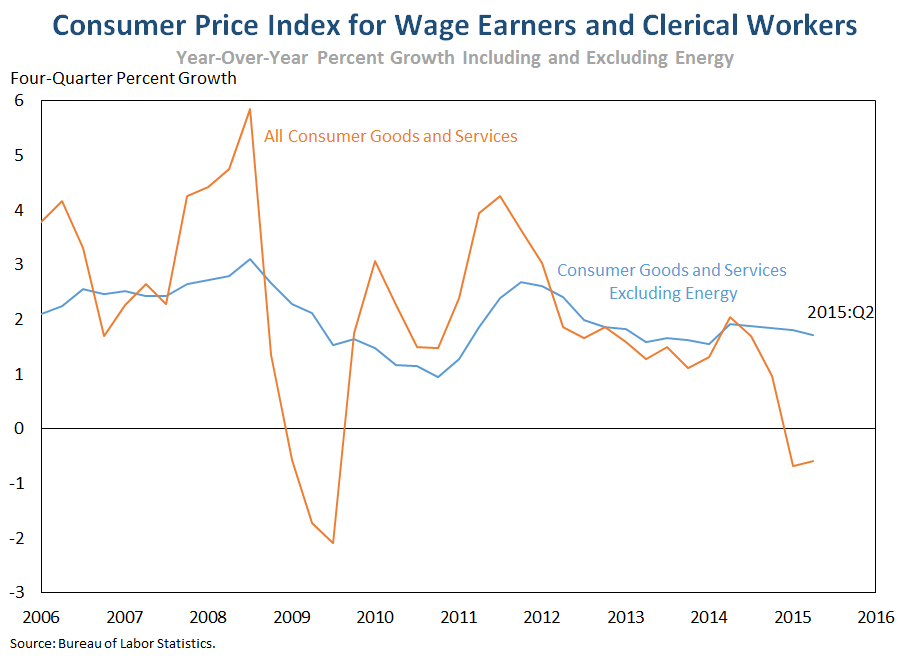 The Medicare Trustees project that the lack of a Social Security COLA, combined with a long-standing provision of the laws that govern Medicare, may generate an unusual and temporary change in the Medicare Part B premium in 2016. Without a Social Security COLA, Medicare’s “hold harmless” provision will ensure that approximately 70 percent of Medicare beneficiaries see no Part B premium increase in 2016, for the third year in a row. However, because Part B premium revenues are set to cover an established percentage of total program costs, the remaining roughly 30 percent of beneficiaries are forecast to see a much larger increase in Part B premiums than would otherwise be expected given the modest growth in Part B costs. Consistent with the discussion earlier in this blog post on overall trends in Medicare, growth in Part B costs was moderate in 2014 and is projected to remain low in historical terms in the future.

It is important to keep in mind that the Trustees’ projection of the 2016 Part B premium is just that: a projection. In 2010 and 2011, the last time the lack of a Social Security COLA triggered the “hold harmless” provision, the Centers for Medicare and Medicaid Services (CMS) moderated the premium increase for the subset of beneficiaries that were required to pay it. As CMS said earlier today, decisions about premium changes will be made in October and will depend on a variety of factors.

Jeff Zients is the Director of the National Economic Council. Jason Furman is the Chairman of the Council of Economic Advisers.