December 3, 2014 at 5:06 PM ET by Jason Furman, Matt Fiedler
Twitter Facebook Email
Summary:
New data out today from the Office of the Actuary at the Centers for Medicare and Medicaid Services confirmed that 2013 was another year of historically slow growth in health care spending and that 2011, 2012, and 2013 saw the slowest growth in real per capita health care spending on record.

New data out today from the Office of the Actuary at the Centers for Medicare and Medicaid Services confirmed that 2013 was another year of historically slow growth in health care spending and that 2011, 2012, and 2013 saw the slowest growth in real per capita health care spending on record. Today’s data make it increasingly clear that the recent slow growth in the cost of health care reflects more than just the 2007-2009 recession and its aftermath, but also structural changes in our health care system, including reforms made in the Affordable Care Act. As we have noted previously, if even a portion of the recent slowdown continues, the benefits for Federal and State budgets, families’ budgets, and the economy as a whole will be dramatic.

The remainder of this blog post takes a closer look at today’s report and what it can tell us about the drivers of recent trends. We also take a look ahead at 2014 using other data that are already available. Available data suggest that aggregate spending may be growing more quickly as millions of people gain health insurance coverage and access needed care. But the available data also show that health care prices, premiums, and per-enrollee costs—the factors that determine the costs families face—have continued to grow very slowly during 2014. 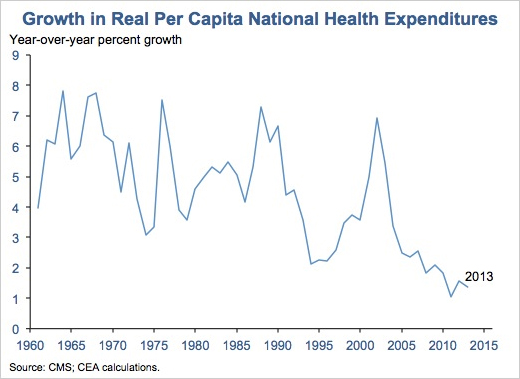 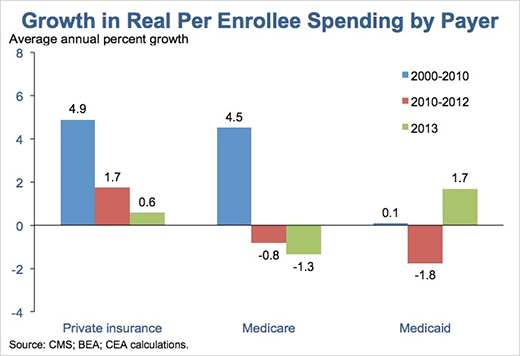 Trends in Per Capita Spending Across Major Health Care Categories

Slow growth in health care spending also continued for the three largest categories of health care goods and services: hospital care, physician and clinical services, and prescription drugs.  Growth in hospital and physician spending actually ticked down in 2013 relative to the average over the prior two years.  Prescription drug spending growth picked up modestly, but remained very low in historical terms. 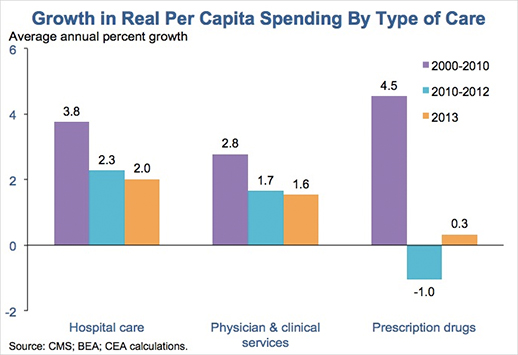 The deep recession almost certainly put downward pressure on private-sector health care spending growth during the downturn itself and its immediate aftermath as workers lost employer coverage and tight budgets caused families and businesses cut back on spending.  But two features of today’s data add to the evidence that structural changes in the nation’s health care system are playing a major role in recent trends: 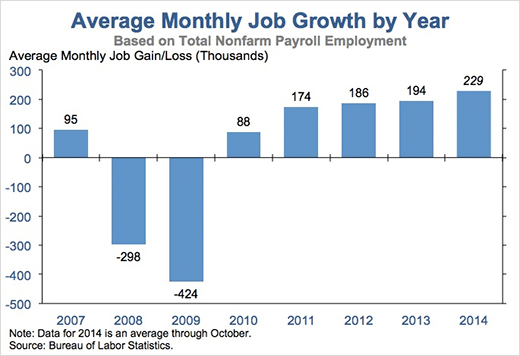 Research continues on what non-recession factors have influenced health care spending trends in recent years, and, in all likelihood, a variety of factors are playing a role.  In 2013, the implementation of sequestration reduced Medicare spending growth (although real Medicare spending per beneficiary would have been roughly flat even removing sequestration’s effect).  Similarly, slow growth in prescription drug spending appears to have resulted in part from a larger-than-normal number of drugs losing patent protection in recent years.

The Affordable Care Act has also made a meaningful contribution to recent trends by introducing payment reforms in Medicare and other public programs.  These reforms, described below, are generating significant savings in Medicare and, if recent research results are correct, catalyzing changes in the private sector that are generating additional savings:

For example, the law’s Hospital Readmissions Reduction Program, which gives hospital financial incentives to reduce the number of patients who must return to the hospital soon after discharge, has helped to sharply reduce Medicare’s hospital readmission rate, a decline that corresponds to 150,000 avoided readmissions in 2012 and 2013.

The law has also created more than 330 Accountable Care Organizations in 47 states, groups of medical providers who can share in the savings generated when they provide high-quality care, but do so more efficiently.  Results from the first outside evaluation of one of the Federal government’s Accountable Care Organization payment models found that the program generated promising results in its first year.

Economic research implies that these reforms are likely to generate savings beyond Medicare.  This research finds that changes in the level and structure of Medicare payments are frequently adopted, at least in part, by private insurers, generating savings throughout the health care system.  Because care insured by Medicare accounts for only about one-quarter of total health care spending, focusing solely on the direct effects of these reforms on Medicare spending could dramatically understate the effects on overall national health expenditures.

Slow Cost Growth Has Continued in 2014, Even as Coverage Expands

Today’s report from CMS does not include data for 2014, but a variety of other data provide glimpses of how health care costs have evolved during this year.  Those data show that health care cost growth has remained at very low levels in both the public and private sectors: 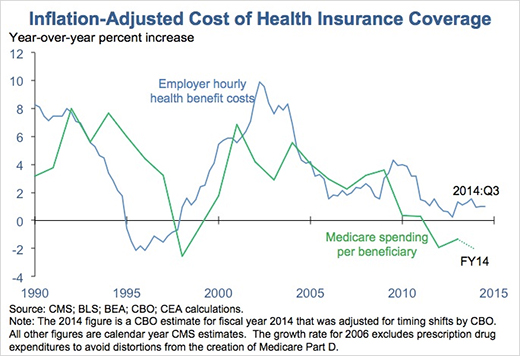 Even as slow growth in health care prices and per-enrollee spending continues, recent data have suggested that aggregate health care spending may be accelerating, likely reflecting increased utilization of health care by the millions of people who have gained health insurance coverage—or gained better coverage—under the Affordable Care Act during 2014.

Modestly faster growth in aggregate health spending due to expanding coverage is not a surprise, and it will last only until coverage stabilizes at its new, higher level. This utilization-driven increase in aggregate spending is also not cause for concern. Increased utilization of health care by the newly insured is, of course, a good thing; the best evidence shows that this additional health care improves mental and physical health. The fact that the previously uninsured are getting needed care also does not mean that individuals who previously had coverage are facing higher costs. Rather, their costs are determined by the underlying trends in health care prices and premiums, which are continuing to see exceptionally slow growth, as described above.