Second Estimate of GDP for the Second Quarter of 2015

August 27, 2015 at 9:30 AM ET by Jason Furman
Twitter Facebook Email
Summary:
The economy grew at a much faster pace in the second quarter than in the first, as consumers spent more and businesses invested more than previously estimated.

Real GDP growth in the second quarter was revised markedly upward, as consumers spent more and businesses invested more than previously estimated. The economy grew at a much faster pace in the second quarter than in the first, with strong personal consumption leading the rebound. At this time in the global economy, it is essential that we continue to do everything we can to maintain America’s domestic economic momentum—including avoiding a return to fiscal brinksmanship or unnecessary austerity by passing an on-time budget that reverses the sequester, increasing investments in infrastructure as part of a long-term transportation reauthorization, and other steps to foster long-term growth.

1. Real Gross Domestic Product (GDP) rose 3.7 percent at an annual rate in the second quarter according to the BEA’s latest estimate, well above the first quarter’s 0.6 percent pace and the BEA’s initial second-quarter estimate of 2.3 percent growth. In the second quarter, the increase in GDP growth was led by a faster pace of personal consumption growth than in the first quarter and a shift from negative to positive net export growth. Structures investment, which declined sharply in the first quarter and was previously thought to have declined in the second, is now estimated to have grown. Overall, real GDP has now risen 2.7 percent over the past four quarters. Real Gross Domestic Output (GDO)—an alternative gauge of economic output that is potentially more accurate (though not predictably stronger or weaker) over the long term, which BEA calls “the average of GDP and Gross Domestic Income (GDI)”—rose 2.1 percent in the second quarter and has risen 2.5 percent over the past four quarters, indicating a similar trend for growth as GDP albeit with a different quarterly pattern. 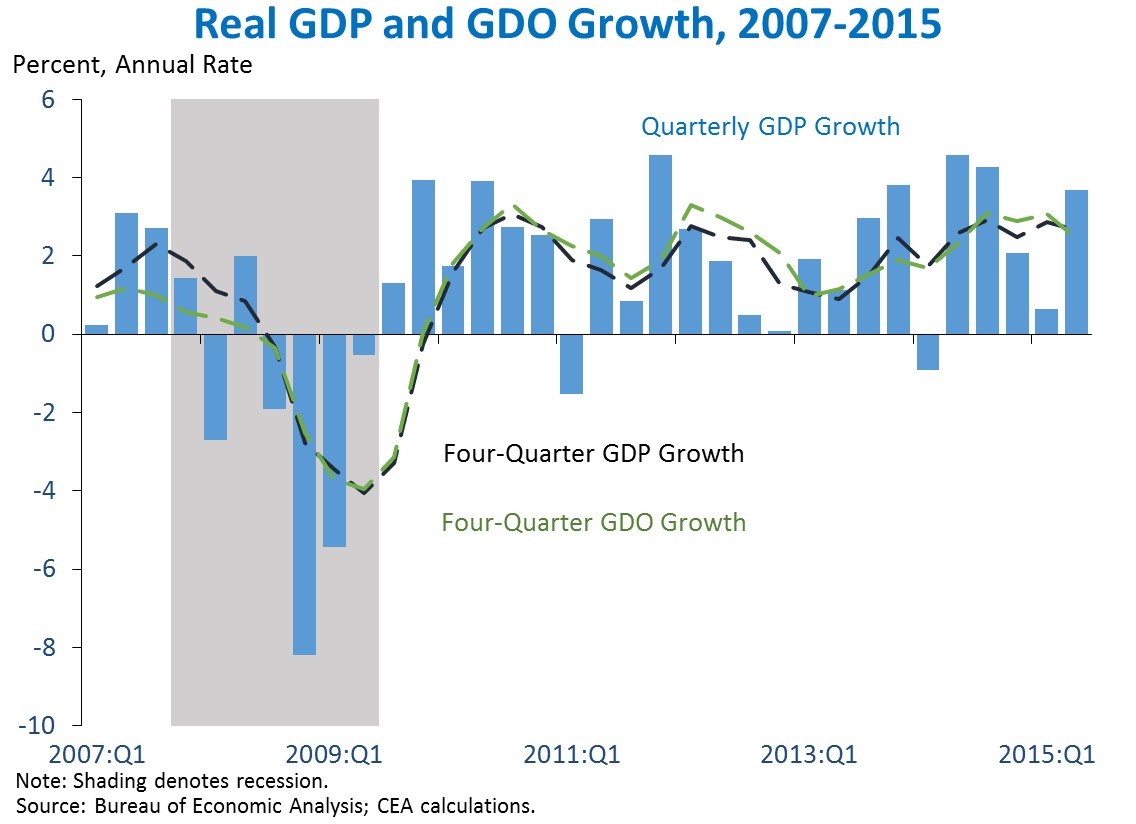 2. The 1.4 percentage point upward revision to real second-quarter GDP was spread across many components of economic output. Business fixed investment accounted for a little more than a third of the overall revision, as investment in structures, equipment, and intellectual property were all higher than previously estimated. Indeed, business investment—weighed down by reduced oil-related investment in the wake of oil price declines and previously thought to have fallen—is now estimated to have grown in the second quarter. State and local government purchases also accounted for 0.3 percentage point of the overall revision, as did inventory investment. Personal consumption, net exports, and federal government spending also each saw small positive upward revisions. Notably, this was an especially broad-based revision without any downward revisions in major components of GDP. 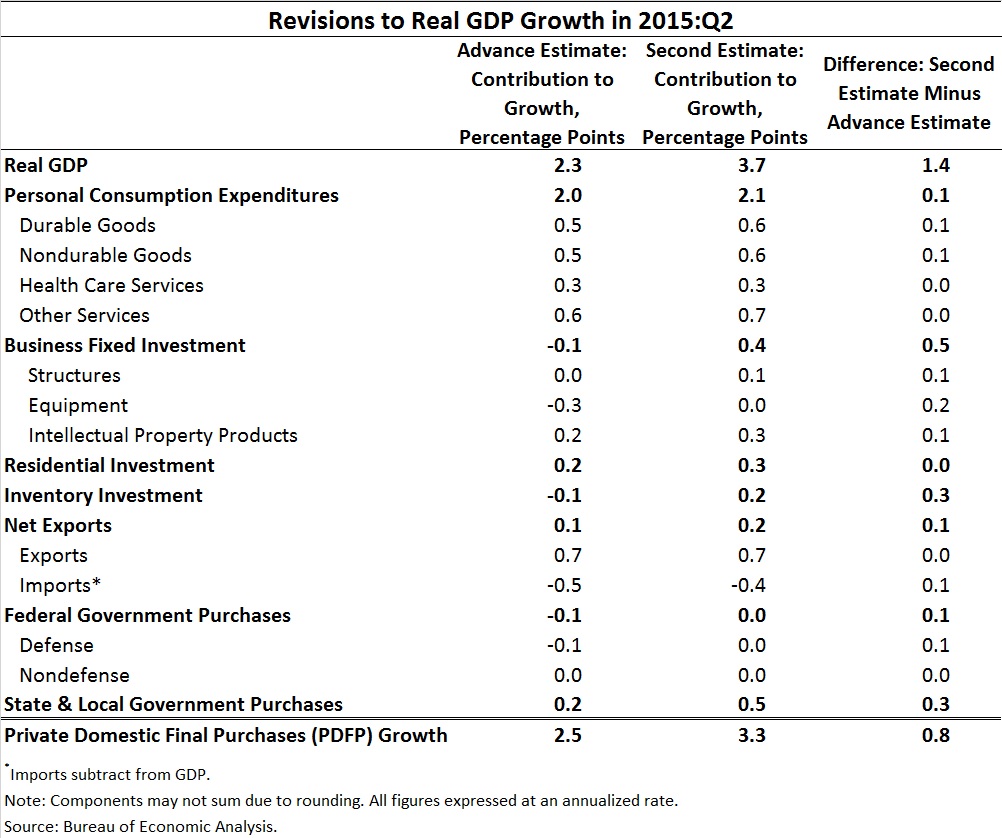 3. Initial estimates of Gross Domestic Output (GDO) growth over the long term tend to predict subsequent revisions to GDP growth. GDO is the Council of Economic Advisers’ term for the average of GDP and Gross Domestic Income (GDI)—two measures that should conceptually be identical but differ due to measurement error. While not systematically stronger or weaker than GDP over time, GDO can provide a more accurate picture of economic output, in part because independent errors to GDP and GDI tend partially to cancel out when the two are added. Relatedly, early GDO estimates appear to provide information about the extent to which GDP will eventually be revised. When GDO is estimated to grow faster than GDP, GDP tends to be revised up, and vice versa. The chart below shows the association between revisions to GDP growth incorporating all annual revisions to date (the “years later” measure) and the gap between initially estimated GDP and GDO. Of course—as with virtually all economic data when there are noisy statistics—it is important to focus on longer-term trends. Our analysis here is based on four-quarter growth rates of GDP and GDO, and we caution against focusing too much on the quarterly gap. 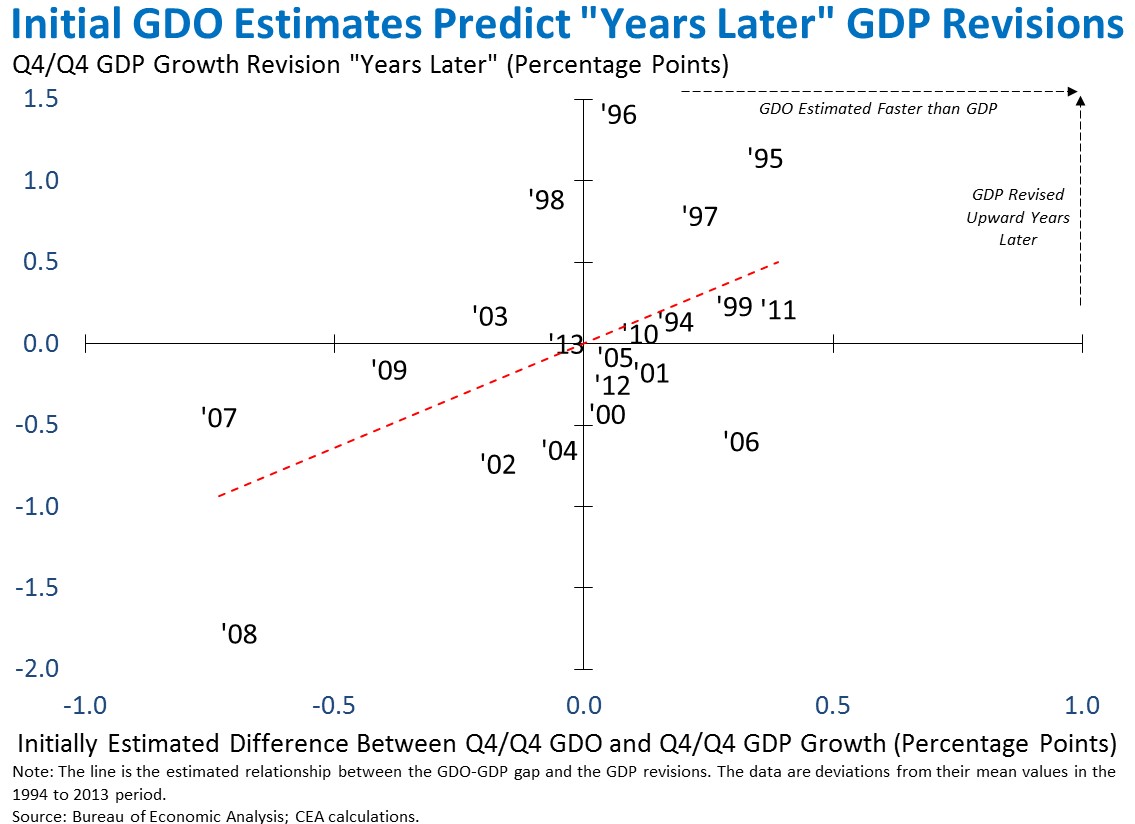 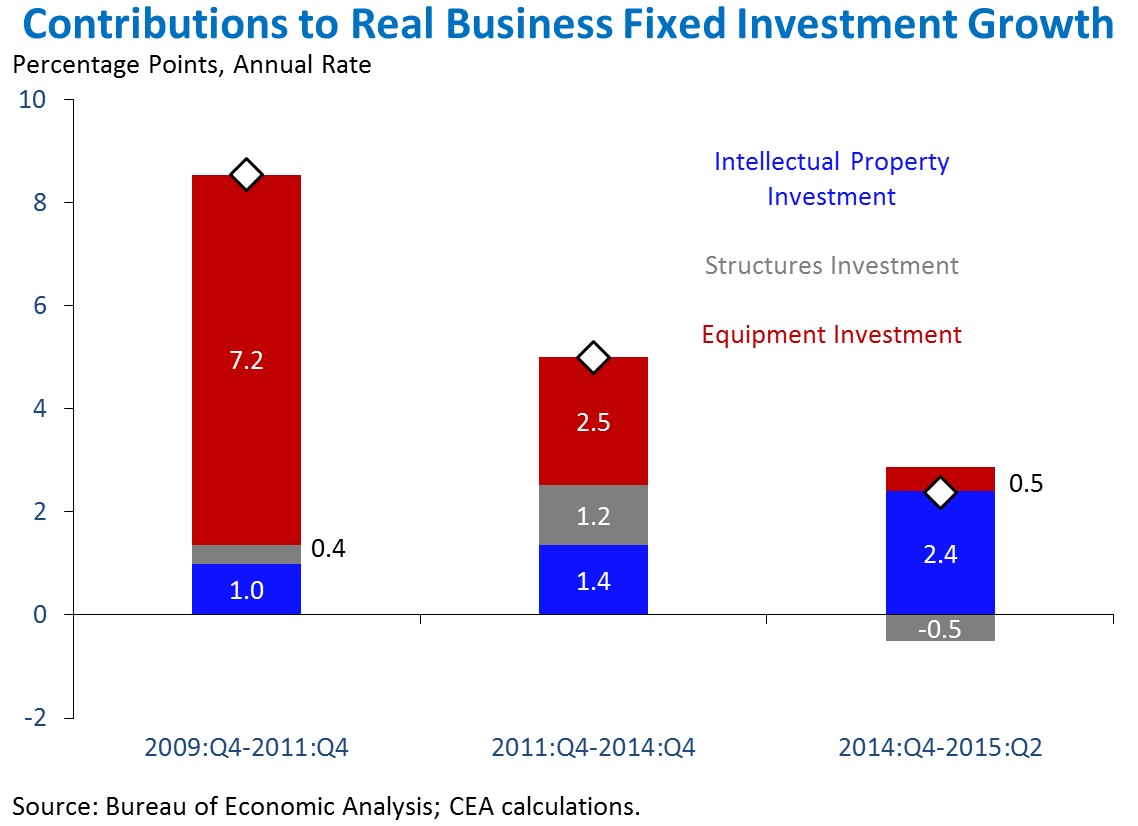 5. Real private domestic final purchases (PDFP)—the sum of consumption and fixed investment—rose 3.3 percent at an annual rate in the second quarter, and is growing at a faster year-over-year pace than overall GDP.  Real PDFP—which excludes the often noisy components like net exports, inventories, and government spending—is generally a more reliable indicator of next-quarter GDP growth than current GDP. While GDO aims to measure output growth more accurately in a given quarter by reducing measurement error, PDFP aims to measure signals of future economic growth by eliminating some of the noisy components in GDP. Over the past four quarters, PDFP grew by 3.4 percent, a faster rate than overall GDP growth. In analogy to the relationship between GDP and PDFP, the sum of wages and corporate profits is an especially important component of Gross Domestic Income (GDI), the income-side output measure that is combined with GDP to produce GDO. In fact, while PDFP tends to predict next-quarter GDP especially well, wages and profits tend to predict GDP over the next four quarters especially well—despite being more volatile than PDFP. Real wages and profits have grown 2.6 percent over the past four quarters, roughly in line with current trends in GDP and GDO. 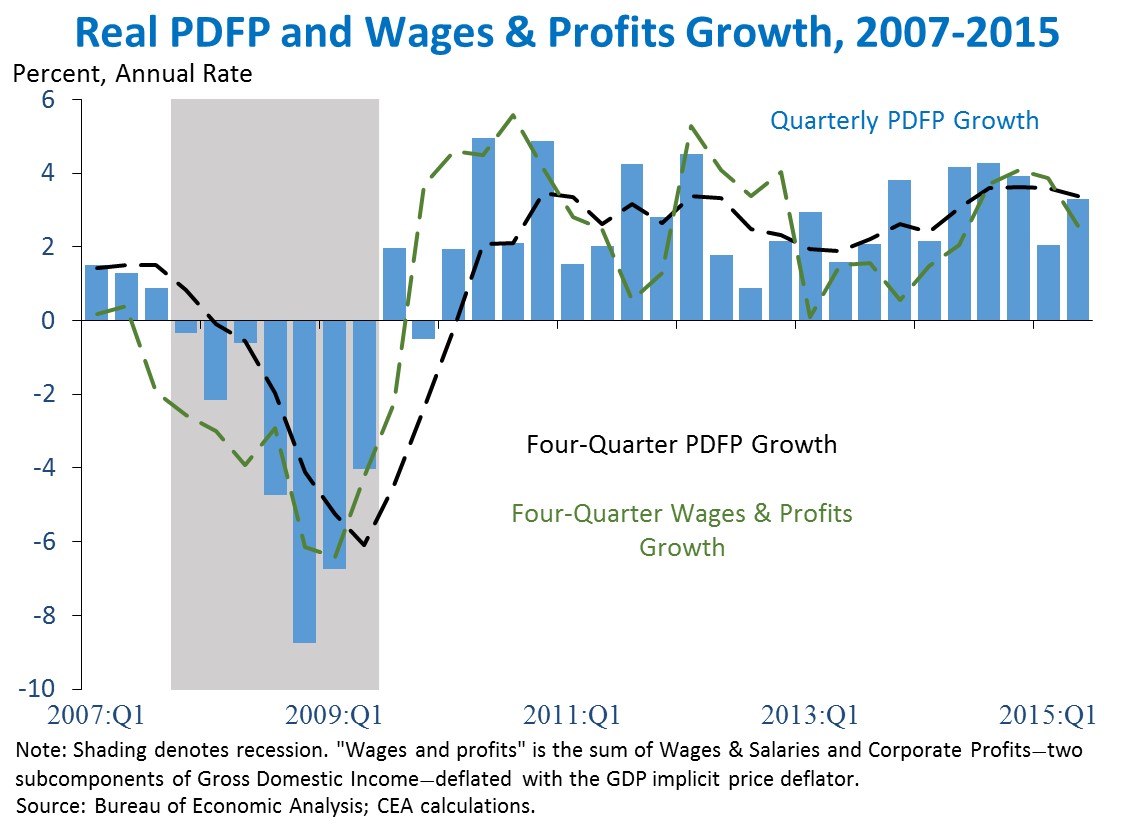