September 25, 2015 at 9:30 AM ET by Jason Furman
Twitter Facebook Email
Summary:
GDP growth in the second quarter was revised up for a second time, as consumers spent more and businesses invested more than previously estimated.

Real GDP growth in the second quarter was revised up for a second time, as consumers spent more and businesses invested more than previously estimated. This morning’s report confirms that the economy grew at a much faster pace in the second quarter than in the first, with strong personal consumption leading the rebound. Over the first half of 2015, domestic demand remained robust, even as slowing foreign demand and reduced oil-driven drilling investment dragged on growth. Because we face global headwinds, it is essential that we continue to do everything we can to maintain America’s domestic economic momentum—including avoiding a return to fiscal brinksmanship or unnecessary austerity by passing a budget that reverses the sequester and avoids another government shutdown, increasing investments in infrastructure as part of a long-term transportation reauthorization, and other steps to foster long-term growth.

1. Real Gross Domestic Product (GDP) rose 3.9 percent at an annual rate in the second quarter according to the BEA’s third estimate, well above the first quarter’s 0.6 percent pace. In the second quarter, the increase in GDP growth was led by a faster pace of personal consumption growth than in the first quarter. Structures investment, which declined in the first quarter amid low oil prices, was revised up and grew 6.2 percent at an annual rate. Overall, real GDP has now risen 2.7 percent over the past four quarters. Real Gross Domestic Output (GDO) — an alternative gauge of economic output that is potentially more accurate (though not typically stronger or weaker) over the long term, which BEA calls “the average of GDP and Gross Domestic Income (GDI)”— rose 2.3 percent in the second quarter and has risen 2.5 percent over the past four quarters, indicating a similar trend for growth as GDP albeit with a different quarterly pattern. 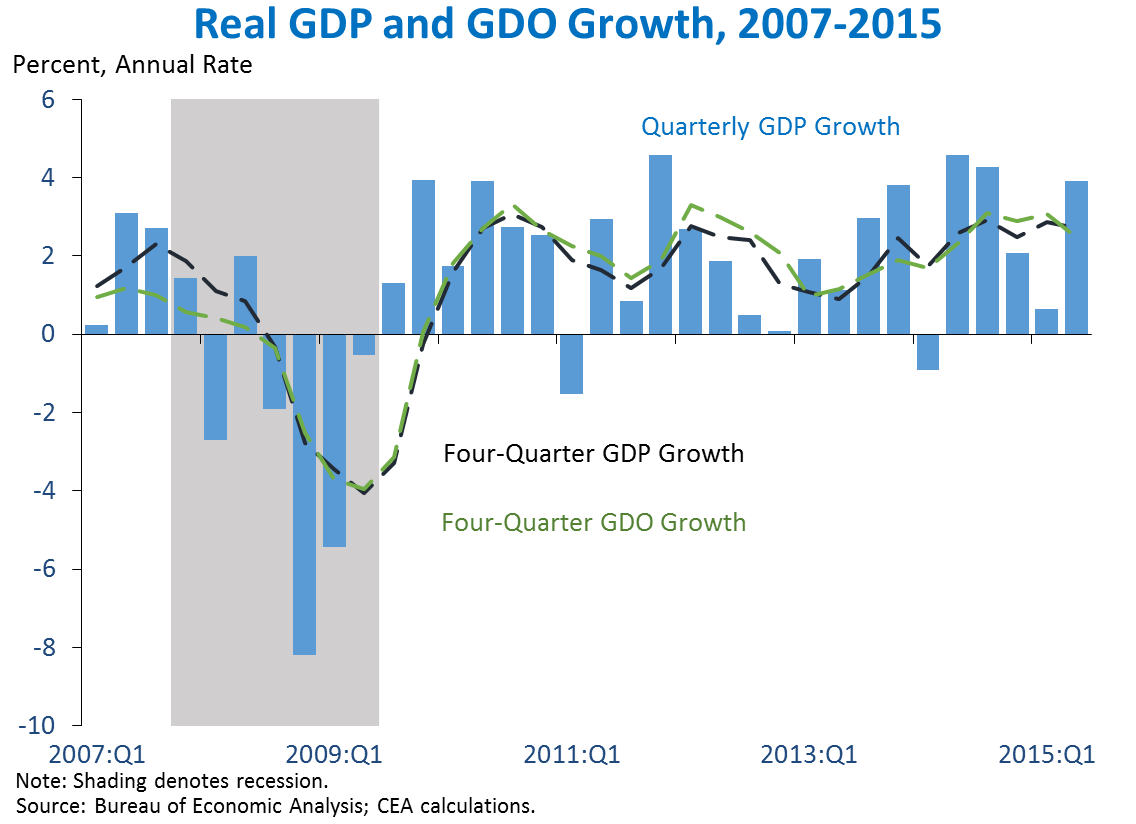 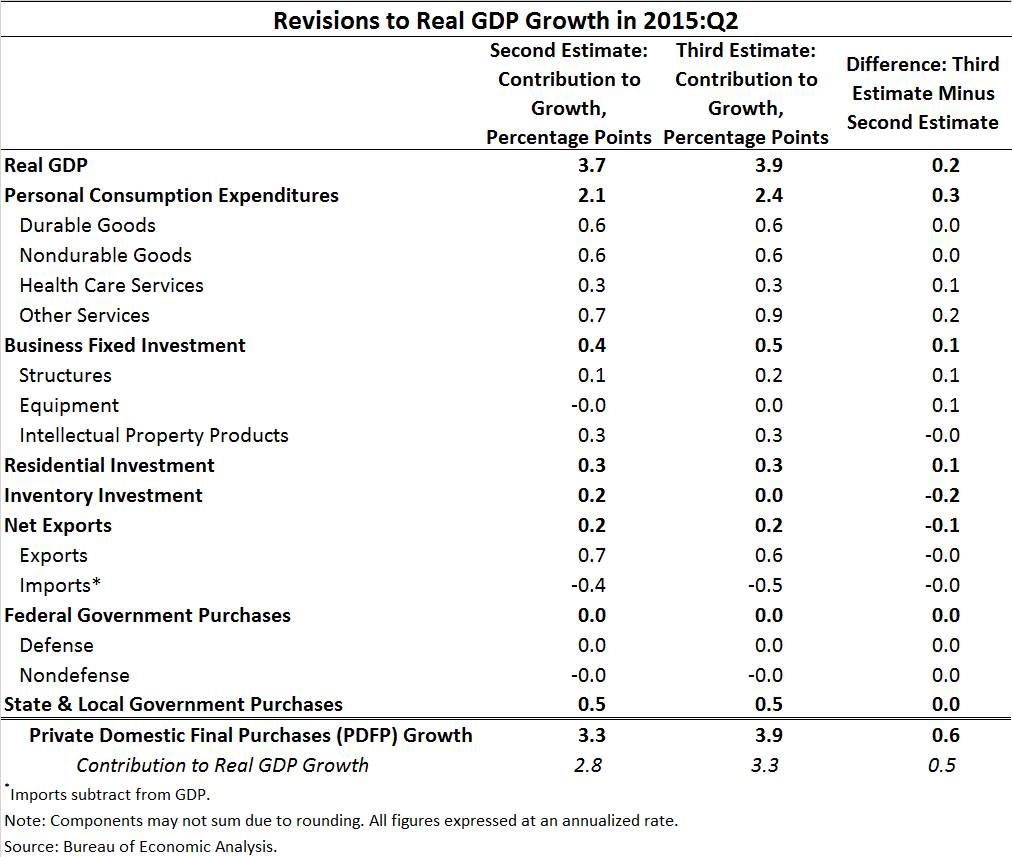 3. Real private domestic final purchases (PDFP)—the sum of consumption and fixed investment—rose 3.9 percent at an annual rate in the second quarter and is growing at a faster year-over-year pace than overall GDP. Real PDFP—which excludes noisy components like net exports, inventories, and government spending—is generally a more reliable indicator of next-quarter GDP growth than current GDP. PDFP aims to measure signals of future economic growth by eliminating some of the noisy components in GDP. Of course, to the extent that systematic patterns emerge in global growth, for example, the information contained in noisier components like net exports may be valuable—and they should not be ignored.

Because the GDP revision was concentrated in consumption and fixed investment, PDFP was revised up by 0.6 percentage point, considerably more than overall GDP. Over the past four quarters, PDFP grew by 3.5 percent, a faster rate than overall GDP growth. Similar to the relationship between GDP and PDFP, the sum of wages and corporate profits is an especially important component of Gross Domestic Income (GDI), the income-side output measure that is averaged with GDP to produce GDO. While PDFP tends to predict next-quarter GDP especially well, wages and profits tend to predict GDP over the next four quarters well—despite being more volatile than PDFP. Real wages and profits have grown 2.6 percent over the past four quarters, roughly in line with current trends in GDP and GDO. 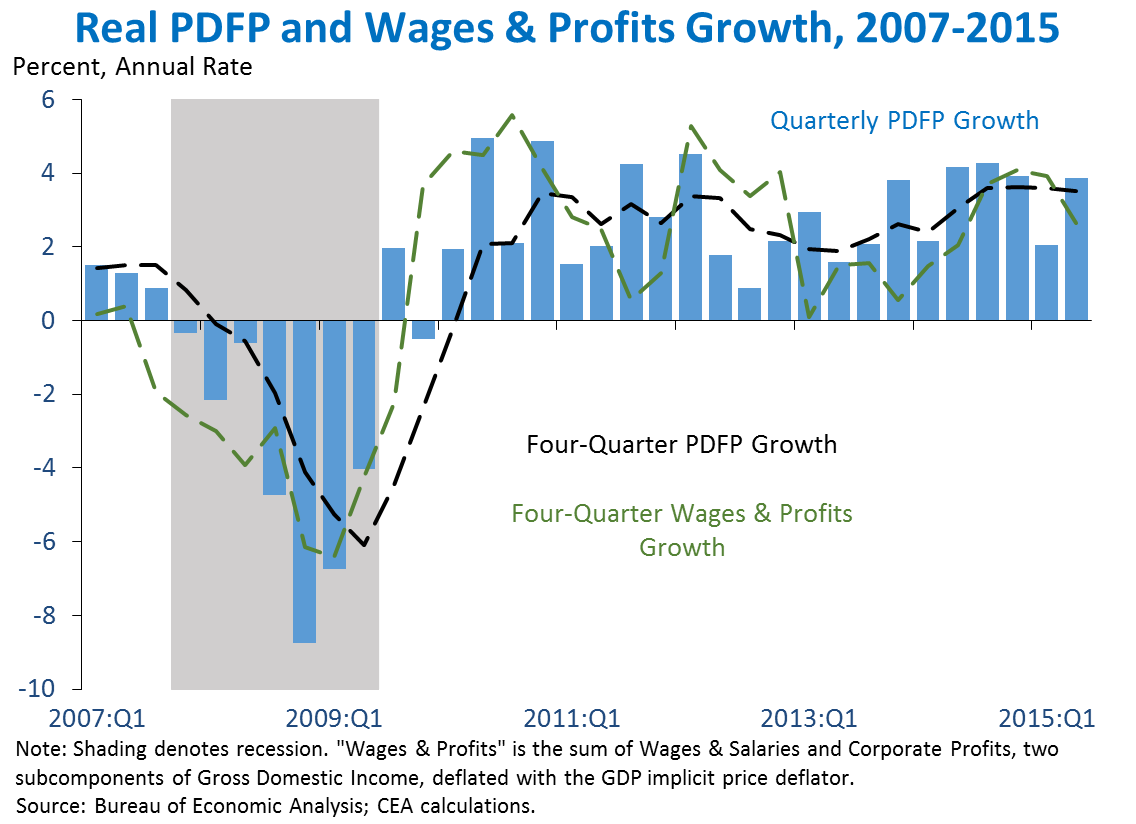 4. Gross domestic output (GDO)—the average of GDP and GDI—does a better job predicting next quarter’s GDP growth than GDP itself, but PDFP has even more predictive power. The table below shows the results from a series of regressions in which the last four quarters of output growth—according to various measures—are used to predict next quarter’s GDP growth. The analysis uses data from 1984 to 2014. The results show that the growth rate of GDO in each of the last four quarters is a better predictor of GDP than GDP itself—and just as good a predictor as GDI. In addition to the three measures of aggregate output, the table shows the predictive power of PDFP and wages and profits. PDFP has the most power of any of the measures to predict future economic growth. 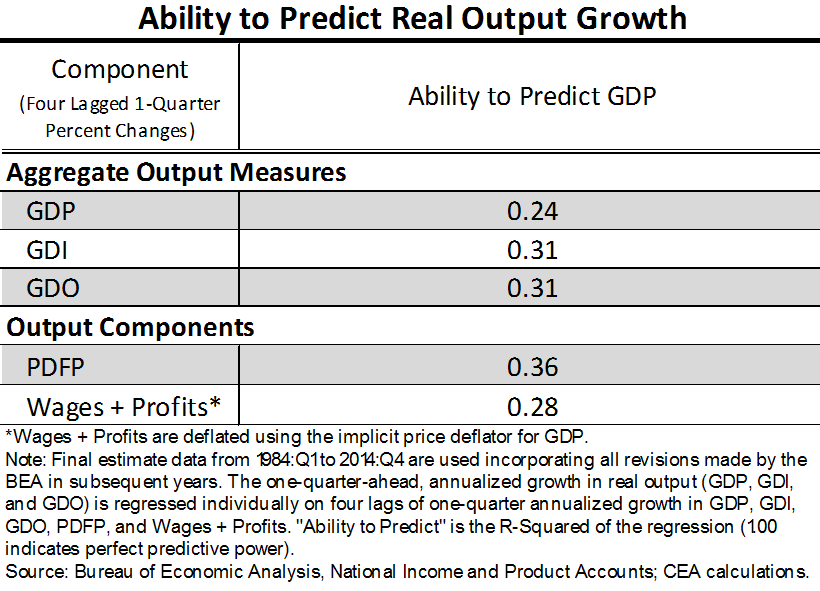 5. Over the first half of 2015, GDP grew at a slightly lower pace than in the prior two years, as exports and drilling investment grew below the earlier pace but non-drilling business investment grew faster. Two major headwinds weighed on GDP in the first half of the year: a slight decline in exports as we faced slowing demand from abroad and a sharp decline in drilling investment as producers faced lower oil prices. But core components of domestic demand remained resilient. Personal consumption contributed roughly the same amount to growth over the first half of 2015 as it did over 2013 and 2014. Business fixed investment—when excluding the contributions of drilling—has grown at a successively faster pace in each calendar year, led by rising investment in research and development and other intellectual property investment. 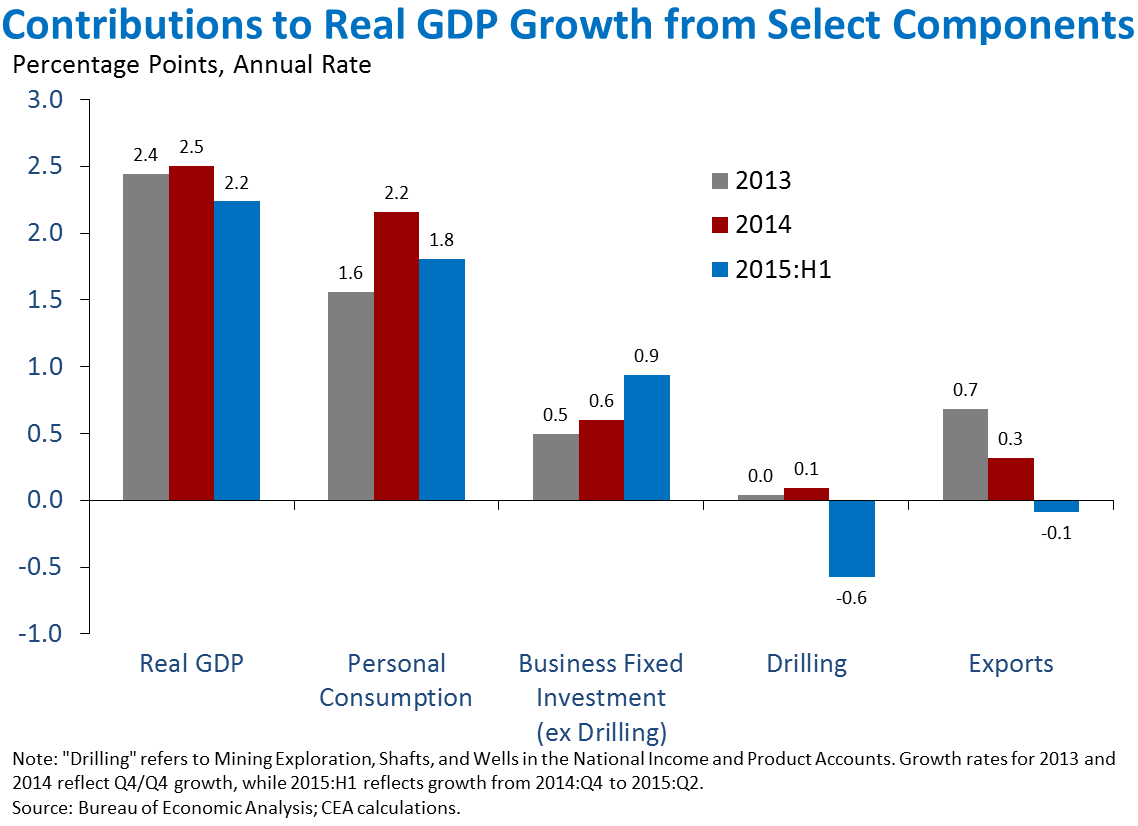