Third-quarter economic growth was revised upward as domestic demand continued to grow at a solid pace. Slowing foreign demand continues to weigh on overall growth, underscoring the importance of policies that promote strong and consistent domestic demand instead of unnecessary austerity and fiscal brinksmanship. That’s why Congress needs to finish its business this year: passing a complete budget that builds on last month’s bipartisan budget agreement, increasing investments in surface transportation infrastructure, and reauthorizing the Export-Import Bank.

1. Real Gross Domestic Product (GDP) rose 2.1 percent at an annual rate in the third quarter, according to BEA’s second estimate. In the third quarter, GDP grew at a faster pace than originally estimated, but at a slower pace than the 3.9 percent rate in the second quarter. Third-quarter GDP growth was boosted by consumer spending (which rose 3.0 percent), business fixed investment (which rose 2.4 percent) and residential investment (which rose 7.3 percent). However, inventory investment—one of the most volatile components of economic output—subtracted 0.6 percentage point from overall growth. Net exports continued to weigh on output, subtracting 0.2 percentage point amid slowing global demand. Export growth remains well below the pace observed earlier in the recovery. Overall, real GDP rose 2.2 percent over the past four quarters.

Real Gross Domestic Output (GDO)—the average of product-side and income-side measures of output—rose 2.6 percent in the third quarter, a faster pace than GDP alone. But in the second quarter—including upward revisions to wages and salaries—GDO is now estimated to have grown 3.0 percent at an annual rate, somewhat slower than GDP. CEA research suggests that GDO is potentially more accurate than GDP (though not typically stronger or weaker) over the long term. GDO is estimated to have grown 2.2 percent over the past four quarters, the same pace as GDP. 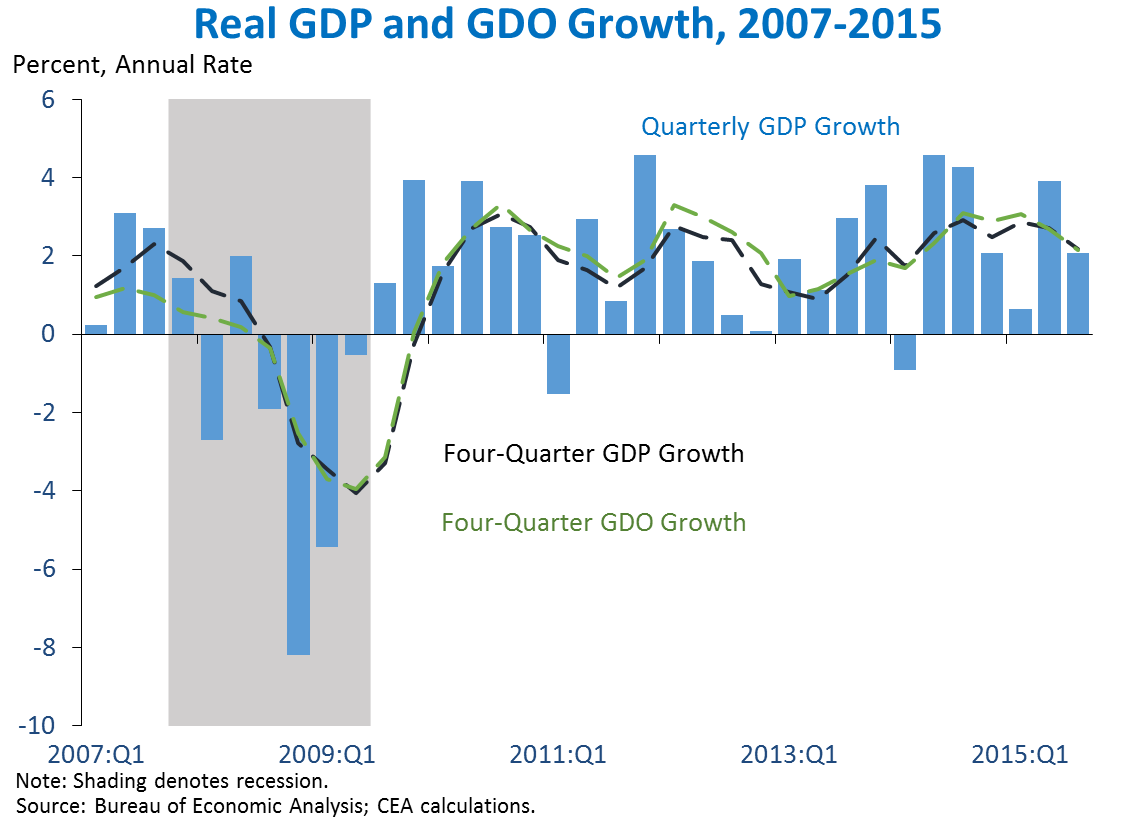 2. Third-quarter real GDP growth was revised up 0.6 percentage point at an annual rate. The upward revision was more than accounted for by a smaller decline in inventory investment than initially estimated, contributing 0.9 percentage point to the GDP growth revision. A modest downward revision to net exports partially offset that shift, reflecting both lower exports and higher imports than previously estimated. Services consumption growth was also revised down slightly. On balance, these revisions tend to move third-quarter growth more in line with longer-term trends, with net exports weighing on growth and inventories having a smaller impact. 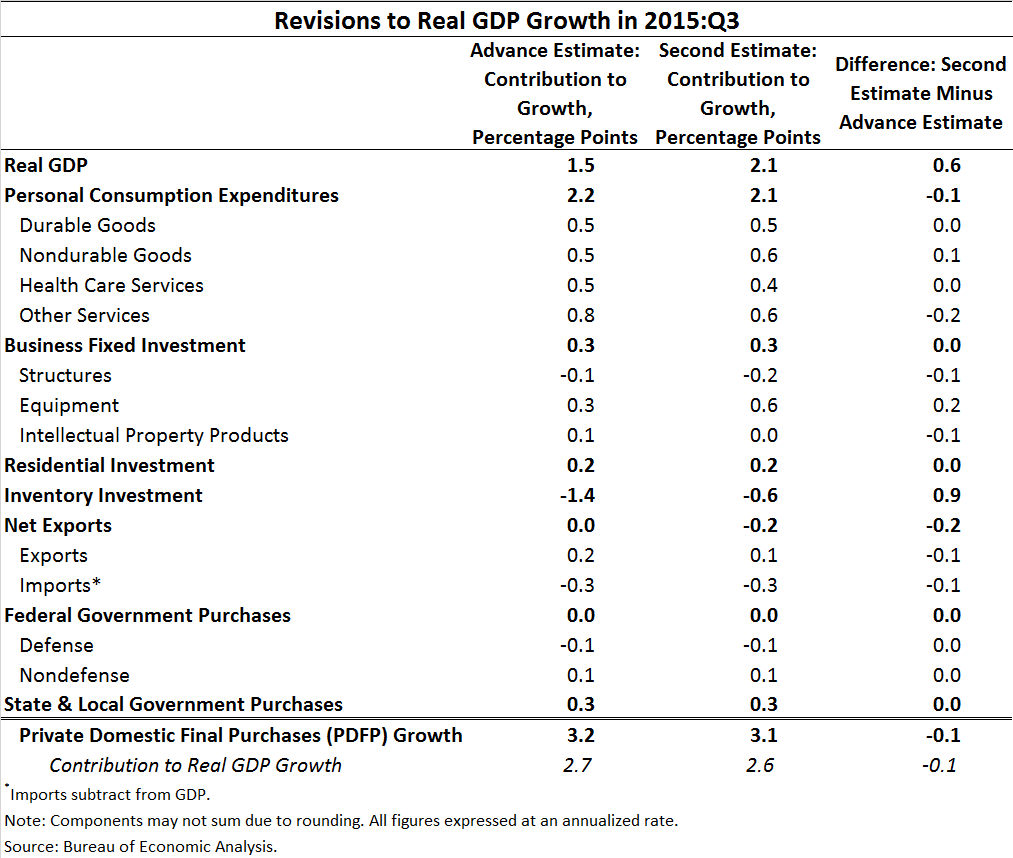 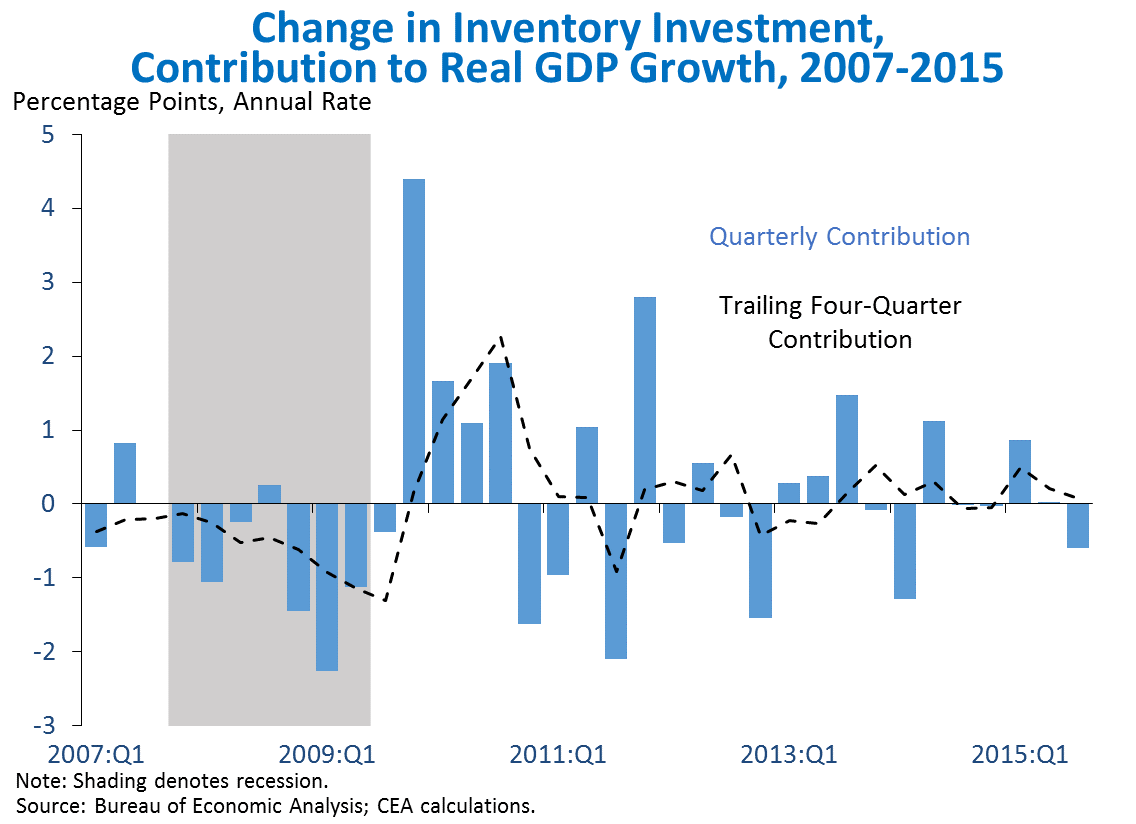 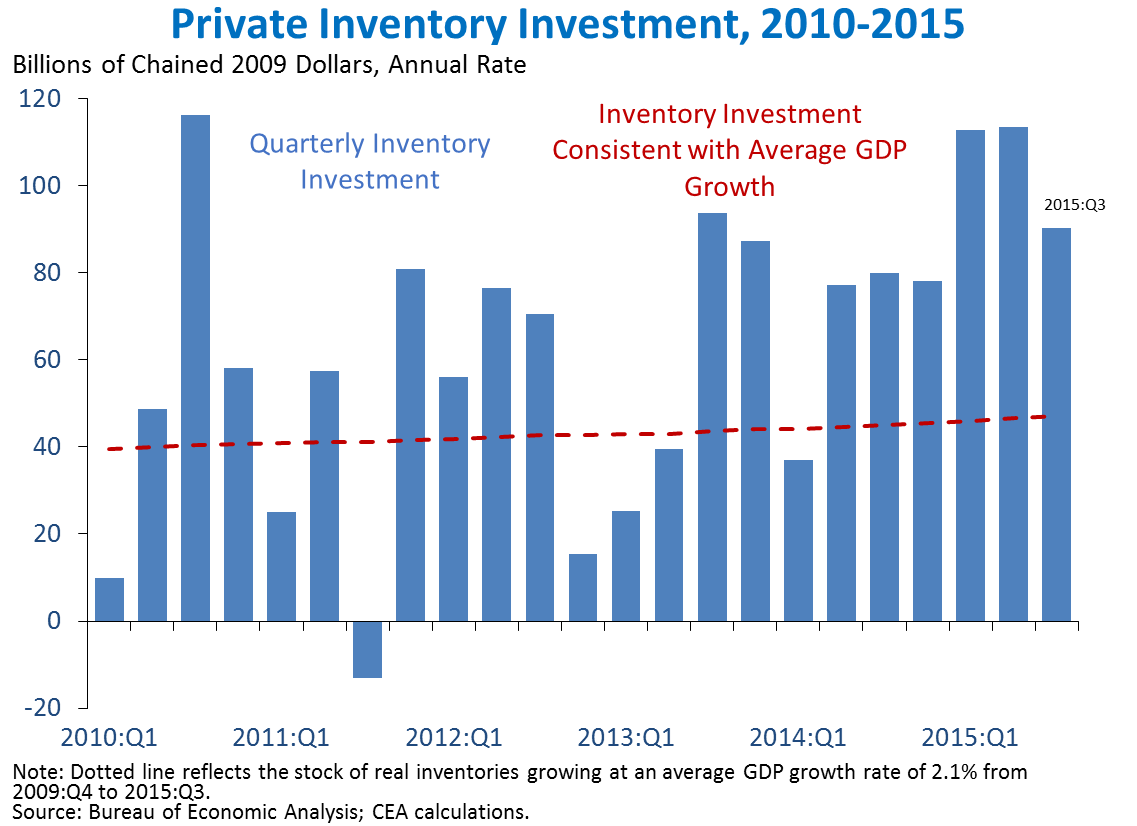 One important structural challenge facing the supply of housing is the rise in excessive or unnecessary land use regulations. While land use regulations sometimes serve reasonable and legitimate purposes, they can also give extra-normal returns to entrenched interests at the expense of others. I recently discussed these trends—and their links to both aggregate growth and rising inequality—at the Urban Institute. 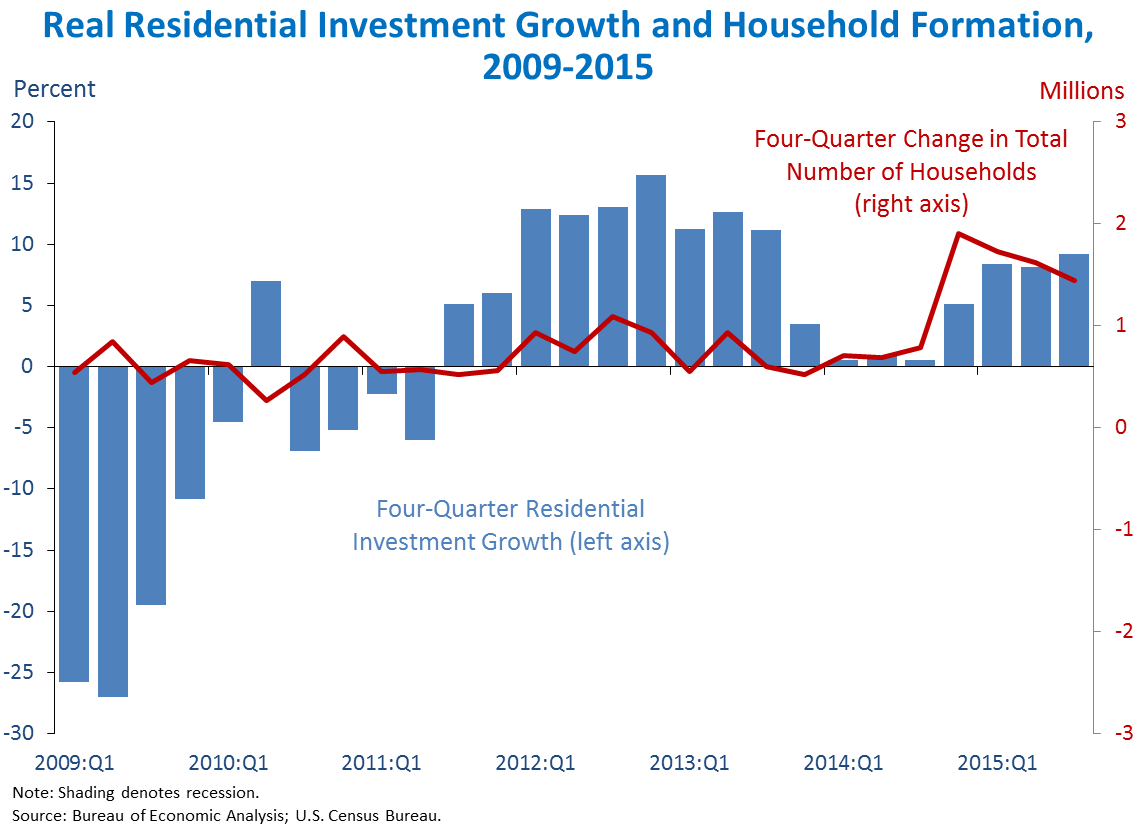 5. Real private domestic final purchases (PDFP)—the sum of consumption and fixed investment—rose 3.1 percent at an annual rate in the third quarter and is growing at a faster four-quarter pace than overall GDP. Real PDFP—which excludes noisier components like net exports, inventories, and government spending—is generally a more reliable indicator of next-quarter GDP growth than current GDP. To the extent that systematic patterns emerge in global growth, however, the information contained in exports may contain an important signal about the headwinds we face from abroad. Overall, PDFP rose 3.2 percent over the past four quarters, compared with 2.2 percent GDP growth over the same period. The especially large gap between PDFP growth and GDP growth is largely attributable to net exports, reflecting slowing growth abroad. 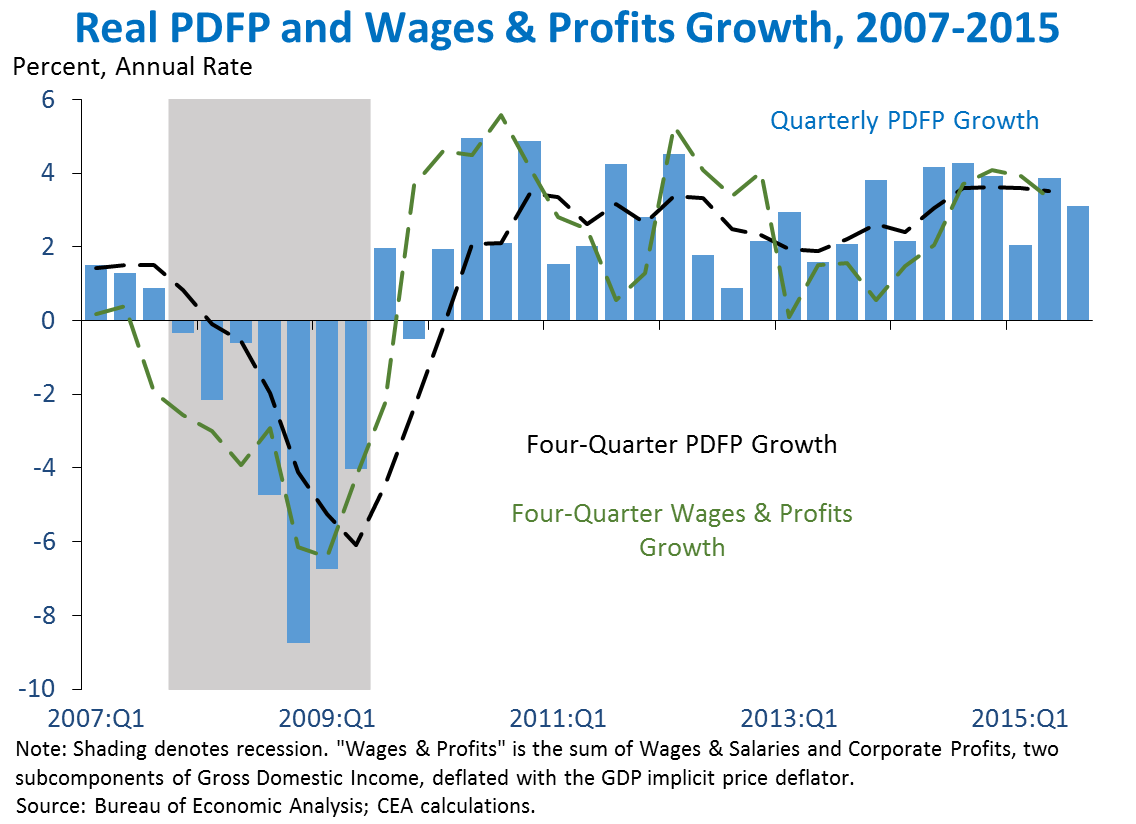