A Better America: Rejecting Bigotry and Reaffirming our Values

January 14, 2016 at 1:16 PM ET by Shekar Narasimhan
Twitter Facebook Email
Summary:
We must come together to reject bigotry, reaffirm our core values as Americans, and protect the rights that we fought so hard to achieve. 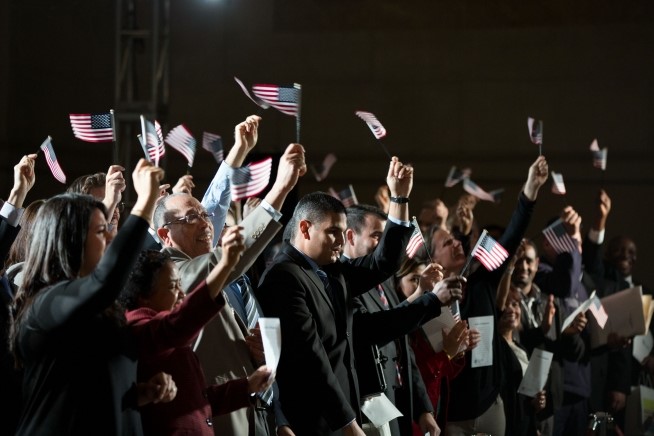 Newly naturalized citizens wave American flags after taking the Oath of Allegiance during a naturalization ceremony keynoted by the President at the National Archives in Washington, D.C., Dec. 15, 2015. (Official White House Photo by Pete Souza)

Earlier this week, during his final State of the Union address, President Obama reminded the nation that “when politicians insult Muslims, whether abroad or our fellow citizens, when a mosque is vandalized, or when a kid is called names, that doesn’t make us safer. That’s not telling it like it is. It’s just wrong. It diminishes us in the eyes of the world. It makes it harder to achieve our goals. It betrays who we are as a country.”

This week’s address echoed the President’s words from a powerful naturalization ceremony last month. He reminded us of the country that we have been historically—and the country that we want to be.  Immigrants and refugees are part of the foundation of our Nation, and they “revitalize and renew America.”  Immigrants and refugees come to the United States with hopes that their children will have lives that are better than the ones they left behind.  These Americans have contributed to this country in every area of society—they start businesses, teach our children, and provide medical services. Their drive and aspirations fuel the American dream: life, liberty, and the pursuit of happiness.

In today’s climate however, some immigrant and refugee communities, families, and children increasingly face discrimination, harassment, and attacks based on their race, ethnicity, color, national origin, or religion—to name a few. This is, unfortunately, not new.  In the aftermath of September 11, many Muslim, Sikh, Arab, and South Asian communities became the target of hate crimes, discrimination, harassment, and profiling. Places of worship were threatened and harassed, and congregants were attacked and in some situations, even killed.

"We need to reject any politics that targets people because of race or religion." —@POTUS: https://t.co/7ZgBUWI9cz #SOTU

A staggering number of students in middle schools, high schools, and universities have become the target of this senseless violence. In a 2014 report, the U.S. Commission on Civil Rights indicated that more than a decade after the terrorist acts of September 11, students who are or are perceived as Muslim, Sikh, Arab, Middle Eastern, South Asian, or Southeast Asian still confront bullying and harassment. In more recent months, advocates report that hate violence against these communities is on the rise and attacks ranging from harassment to bullying to homicide have been reported by the media.

These acts are intolerable, they violate the civil rights and liberties upon which our nation was founded, and we must come together to reject this bigotry, reaffirm our core values as Americans, and protect the rights that we fought so hard to achieve.

Just as the U.S. Department of Education recently called upon our school districts, colleges, and universities to foster safe, respectful, and nondiscriminatory learning environments free from discrimination and harassment, we too must pledge to uphold compassion, tolerance, and acceptance in our communities and expect it of our society at large.

Last October, the White House Initiative on Asian Americans and Pacific Islanders (AAPIs), housed within the Department of Education, partnered with the Sikh Coalition and Coalition of Asian Pacifics in Entertainment to launch #ActToChange, a national public awareness campaign against bullying. Building upon the work of the interagency AAPI Bullying Prevention Task Force, ActToChange.org provides translated resources in common AAPI languages and empowerment messages. The campaign further engaged youth and AAPI public personalities in a live discussion about diversity and acceptance, and advocating for yourself and your community.

Discussions like these need to happen all across this nation. From our institutions of learning, to our places of worship, to our everyday behavior in our daily lives, we must ensure all of our children, families, and communities can live safely without the fear of persecution and with the freedom to practice their faith. The American experience is the immigrant experience, the refugee experience, the Hindu experience, the Christian experience, the Muslim experience. The diversity of experiences is the history and greatness of our country.  As the President said at the National Archives last month, “We must resolve to always speak out against hatred and bigotry in all its forms – whether taunts against the child of an immigrant farmworker or threats against a Muslim shopkeeper. We are Americans. Standing up for each other is what the values enshrined in the documents in this room compels us to do – especially when it’s hard. Especially when it’s not convenient. That’s when it counts. That’s when it matters – not when things are easy, but when things are hard.”

Shekar Narasimhan is a member of the President’s Advisory Commission on Asian Americans and Pacific Islanders. The Commission and the White House Initiative on AAPIs are housed in the U.S. Department of Education.