Chart of the Week: 2015 Was Earth's Hottest Year on Record

"It is a key data point that should make policy makers stand up and take notice–now is the time to act on climate."
NASA Administrator Charles Bolden

This is one record no one wants to break.

Since 2001, our planet has experienced 15 out of the 16 hottest years on record. Now, we know that 2015 was Earth's warmest year ever recorded. 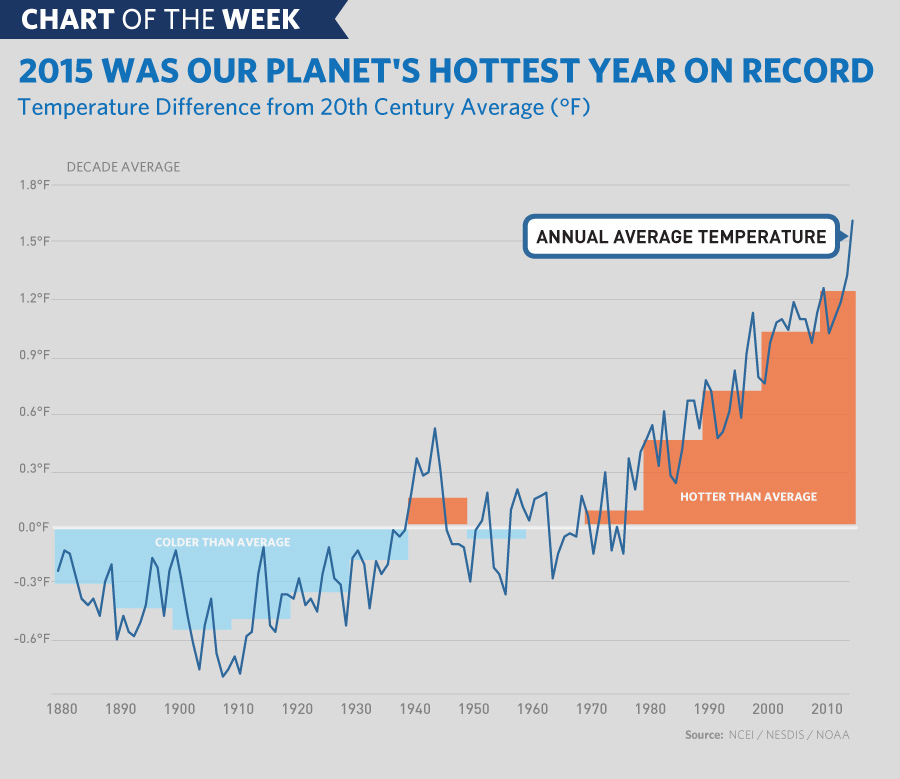 As President Obama said in his final State of the Union address, if you want to debate the science of climate change, feel free to do so–but you'll be pretty lonely. America's business leaders, the Pentagon, the majority of the American people, the scientific community, and nations around the world already know that now is the time to act.

That is why, with U.S. leadership, nearly 200 countries signed on to a historic climate agreement to reduce carbon pollution worldwide.

Under President Obama, the U.S. is leading the way with the Clean Power Plan, which sets achievable standards to reduce carbon dioxide emissions from power plants by 32 percent from 2005 levels by 2030. Learn more about what the Clean Power Plan means for Americans:

BREAKING: On Monday, President Obama will release the final version of America's Clean Power Plan—the biggest, most important step we've ever taken to combat climate change. If you agree that we can't condemn our kids and grandkids to a planet that's beyond fixing, share this video with your friends and family. It's time to #ActOnClimate.

It's not too late for people and policy makers to do their part to reduce carbon pollution and mitigate the impacts of climate change. Stay up to date on the President's actions here: wh.gov/climate.