Advance Estimate of GDP for the Fourth Quarter of 2015

The economy continued to expand in the fourth quarter, but at a slower pace than in the third. Overall, the most stable and persistent components of output—personal consumption and business investment—rose a solid 2.7 percent over the four quarters of 2015. Weaker foreign growth continued to weigh on domestic output in the fourth quarter, underscoring the importance of policies that open our exports to new markets while promoting strong domestic demand. There is more work to do, and the President is committed to policies that will boost our long-run growth and help ensure everyone shares in it: including through high-standards free trade agreements like the Trans-Pacific Partnership, increasing investments in infrastructure, and raising the minimum wage. 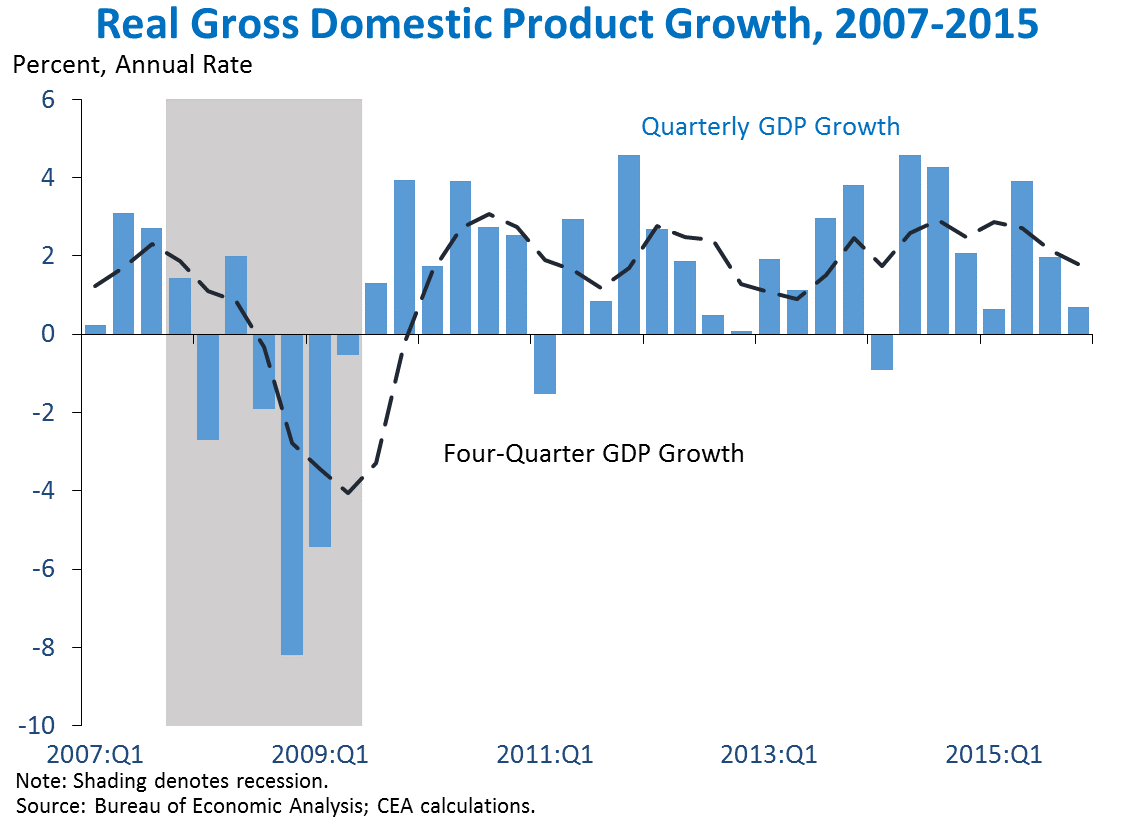 2. Labor market data were considerably stronger than output data in the fourth quarter. In the fourth quarter, the initially-estimated outperformance of job growth relative to GDP growth was the largest since at least 1990: employment rose 2.4 percent at an annual rate, compared with GDP growth of 0.7 percent. Economists generally expect indicators of economic output and of labor market performance to show similar patterns. To the degree that GDP and job growth data diverge, the gap can be attributable to noise in any given data point or to variation in productivity growth. The recent divergence of output growth and employment growth therefore illustrates the importance of focusing on a wide range of economic indicators—especially labor market data. 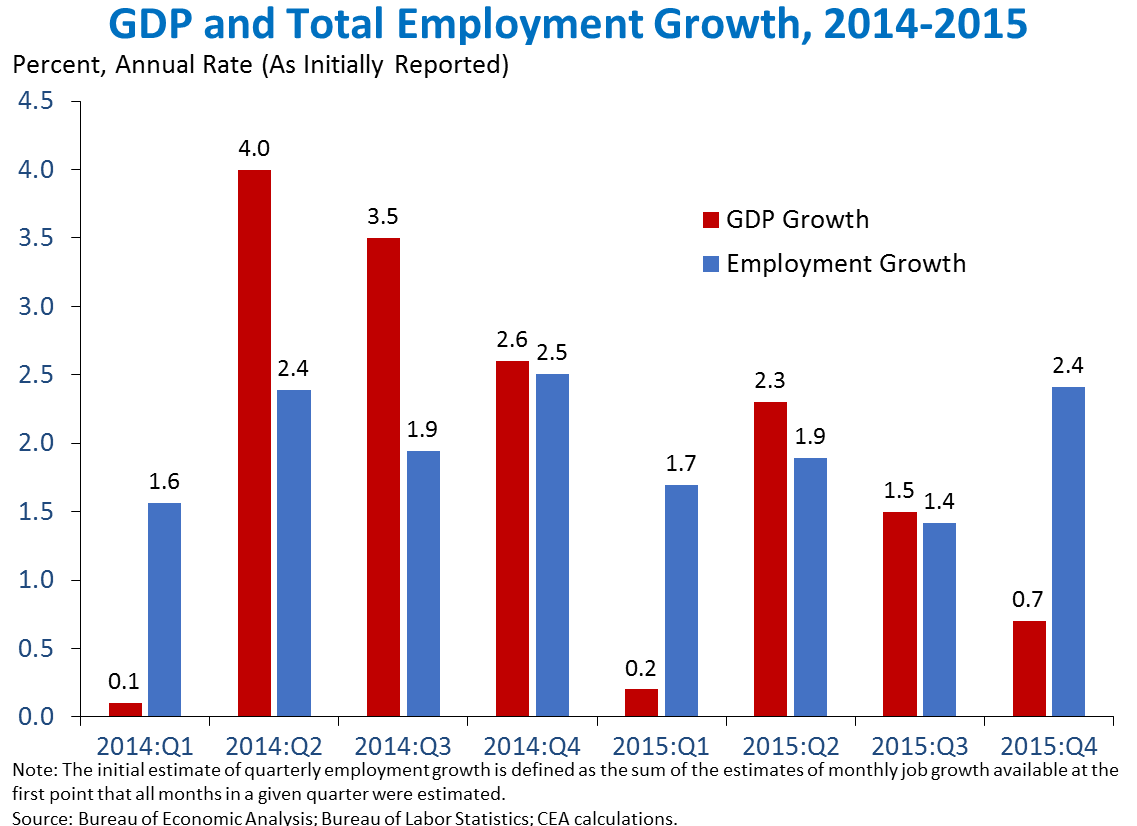 Measuring employment is somewhat more straightforward exercise than measuring real GDP, although employment estimates face measurement challenges as well. The formidable challenges with real GDP estimates—including estimating quality-adjusted price changes, services, and intangible goods—may introduce some measurement error that could help explain the discrepancy. In fact, the correlation between quarterly employment growth and GDP growth has been considerably lower in the last five years than at most times in prior decades. 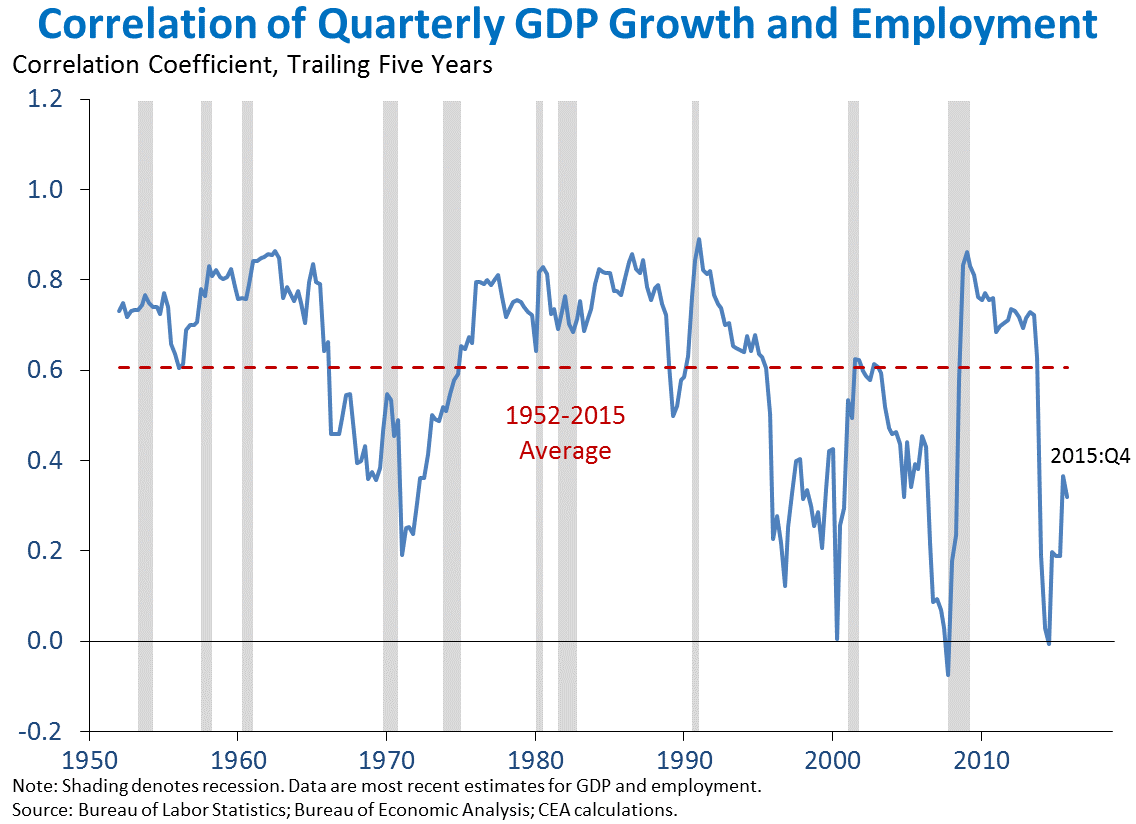 3. Real disposable personal income has grown more quickly than consumer spending, although the gap has narrowed since the first quarter of 2015. Real disposable personal income rose 3.4 percent over the past four quarters, a rapid pace. At the same time, real consumer spending rose only 2.6 percent. This difference indicates that consumers have tended to save a rising fraction of their income gains over the past year. In addition to current income gains, a number of other factors determine the extent to which consumers spend, including their expectations for future income growth, interest rates, and wealth. In the fourth quarter, especially slow utility spending subtracted from consumption, because the unseasonably warm weather reduced heating demand. The low oil price environment should continue to support real consumer spending growth, although the impact of recent financial market turmoil on household balance sheets would push in the opposite direction. 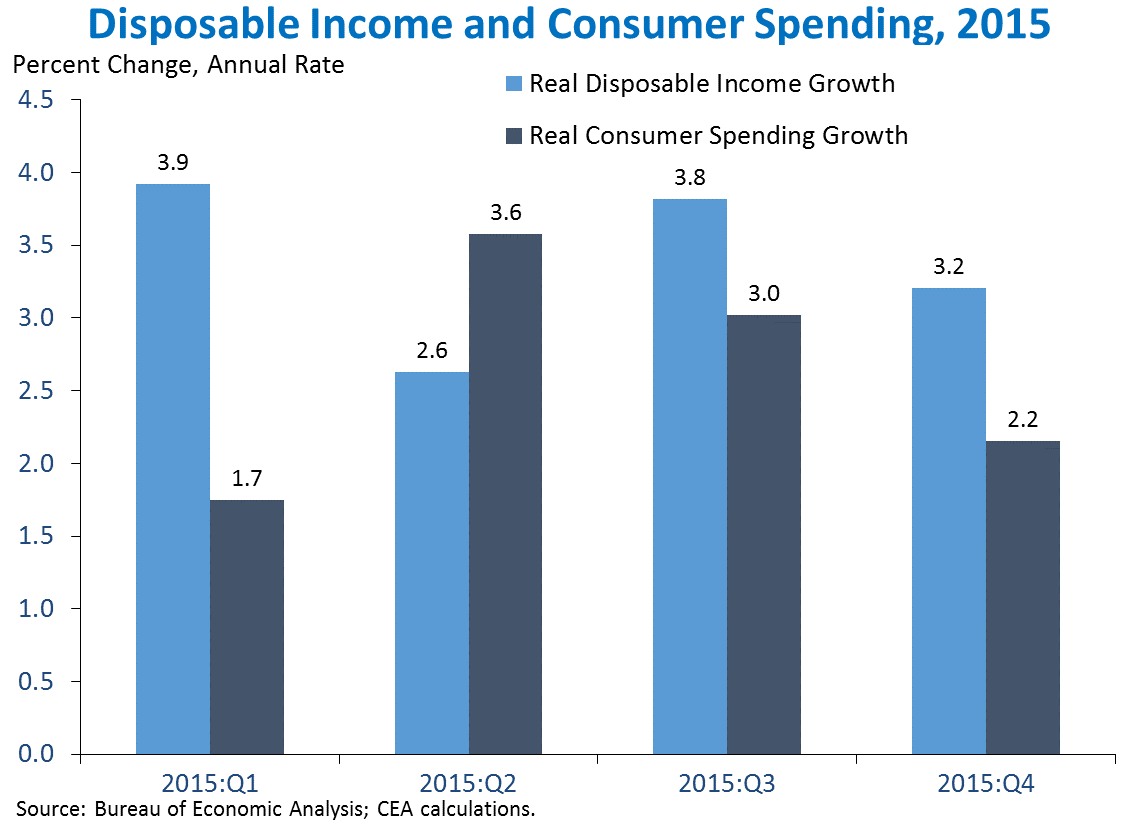 4. Net exports subtracted 0.6 percentage point from GDP growth over the past four quarters, reflecting the continued headwinds from slowing foreign growth on U.S. exports. The volume of U.S. exports to foreign countries is sensitive to foreign GDP growth. Indeed, year-over-year foreign GDP growth—when weighting countries by the volume of their annual trade with the United States—explains much of the variance in U.S. export growth. To the extent that the global slowdown persists, it will likely continue to weigh on U.S. export growth, as it has over the past year. In the fourth quarter, exports declined 2.5 percent, weighing on overall output growth. The sensitivity of our exports to foreign demand—especially in an environment where foreign demand is slowing—underscores the importance of reducing trade barriers and opening foreign markets to our exports. 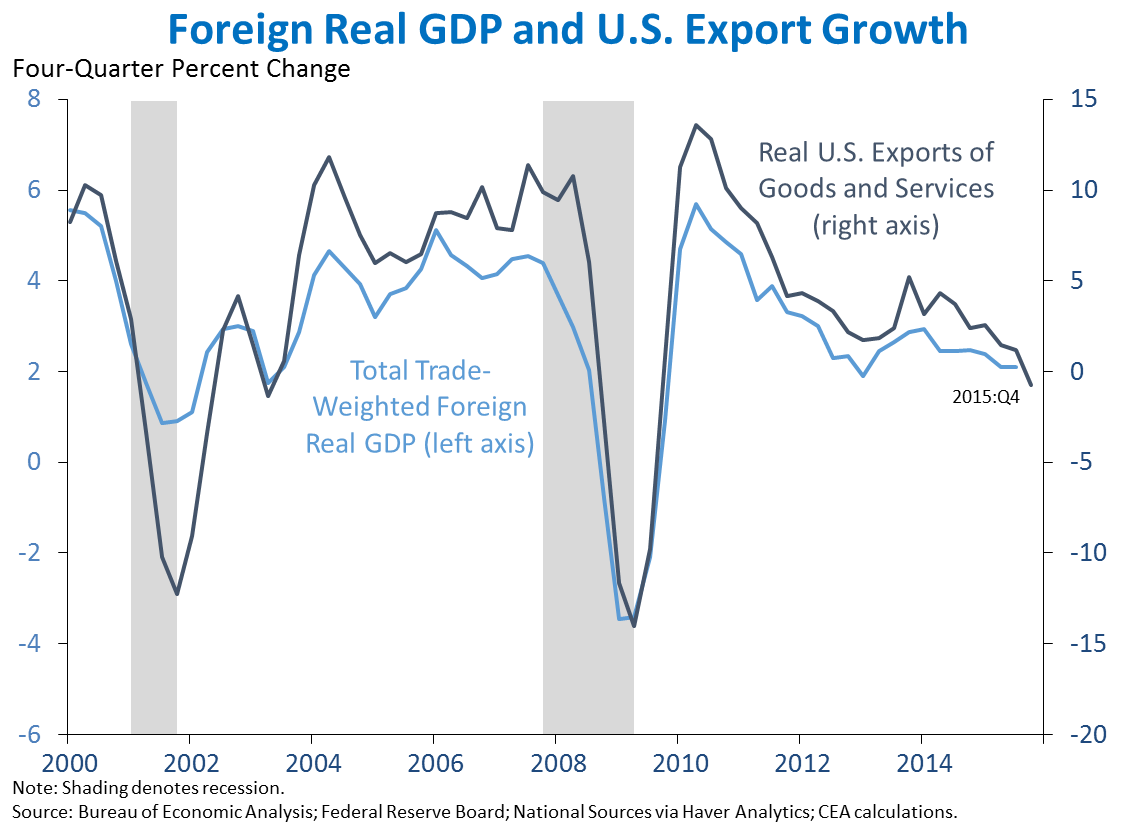 5. Real private domestic final purchases (PDFP)—the sum of consumption and fixed investment—rose 1.8 percent at an annual rate in the fourth quarter, a faster pace than GDP but a slower pace than in recent quarters. Real PDFP—which excludes noisier components like net exports, inventories, and government spending—is generally a more reliable indicator of next-quarter GDP growth than current GDP. In the current global environment, however, the drag from net exports has been relatively persistent. Overall, PDFP rose 2.7 percent over the past four quarters, compared with 1.8 percent GDP growth over the same period. The especially large gap between PDFP growth and GDP growth is mostly attributable to net exports, reflecting slowing growth abroad, and in part to more transitory factors like inventory investment. 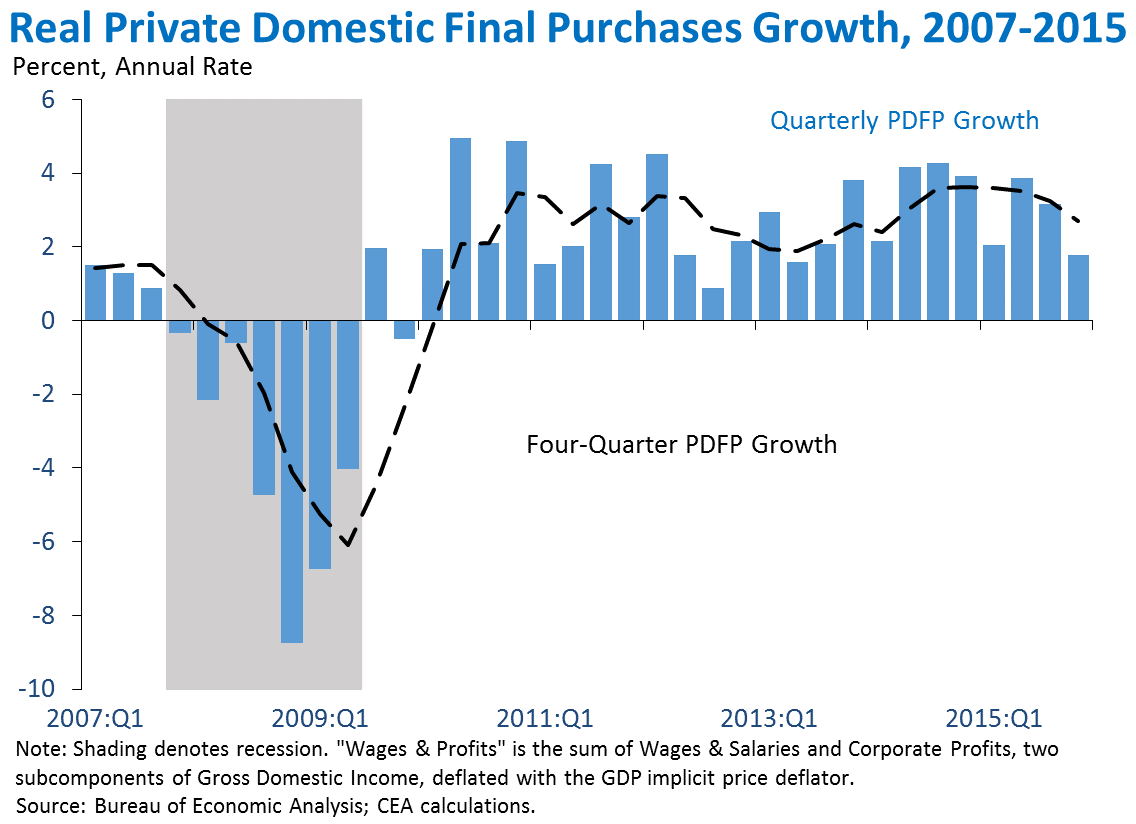