As Unemployment Drops Below 5%, Here Are Five Facts About America's Jobs Market

February 5, 2016 at 2:17 PM ET by Charlie Anderson
Twitter Facebook Email
Summary:
With the unemployment rate below 5 percent for the first time in almost 8 years, here are five things you need to know about where our economy stands.

Today, we learned that American businesses added 158,000 jobs in January, extending a record-breaking streak of private-sector job growth to 71 straight months – with wages growing at the fastest pace in years. We also learned that for the first time in almost 8 years, the unemployment rate dropped below 5 percent. Just two years ago, economists did not expect unemployment to fall below 5 percent until 2020. So here are five facts you should know about where America's economy stands today thanks to the President's leadership and the hard work of the American people.

As recently as 2012, the Blue Chip consensus of independent private sector economists was that unemployment would be 6.7 percent in 2015; would still be almost 6 percent in 2018; and would not fall below 5 percent until 2020. And yet, today it’s 4.9 percent.

Mitt Romney predicted his policies, if he were elected, would bring unemployment down to 6 percent – by the end of 2016, and one publication called that “a bold claim that Romney will surely be held to by Democrats if he’s elected.” To put that into perspective, if the unemployment rate were 6.7 percent today, roughly 2.7 million additional Americans would be out of work. If it were 6 percent, roughly 1.5 million additional Americans would be unemployed. 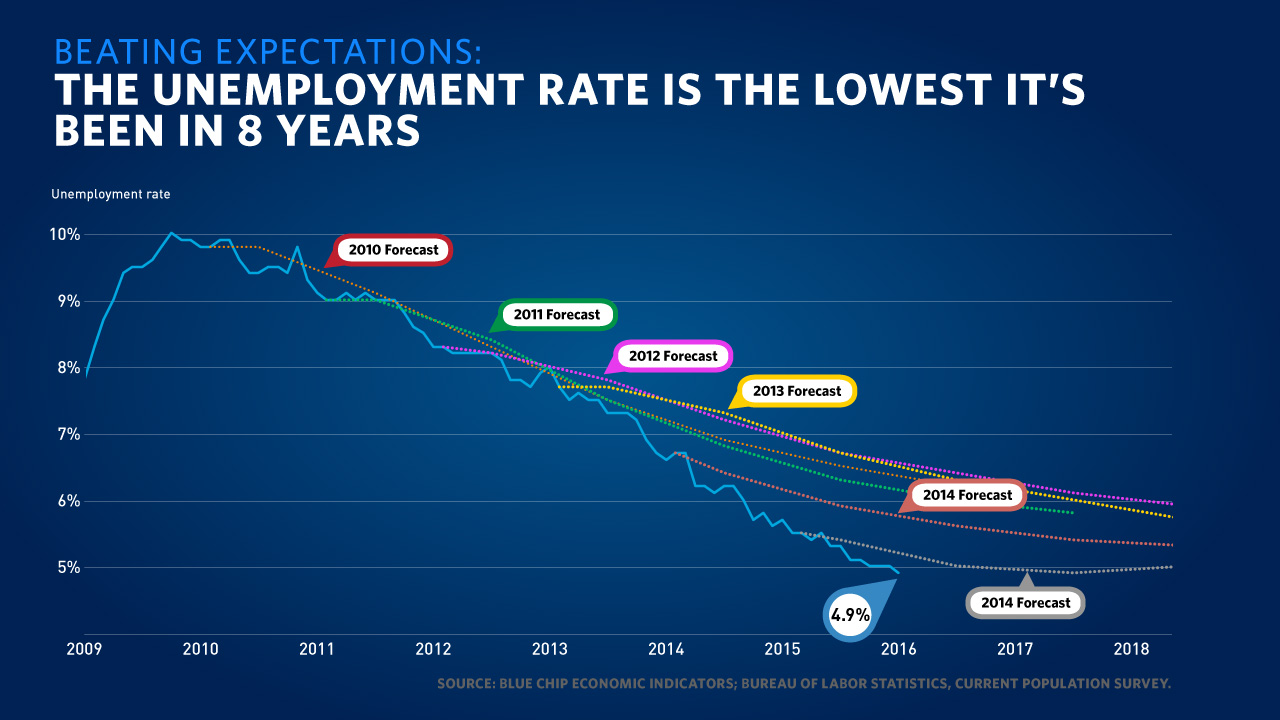 2. We’ve cut the unemployment rate by more than half

3. All of the jobs our businesses have been created are full-time jobs

All of the net job creation since 2010 has been full-time jobs, despite erroneous claims by detractors that Obamacare (which passed in March 2010) would create or has created a “part time economy.” 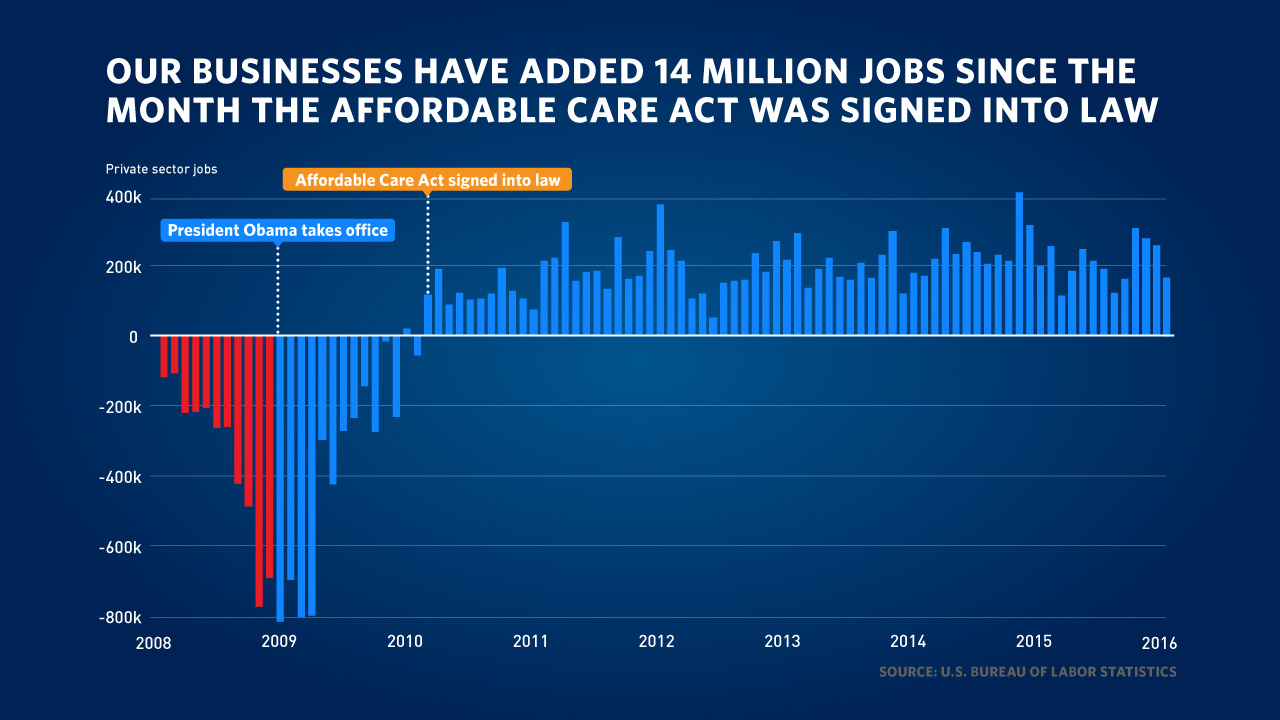 4. We have the most job openings ever recorded

We have 5.4 million open jobs today – and job openings have been higher since mid-2015 than at any time since we started keeping records in 2000. 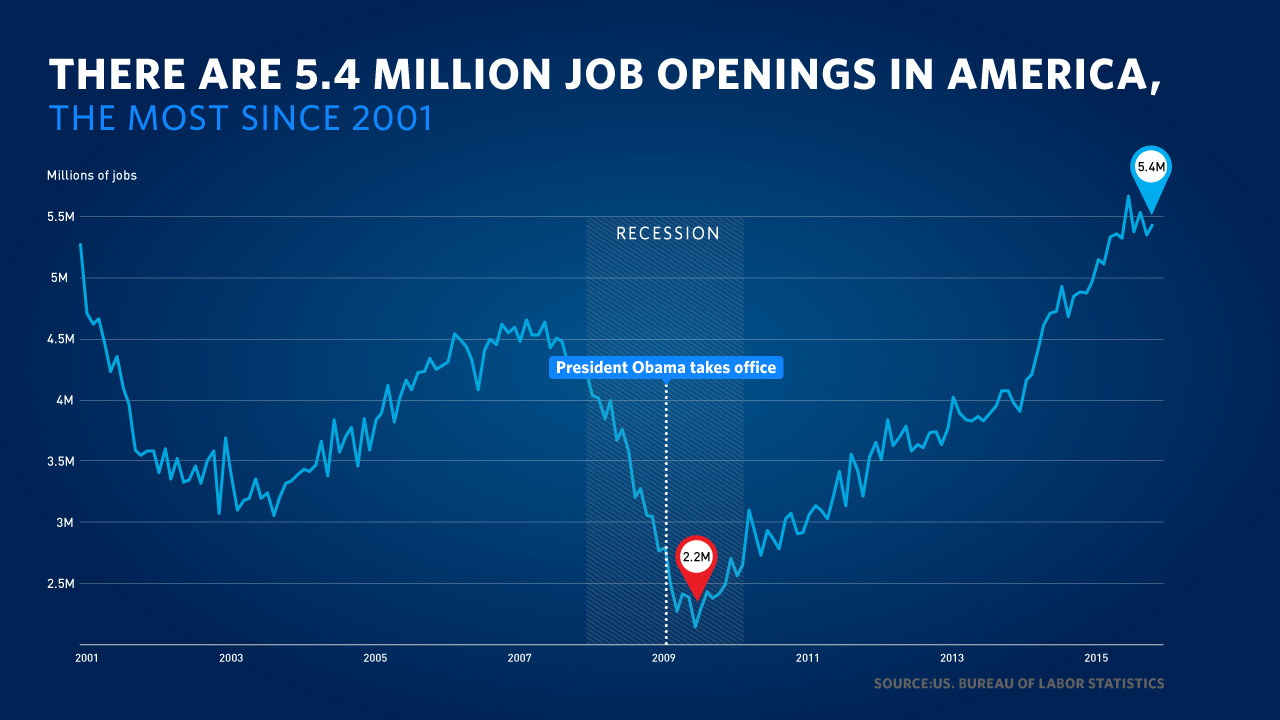 5.  Wages have grown at the fastest pace since the financial crisis

Over the last six months, average hourly earnings for all private employees rose 2.9 percent at an annual rate, the fastest pace since the financial crisis. 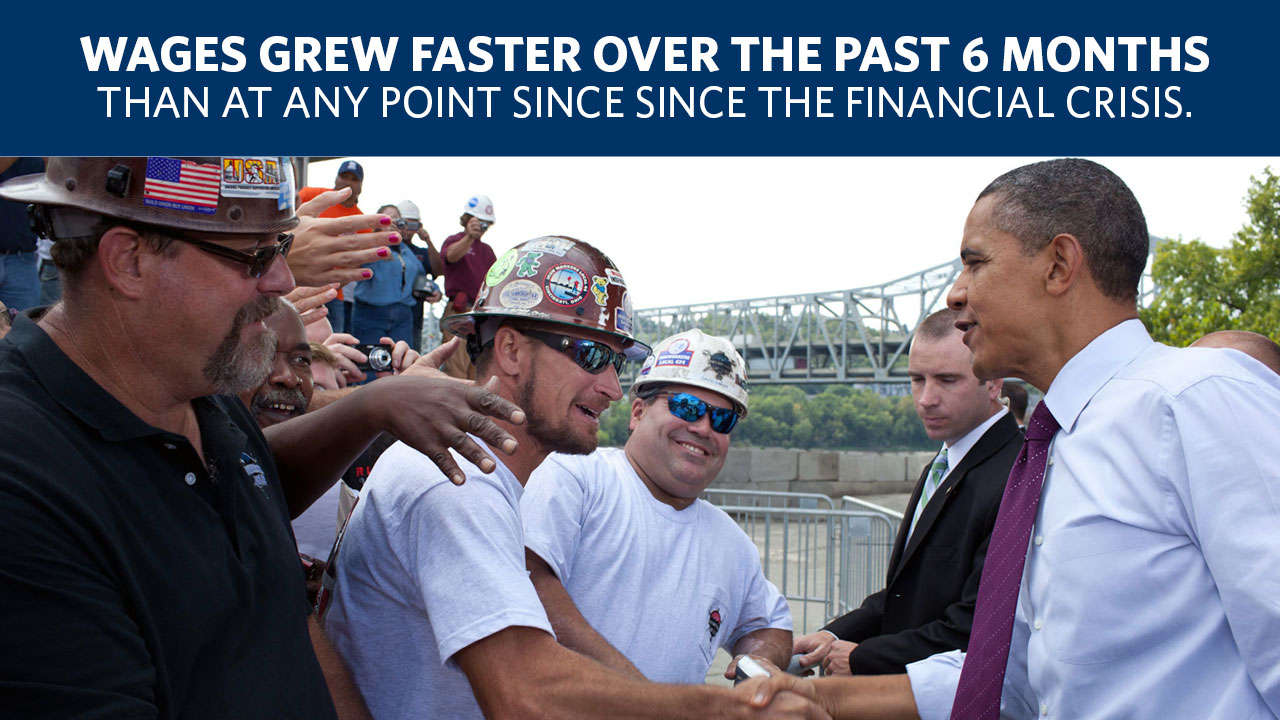 Now we should continue to do everything we can to extend these positive trends, including increasing investments in infrastructure, implementing high-standards free trade agreements like the Trans-Pacific Partnership, and raising the minimum wage.

Senior Adviser to the Director of the National Economic Council