The robust pace of job creation continued in March as labor force participation rose for the fourth consecutive month and hourly wages increased. The private sector has now added 14.4 million jobs over 73 straight months of job growth, the longest streak on record, and wage growth has accelerated over the past year. While these trends speak to the strength of the labor market recovery, more work remains to drive even faster wage growth, including investing in infrastructure and job training, implementing high-standards free trade agreements like the Trans-Pacific Partnership, and raising the minimum wage.

FIVE KEY POINTS ON THE LABOR MARKET IN MARCH 2016

1. U.S. businesses have now added 14.4 million jobs over 73 straight months, extending the longest streak on record. Today we learned that private employment rose by 195,000 jobs in March. Total nonfarm employment rose by 215,000 jobs in March, in line with the pace of recent months and well above the pace necessary to maintain a low and stable unemployment rate given longstanding demographic trends in labor force participation, which CEA estimates at 80,000 jobs per month. The unemployment rate ticked up to 5.0 percent in March, while the labor force participation rate rose to 63.0 percent, reaching the same level as November 2013. Over the past six months, the labor force participation rate has increased by 0.6 percentage point, the largest six-month increase since 1992. Average hourly earnings for private employees increased by 7 cents in March, more than reversing their drop in February, and have grown 2.3 percent over the past year. 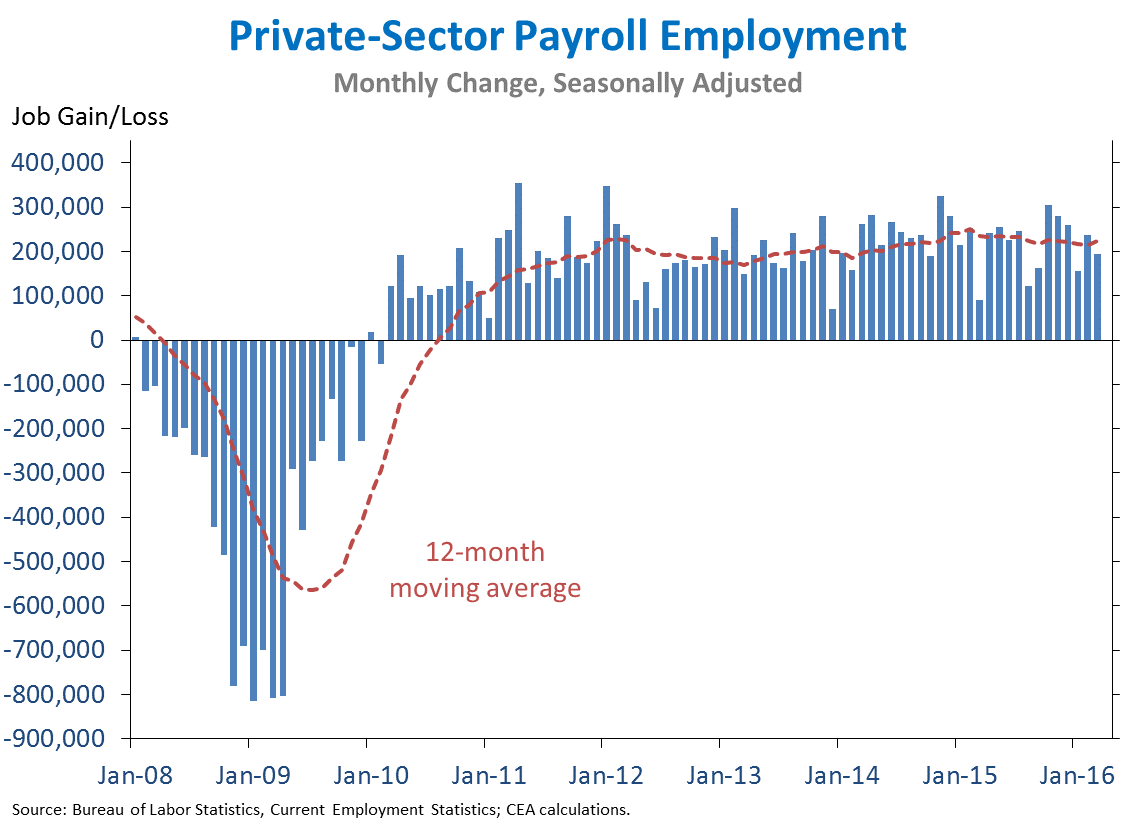 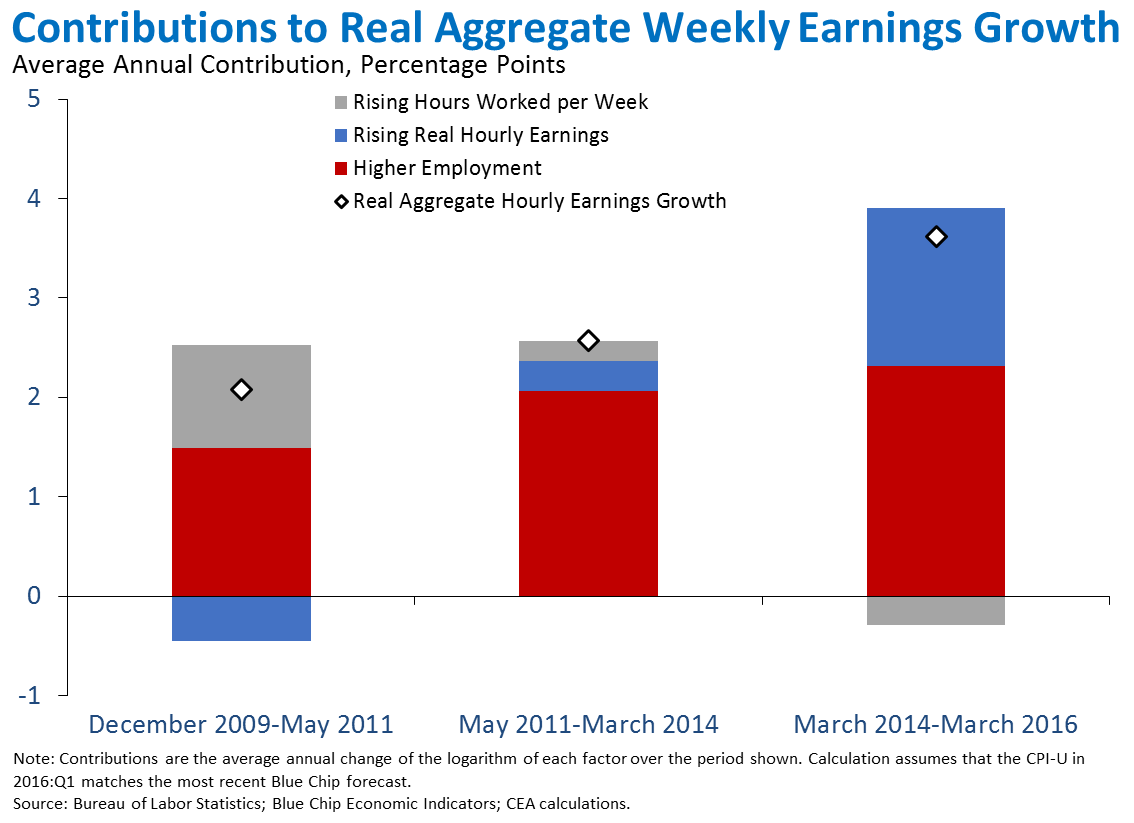 3. To mark Equal Pay Day (April 12), we note the progress that has been made in closing the earnings gap since the Great Recession, as well the work that remains. Since late 2007, women’s usual weekly earnings have grown at a slightly faster pace than those of men, and the weekly earnings gap has narrowed as a result. The ratio of women’s usual weekly earnings to men’s was 80.8 percent at the end of 2015, up from 79.5 percent at the end of 2007. Many factors—including education, experience, occupation, and industry—contribute to the wage gap, but according to recent research by economists Francine Blau and Lawrence Kahn, about 38 percent of the wage gap is still unexplained by these (and other) observable factors. The ratio of women’s usual weekly earnings to men’s is slightly greater than the commonly cited figure of 79 percent, which is the ratio of annual earnings for the typical woman working full-time, full-year compared to those of a typical man. The difference between these two measures—which reflects differences in the number of weeks that men and women work during the year—highlights the challenges that many women face in balancing work and family. Policies like paid family leave and paid sick leave that ensure that workplaces better reflect the needs of working families would build on the progress made since the recession in closing the wage gap. 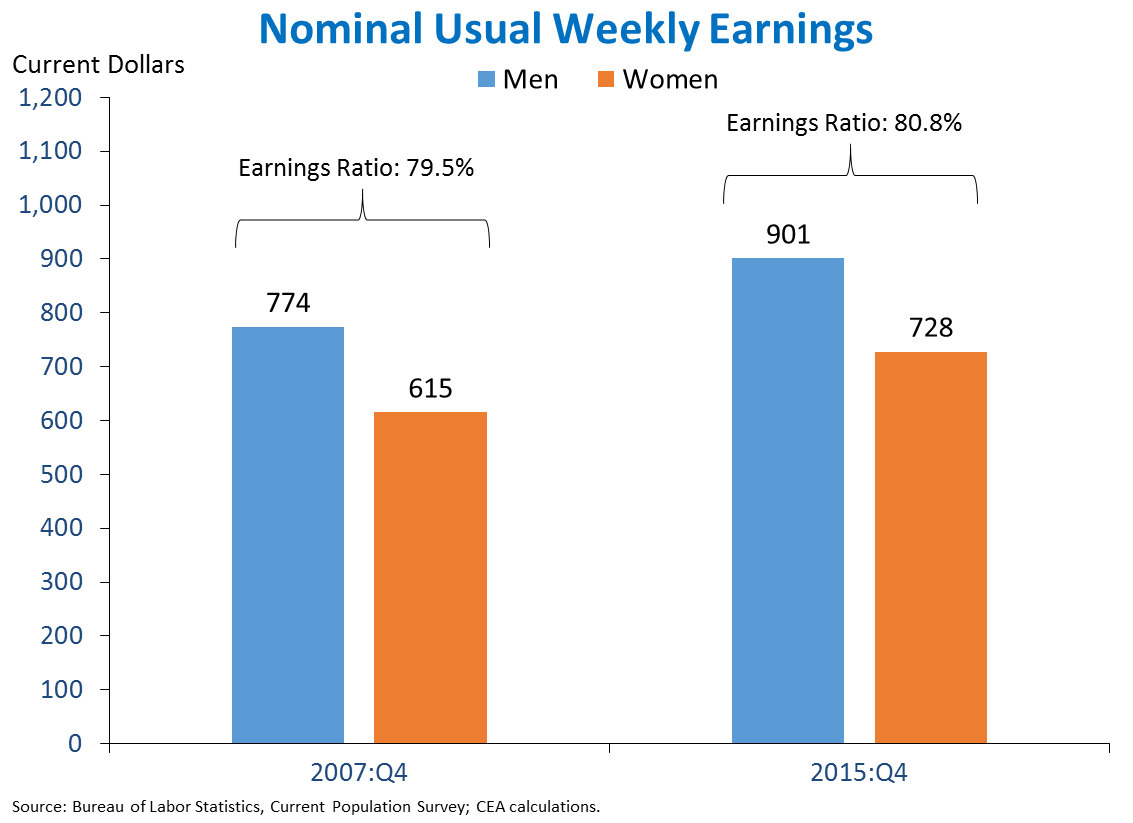 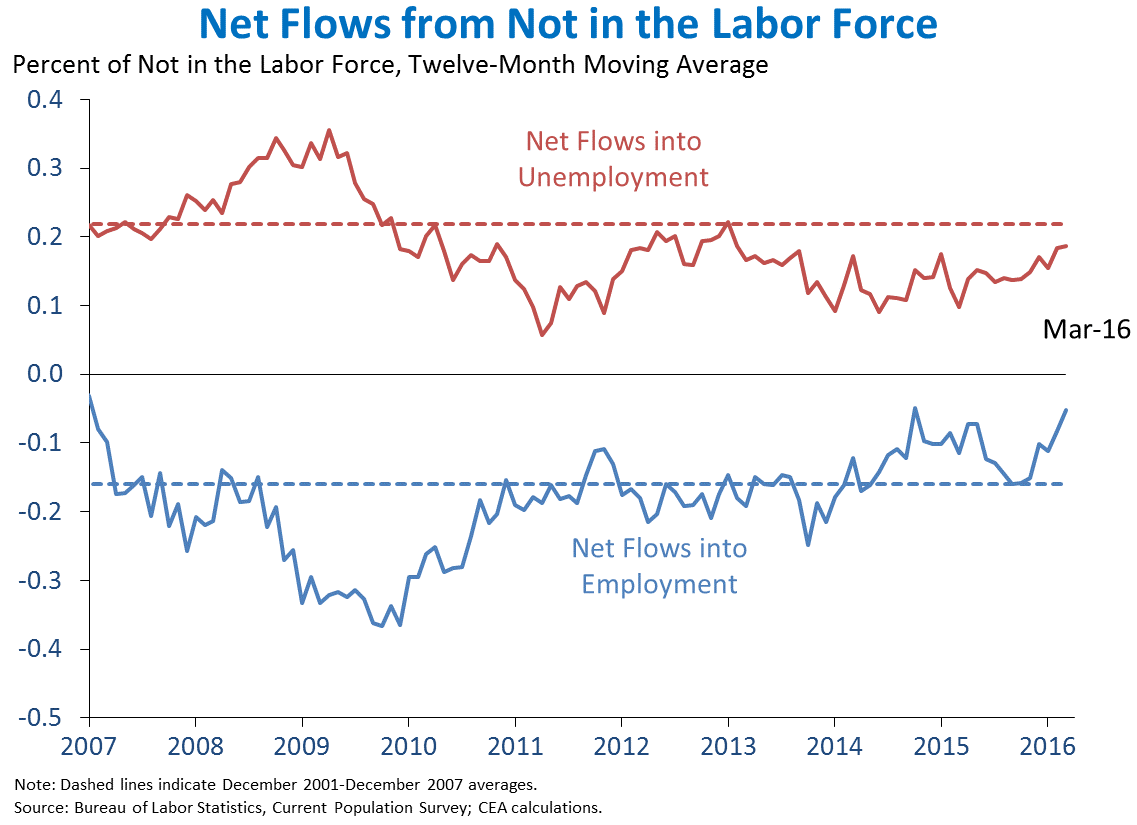 5. The distribution of job growth across industries in March generally followed recent trends, with global headwinds continuing to restrain job growth in certain industries, especially manufacturing and mining. Above-average gains relative to the past year were seen in industries such as State and local government (+18,000), retail trade (+48,000), and construction (+37,000). Manufacturing (-29,000) had a noticeably weak month in March, while employment in mining and logging, which includes oil extraction, continued to decline (-12,000). Slowing global growth has weighed on job growth in both of these industries, as weaker foreign demand has put pressure on U.S. exports and has contributed to the decline in oil prices. Across the 17 industries shown below, the correlation between the most recent one-month percent change and the average percent change over the last twelve months was 0.98, well above the average correlation over the previous three years. 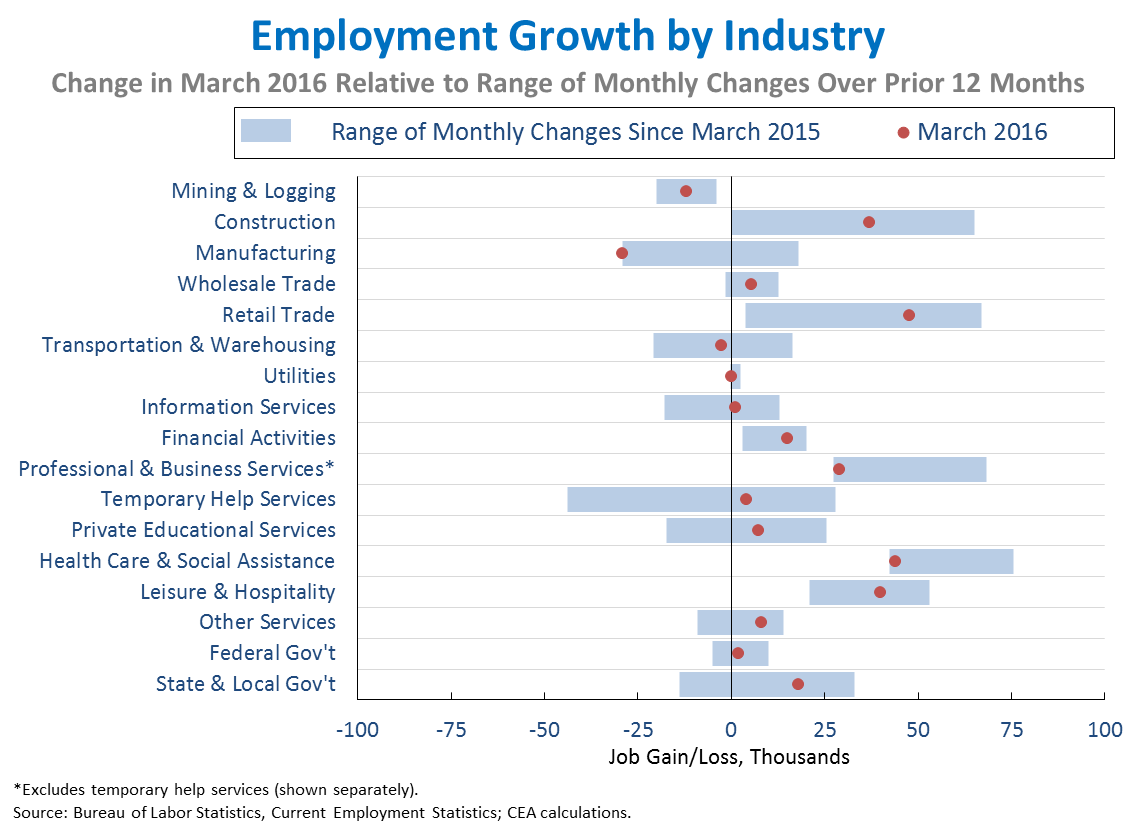