Chart of the Week: How Automation May Impact the Way We Work

July 5, 2016 at 5:04 PM ET by Simone Leiro
Twitter Facebook Email
Summary:
Learn how technological advancements in automation may impact the way that we work and live and how the Obama Administration is preparing for these changes.

This week, Chief of Staff Denis McDonough moderated a Facebook Live conversation between transportation entrepreneur Robin Chase and software futurist Martin Ford about automation, robots, and how they impact the way we work and live. In their conversation, they talked about the fact that the less you make in hourly wages, the more likely it is that your job will be replaced by automation. 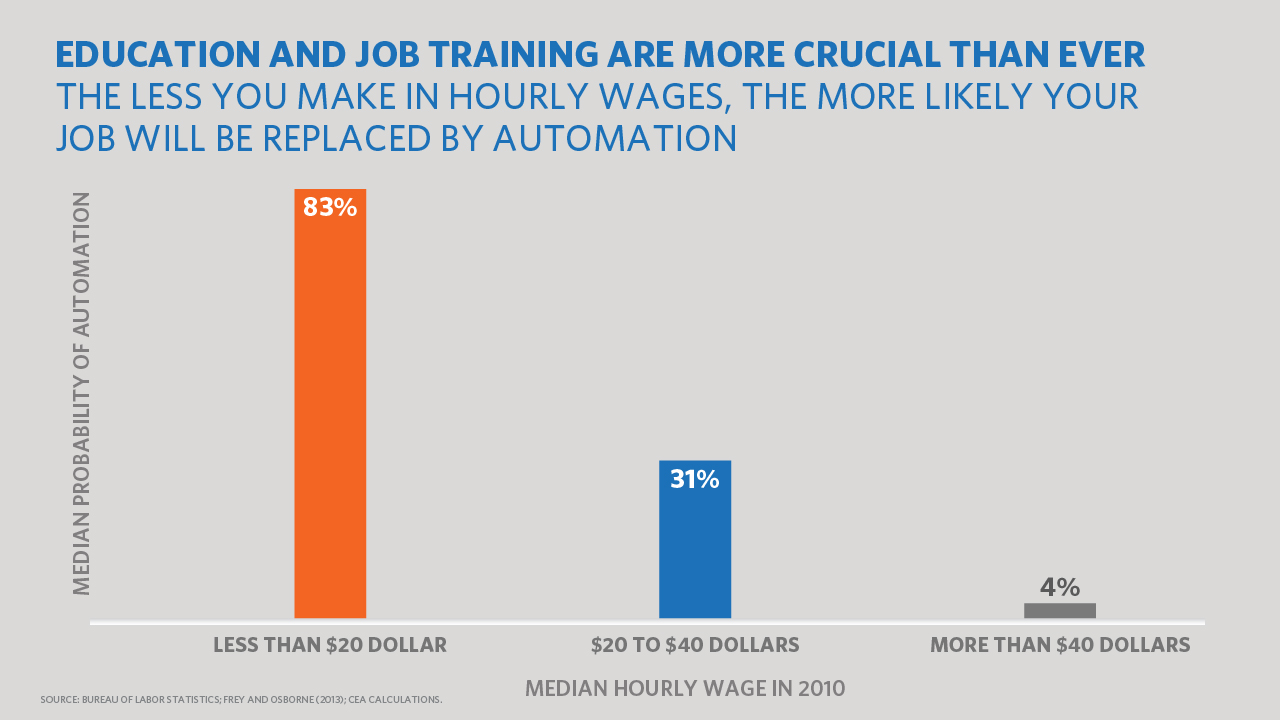 As this chart illustrates, people who earn higher hourly wages are more likely to hold jobs that withstand the changes in the workforce brought by automation. That's why the President has prioritized taking a proactive approach to automation by ensuring that all Americans have access to the tools that they need to obtain jobs with high wages.

The Administration's initiatives like TechHire and Computer Science For All help make sure that Americans across our country are prepared to obtain jobs where growth will flourish, instead of diminish, due to technological advances. Through helping Americans gain access to jobs with higher wages, we can to ensure that Americans don’t lose jobs to automation.

Find out more about the President's initiatives to ensure that all Americans have access to the tools that they need to secure jobs that will endure through future technological advances:

COMPUTER SCIENCE FOR ALL

Computer Science for All is the President’s bold new initiative to empower all American students from kindergarten through high school to learn computer science and be equipped with the computational thinking skills they need to be creators in the digital economy, not just consumers, and to be active citizens in our technology-driven world.

The President's CS For All announcement included:

In March of 2015, President Obama announced his TechHire initiative, a new campaign to expand local tech sectors by building tech talent pipelines in communities across the country.

Grant winners and TechHire community partnerships focus on the following:

​The Department of Labor estimates that more than 18,000 participants will receive services through the TechHire grant program. Over $125 million of the grants will go to partnerships that specifically target, train, and support young people, ages 17-29. In addition, $24 million will go to partnerships that help other disadvantaged groups with barriers to employment, including veterans, people with disabilities, people with limited English proficiency, and people with criminal records.

Want to learn more about automation and how it impacts way we live and work? Watch the full conversation with transportation entrepreneur Robin Chase and software futurist Martin Ford, moderated by Denis McDonough and streamed on Facebook Live.