Computer Science For All

January 30, 2016 at 6:05 AM ET by Megan Smith
Twitter Facebook Email
Summary:
Learn about President Obama’s bold new initiative to empower a generation of American students with the computer science skills they need to thrive in a digital economy.

In the coming years, we should build on that progress, by … offering every student the hands-on computer science and math classes that make them job-ready on day one.
President Obama in his 2016 State of the Union Address 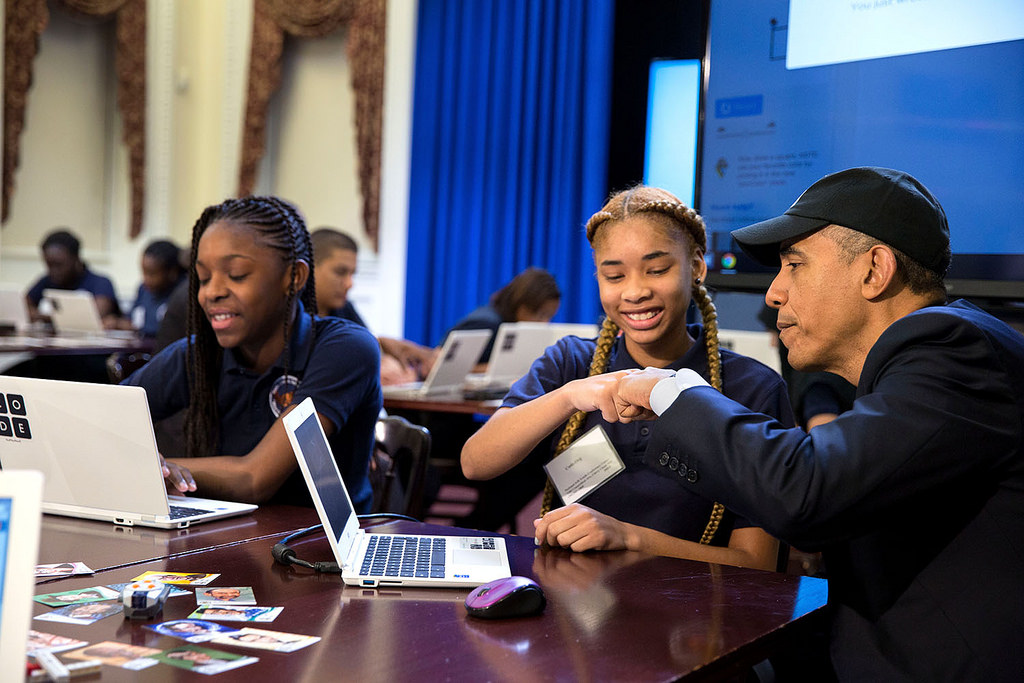 Computer Science for All is the President’s bold new initiative to empower all American students from kindergarten through high school to learn computer science and be equipped with the computational thinking skills they need to be creators in the digital economy, not just consumers, and to be active citizens in our technology-driven world. Our economy is rapidly shifting, and both educators and business leaders are increasingly recognizing that computer science (CS) is a “new basic” skill necessary for economic opportunity and social mobility.

An Investment in Knowledge Pays the Best Interest
Benjamin Franklin

CS for All builds on efforts already being led by parents, teachers, school districts, states, and private sector leaders from across the country.

The President’s initiative calls for:

The Need for CS For All

Last year, there were more than 600,000 high-paying tech jobs across the United States that were unfilled, and by 2018, 51 percent of all STEM jobs are projected to be in computer science-related fields. Computer science and data science are not only important for the tech sector, but for so many industries, including transportation, healthcare, education, and financial services.

Parents increasingly recognize this need — more than nine of 10 parents surveyed say they want computer science taught at their child’s school. However, by some estimates, just one quarter of all the K-12 schools in the United States offer high-quality computer science with programming and coding and 22 states still do not allow it to count towards high school graduation, even as other advanced economies are making it available for all students.

Wide disparities exist even for those who do have access to these courses. In addition to course access challenge, media portrayals, classroom curriculum materials, unconscious bias and widely-held stereotypes exacerbate the problem and discourage many of our students from taking these courses. For example, in 2015, only 22 percent of students taking the AP Computer Science exam were girls, and only 13 percent were African-American or Latino students. These statistics mirror the current makeup of some of America’s largest and more innovative tech firms in which women compose less than one-third of their technical employees, and African-Americans less than 3 percent. We can do better!

Tech careers are exciting, fun, high-impact, and collaborative as well as being critical for our economy. We want all Americans to have the opportunity to be part of these teams. CS For All will help make that a reality and ensure every student has access to Computer Science in their classrooms at all levels.

When it comes to computer science, we can all be students and President Obama led the way as our CS Student Coder-in-Chief when he became the first President to write a line of code himself. His first line of code was moveForward<100> and that’s what CS for All is all about: moving forward together. Who taught him to code? A middle-school student named Adrianna from Newark, New Jersey, who took a computer science course at her school.

If the President can start learning computer science, so can you! We know you need the basic tools to make it possible, including teachers, infrastructure, and Wi-Fi. Thanks to the President’s ConnectED initiative, we’re well on our way making that happen, closing the connectivity divide by in schools by over half — empowering 20 million more students with high-speed broadband, and enlisting over 2,000 school districts in the cause. And in order to make sure youth have pathways into the workforce and that adults have access to these skills, the President launched TechHire, which has expanded into 35 cities, states, and rural areas. 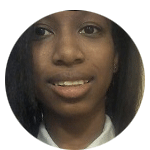 Grace Clark is a sophomore at International High School in New Orleans, Louisiana and interns with Operation Spark, which offers free technology training and coding courses to young people in New Orleans. Grace worked with the New Orleans Police Department on a policing data event where she taught New Orleans Police Chief Michael Harrison to write his first line of code. She also teaches coding to children at Arthur Ashe Elementary and attended the 2014 Essence Festival to represent inner city youth in coding and technology. 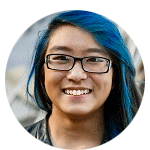 Christina Li is a senior at Adlai E. Stevenson High School in Macomb, Michigan She is the Vice President of Controls for her FIRST robotics team, the ThunderChickens. Christina also created Hello World, a week-long computer science day camp for 30 middle school girls to learn how to code robots, apps, websites, and games in the hopes of reducing the gender gap in computer science.

The field of computer science education has come a long way in just a few years.  With support from NSF, new high school courses like Exploring Computer Science and AP Principles of Computer Science have been designed to be more inclusive and accessible to all students and other courses and programs are designed for early elementary schools. NSF also funded a middle school and freshman focused course called “Bootstrap” and a wide-range of curriculums have emerged to teach computer science and computational thinking in elementary, middle, and high school.

Because CS is an active and applied field of Science, Technology, Engineering and Math (STEM) learning that allows students to engage in hands-on, real-world interaction with key math, science, and engineering principles, it gives students opportunities to be creators ­— not just consumers — in the digital economy, and to be active citizens in our technology-driven world. CS can also help foster computational thinking skills that are relevant to many disciplines and careers, such as breaking a large problem into smaller ones, recognizing how new problems relate to problems already solved, setting aside details of a problem that are less important, and identifying and refining the steps needed to reach a solution. CS also complements the President’s Nation of Makers initiative, which focuses on the growing democratization of the hardware and software tools needed to design and make just about anything.

As a teacher, school leader, or superintendent, you can help expand CS for All in many different ways. For example you can: 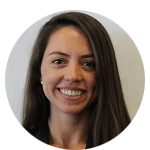 Andrea Chaves is a Spanish and computer science teacher and creative director at the Young Women’s Leadership School in Astoria, New York where she has integrated digital education and coding into all of her classes, including Spanish. Andrea also leads a group of students known as the “Tech Crew,” composed of filmmakers, graphic designers, coders, website designers, and project managers. Under Andrea’s guidance, these young women collaborate to solve problems around school like teaching students about recycling through coding educational video games. 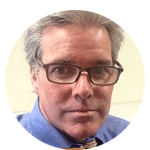 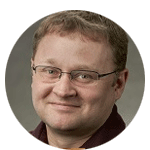 Andreas Stefik, Ph.D. is an assistant professor of computer science at the University of Nevada, Las Vegas. For the last decade, he has been creating technologies that make it easier for people, including those with disabilities, to write computer software. With grants from NSF, he established the first national educational infrastructure for blind or visually impaired students to learn computer science. He is the inventor of Quorum, the first evidence-oriented programming language.

States and cities have been leaders in the movement to expand CS education. In 2014, responding to the President’s call to action, more than 60 school districts committed to give more of their students an opportunity to learn CS. In just the past year, both Republican and Democratic state leaders have championed ambitious CS efforts, and New York City announced an aggressive 10-year plan to expand CS opportunities to all one-million of its students. Today, leaders at the state and local levels are announcing new and expanded commitments to expand CS, including: 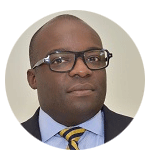 The Chattanooga community has worked together to create an ecosystem for youth to learn computer science skills to be prepared for future technology-infused industries. Cordell Carter is the Chief Executive Officer of TechTown Foundation, Inc., a next-generation learning center that offers programs for children of all skill levels from ages 7 to 17. TechTown’s approach aims to give youth hands-on learn-it-by-doing-it experience, allowing kids to discover, learn, and explore the limitless possibilities of their imaginations.

Jane Margolis is a researcher at the University of California, Los Angeles, where she investigates why few women and students of color have learned computer science. She and her collaborators, with support from the National Science Foundation, created Exploring Computer Science, a high school curriculum and teacher professional development program committed to reaching all students, especially those in underserved communities and schools, which now exists across the nation, including in seven of the largest school districts. 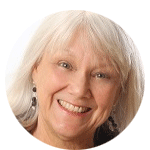 Karen North is a retired computer science and math teacher from Houston, Texas and has advocated for Computer Science education since 1985. She has fought to keep computer science certification for teachers and played an integral part in increasing programming and computational thinking in the K-8 Texas math standards. She now serves as a Code.org affiliate and a Code Buddy for Spring Branch Independent School District.

A growing list of K-12 district leaders are committing to support the President’s vision of expanded computer science curricula for K-12 students. See the full list.

Commitments to Expand CS for All

Dozens of private sector partners and nonprofit organizations as well as state and local governments have stepped up to support CS for All, below are just a few of those commitments. See the full list here.

Local leaders are using computer science to solve many of our most intractable local challenges and opportunities: Check out the Smart Cities Initiative, Police Data Initiative, TechHire, and more.

Involving our young people in real problems they can help solve in their own communities is a best practice in education and is exciting for our youth. Next Generation High Schools ) typically have significant computer science opportunities for American youth that pull them in as partners in solving challenges and engaging in their future. Seattle leadership hosted “Hack-the-Commute” involving community members from across the city.  New Orleans is engaging youth and others in their open data initiatives as part of their work on the Police Data Initiative with 25 other cities. Denver libraries are hosting teen-developer camps. Let’s do more of this youth engagement as part of their learning experience!

Businesses and philanthropies have also played a major role in building a movement to expand CS nationally.

How You Can Engage

You can support the President's announcement on social media using the hashtag #CSforAll.