It’s All About the Tubmans: An Important Step toward Equal Pay on Women’s Equality Day

On June 14th, 2016, at the first-ever United State of Women Summit, President Obama announced a new Equal Pay Pledge signed by 28 of America’s leading businesses committed to closing the gender pay gap. In his remarks, he called on more businesses to step up and pledge themselves to gender equality. Today, on Women’s Equality Day, we’re happy to announce that an additional 29 businesses have signed on to the pledge. 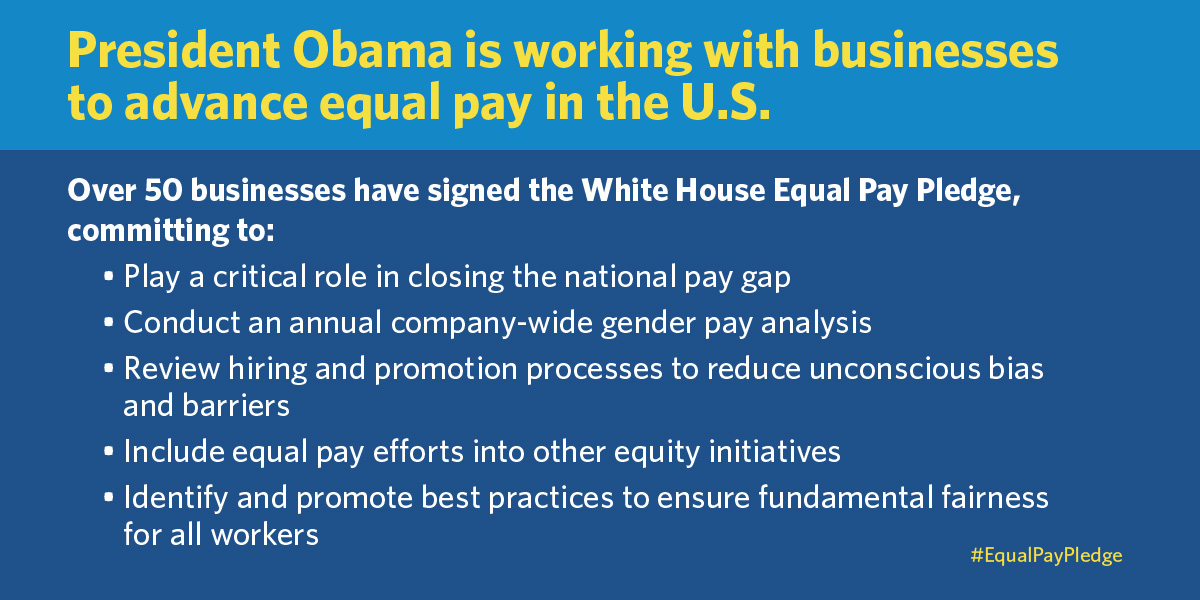 In 2016, the typical woman still earns only 79 cents for every dollar a typical man earns. That number decreases to 64 cents for African American women, 59 cents for Native American women, and 54 cents for Latinas. These pay gaps don’t just affect each individual paycheck; over the course of their careers, women miss out on overtime pay, contributions to retirement, their 401(k), and social security. Pay gaps may start small, but they compound and grow when hiring and promotion practices are left unexamined.

The fact that influential companies are taking up the President’s challenge and taking the Equal Pay Pledge is one of many signs of momentum built by a growing movement for equal pay. But we know that the movement doesn’t stop at a pledge. We know we are strongest when we work together to find new paths forward with leadership from across sectors. That’s why, today, we are excited to announce that a group of White House Equal Pay Pledge employers have formed an independent business consortium, Employers for Pay Equity—to help private industry players share best practices and develop better hiring, promotion, and pay policies.

“The Employers for Pay Equity consortium is comprised of companies that understand the importance of diversity and inclusion, including ensuring that all individuals are compensated equitably for equal work and experience and have an equal opportunity to contribute and advance in the workplace. We are committed to collaborating to eliminate the national pay and leadership gaps for women and ethnic minorities. Toward that end, we have come together to share best practices in compensation, hiring, promotion, and career development as well as develop strategies to support other companies’ efforts in this regard. By doing so, we believe we can have a positive effect on our workforces that, in turn, makes our companies stronger and delivers positive economic impact.”

We couldn’t be prouder of these leading businesses and the work they’re doing to improve the lives of women and others who experience gaps in pay.

We know that there’s more work still to do to close the pay gap, including passing equal pay legislation, but today, on the 96th anniversary of the ratification of the 19th amendment, we remember that one of our greatest strengths as a nation is our capacity to become a more perfect union, and we celebrate the steps, large and small, which bring us closer to our goals.