September 2, 2016 at 9:30 AM ET by Jason Furman
Twitter Facebook Email
Summary:
The economy added 151,000 jobs in August, as the unemployment rate and labor force participation both held steady.

The economy added 151,000 jobs in August following robust job growth in both June and July as the unemployment rate held steady at 4.9 percent. U.S. businesses have now added 15.1 million jobs since early 2010, and the longest streak of total job growth on record continued in August. So far in 2016, job growth has averaged a solid 182,000 jobs a month, well above the pace of about 80,000 jobs a month needed to maintain a low and stable unemployment rate, and hourly earnings for private-sector workers have increased at an annual rate of 2.8 percent, much faster than the pace of inflation. Nevertheless, more work remains to sustain faster wage growth and to ensure that the benefits of the recovery are broadly shared, including investing in infrastructure, implementing the high-standards Trans-Pacific Partnership, and raising the minimum wage.

FIVE KEY POINTS ON THE LABOR MARKET IN AUGUST 2016

1. U.S. businesses have now added 15.1 million jobs since private-sector job growth turned positive in early 2010. Today, we learned that private employment rose by 126,000 jobs in August, following a robust average gain of 232,000 jobs in June and July. Total nonfarm employment rose by 151,000 jobs in August, below the monthly average for 2016 so far but substantially higher than the pace of about 80,000 jobs per month that CEA estimates is necessary to maintain a low and stable unemployment rate given the impact of demographic trends on labor force participation. The unemployment rate held steady at 4.9 percent in August. The labor force participation rate remained at 62.8 percent, the same rate as in October 2013 despite downward pressure from demographic trends. So far in 2016, nominal earnings for private-sector workers have increased at an annual rate of 2.8 percent, well above the pace of inflation (1.3 percent as of July, the latest data available).

2. As the labor market has strengthened, the share of employees quitting their jobs has recovered to roughly its pre-recession average. The quits rate tends to fall in recessions and rise in recoveries, since workers are generally more likely to choose to leave a job if there are job opportunities available elsewhere. As such, a higher quits rate is a sign of a stronger labor market. The chart below plots data from the Job Openings and Labor Turnover Survey (JOLTS) on both quits (voluntary separations) and layoffs and discharges (involuntary separations). The quits rate plummeted in the Great Recession as the layoffs and discharges rate rose sharply. Since then, as the labor market has recovered, the layoffs and discharges rate has fallen well below its pre-recession average, and the quits rate was near its pre-recession average as of June 2016 (the most recent data available). Nevertheless, the quits rate is still below its level in the early 2000s, part of a broader, decades-long trend of declining labor market fluidity whose causes and consequences continue to be debated by economists. 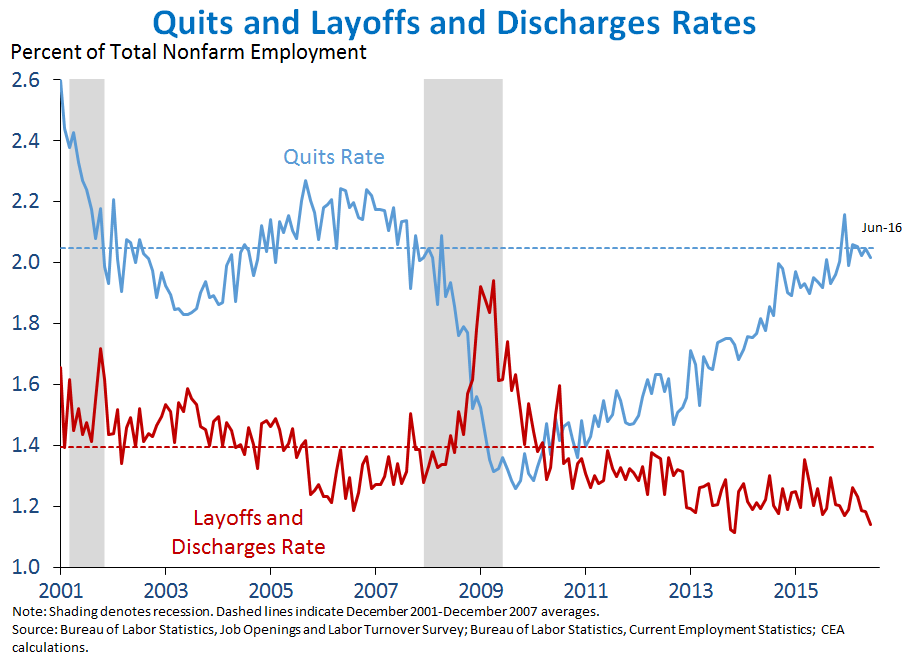 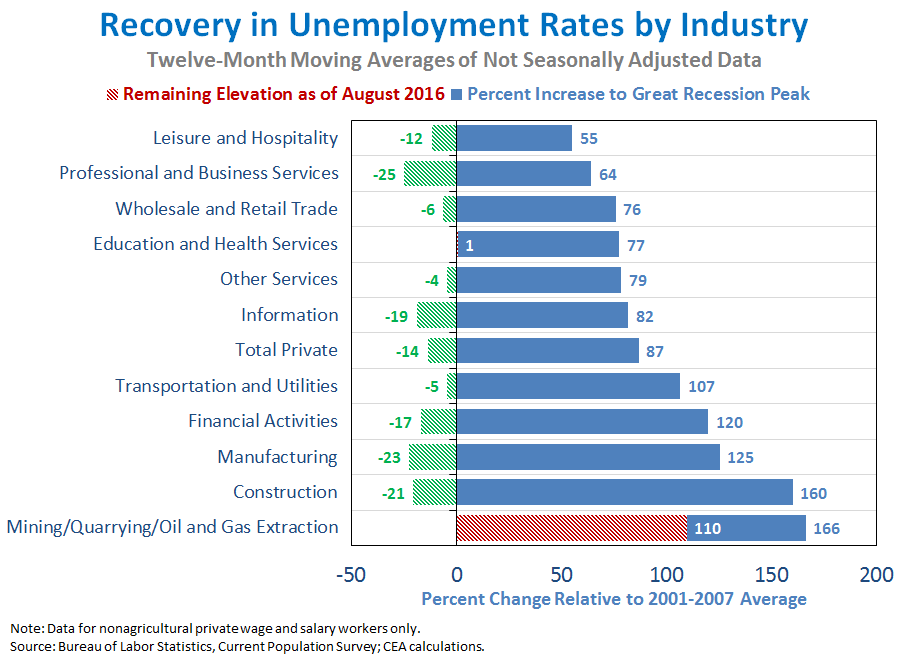 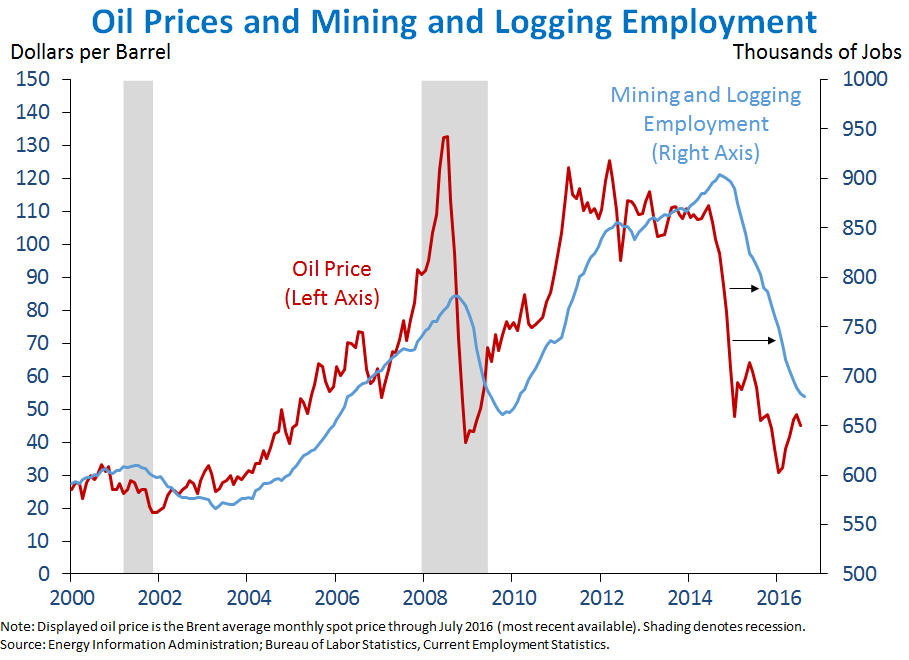 5. The distribution of job growth across industries in August was broadly consistent with the pattern over the past year, though some industries saw below-trend growth. Above-average gains relative to the past year were seen in transportation and warehousing (+15,000) and State and local government (+24,000), while mining and logging (which includes oil extraction) posted a smaller loss (-4,000) than in recent months. On the other hand, several industries, including professional and business services (+25,000, excluding temporary help services), health care and social assistance (+36,000), private educational services (+2,000), and utilities (-1,000) saw weaker-than-average growth. Slow global growth has weighed on the manufacturing sector, which is more export-oriented than other industries and which posted a loss of 14,000 jobs in August. Across the 17 industries shown below, the correlation between the most recent one-month percent change and the average percent change over the last twelve months was 0.82, in line with the average correlation over the last year. 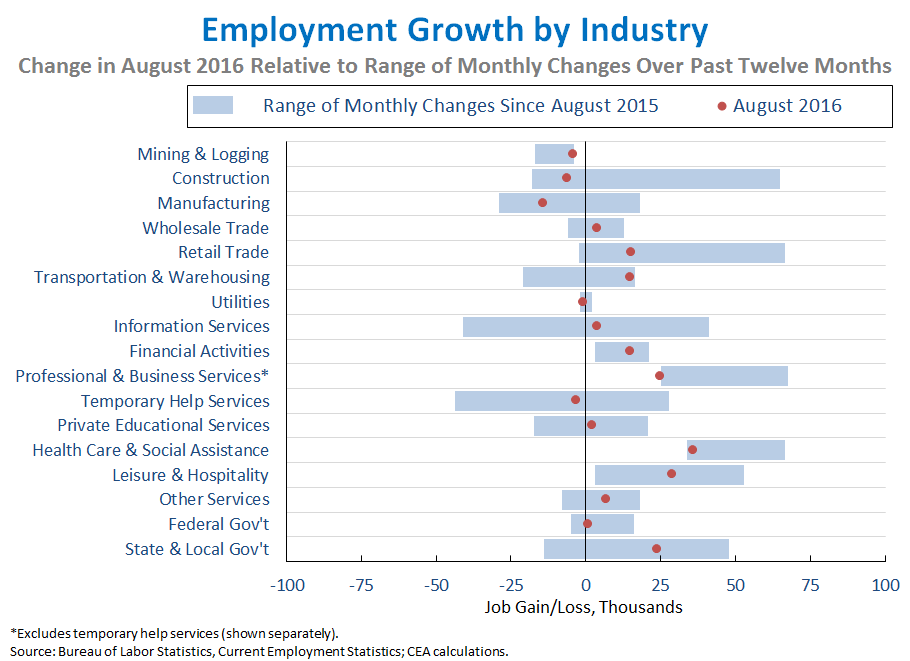