The economy added 156,000 jobs in September, as the unemployment rate ticked up amid rising labor force participation. U.S. businesses have now added 15.3 million jobs since early 2010, and the longest streak of total job growth on record continued in September. So far in 2016, hourly earnings for private-sector workers have increased at an annual rate of 2.8 percent, much faster than the pace of inflation. In fact, real wages have grown faster over the current business cycle than in any since the early 1970s. Sustained real wage growth in recent years, combined with continued strength in job creation, has led to increased incomes for middle-class families: last month, the Census Bureau reported that real median household income increased 5.2 percent from 2014 to 2015, the fastest annual growth on record. Still, more work remains to sustain faster wage growth and to ensure that the benefits of the recovery are broadly shared, including increasing investment in infrastructure and implementing the high-standards Trans-Pacific Partnership. Additionally, as discussed in a new White House report, Congress should follow the lead of 18 States and the District of Columbia to give millions of American workers a raise by increasing the Federal minimum wage.

FIVE KEY POINTS ON THE LABOR MARKET IN SEPTEMBER 2016

1. U.S. businesses have now added 15.3 million jobs since private-sector job growth turned positive in early 2010. Today, we learned that private employment rose by 167,000 jobs in September. Total nonfarm employment rose by 156,000 jobs, slightly below the monthly average for 2016 so far but substantially higher than the pace of about 80,000 jobs per month that CEA estimates is necessary to maintain a low and stable unemployment rate given the impact of demographic trends on labor force participation. The unemployment rate ticked up to 5.0 percent in September, while the labor force participation rate rose to 62.9 percent, the same rate as in the fourth quarter of 2013 despite downward pressure on participation from demographic trends. The share of the labor force working part-time for economic reasons (those working part-time but who would prefer full-time employment) ticked down in September to 3.7 percent, though it remains above its pre-recession average (3.0 percent). 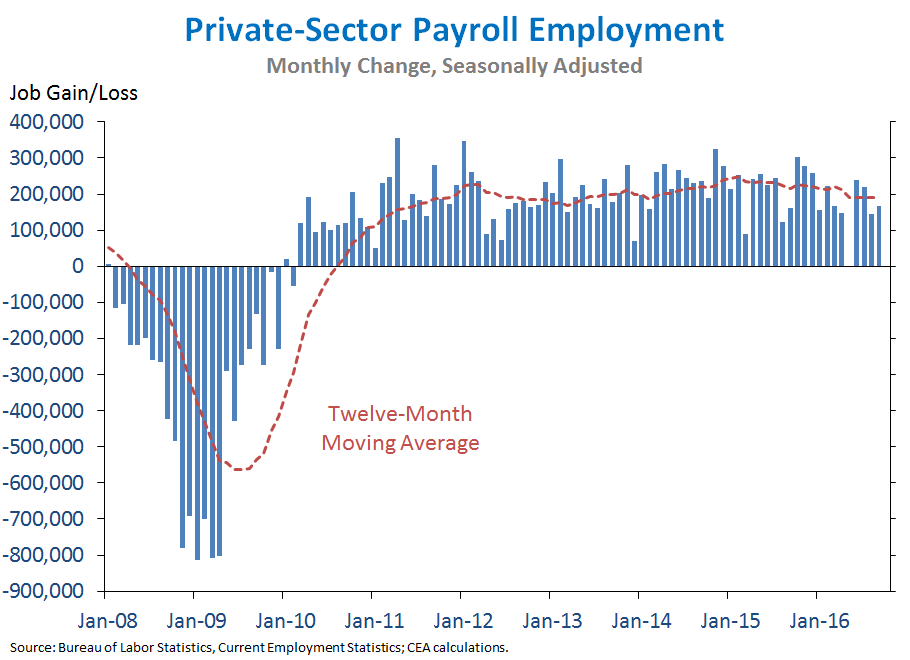 2. For more than three and a half years, American workers have seen sustained real wage gains, as hourly earnings have grown faster than inflation. So far in 2016, nominal earnings for private-sector workers have increased at an annual rate of 2.8 percent, well above the pace of inflation (1.4 percent as of August, the latest data available). As the chart below shows, nominal wage growth has trended up over the course of the recovery as the labor market continues to strengthen amid robust job growth. At the same time, consumer price inflation fell sharply in 2014 and 2015 due to steep declines in energy prices. While inflation has picked up slightly in recent months as energy price declines have moderated, nominal earnings growth has continued its pickup, translating into continued real wage gains for American workers—a key component of rising standards of living. 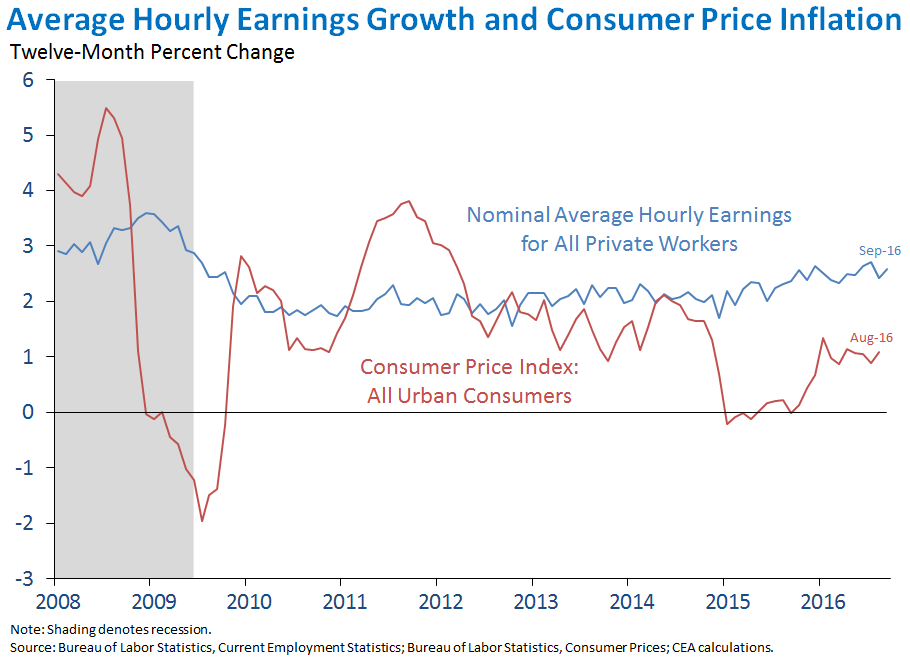 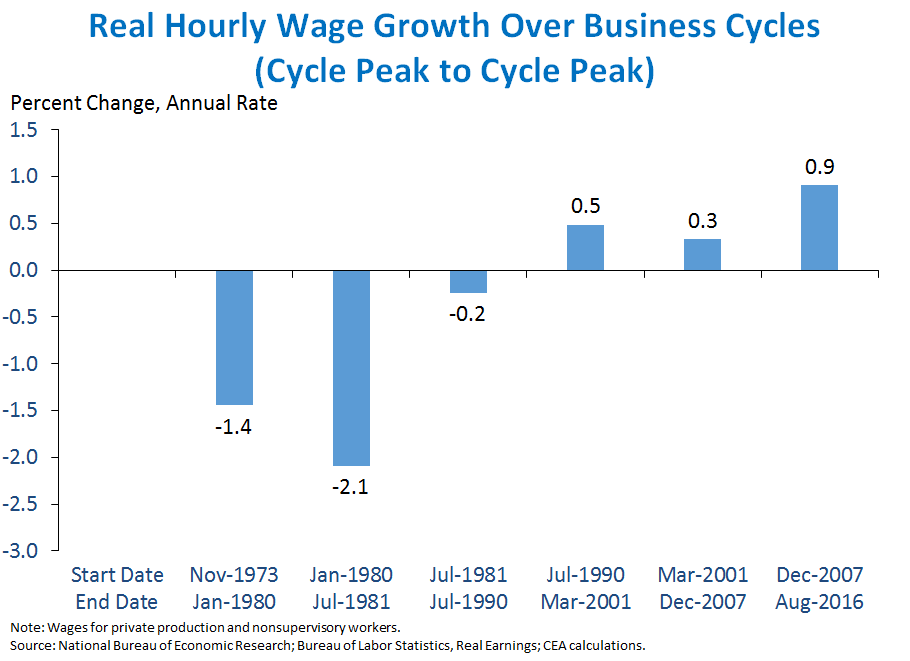 4. Rising real wages, combined with continued strong employment growth, have translated into increased incomes for American families, and data from 2016 so far point to continued gains. In September, the Census Bureau reported that real median household income increased by $2,800, or 5.2 percent, the largest annual increase on record. As shown in the chart below, median household income growth tends to track growth in aggregate weekly earnings, the total amount earned by private-sector workers. (Since both income and aggregate earnings reflect the influence of rising employment as well as rising wages, aggregate earnings are conceptually linked more closely to household income than to wages.) The historically large increase in median household income from 2014 to 2015 was far above what would have been predicted based on its historical relationship with aggregate earnings growth, but even aggregate earnings would have predicted strong gains in median income. In 2014 the situation was reversed, with the Census Bureau reporting income gains that fell short of what would have been predicted based on wage data from the Bureau of Labor Statistics. Growth in both real wages and employment so far in 2016 point to continued gains in real income for the typical American household when the data become available from the Census Bureau next year. 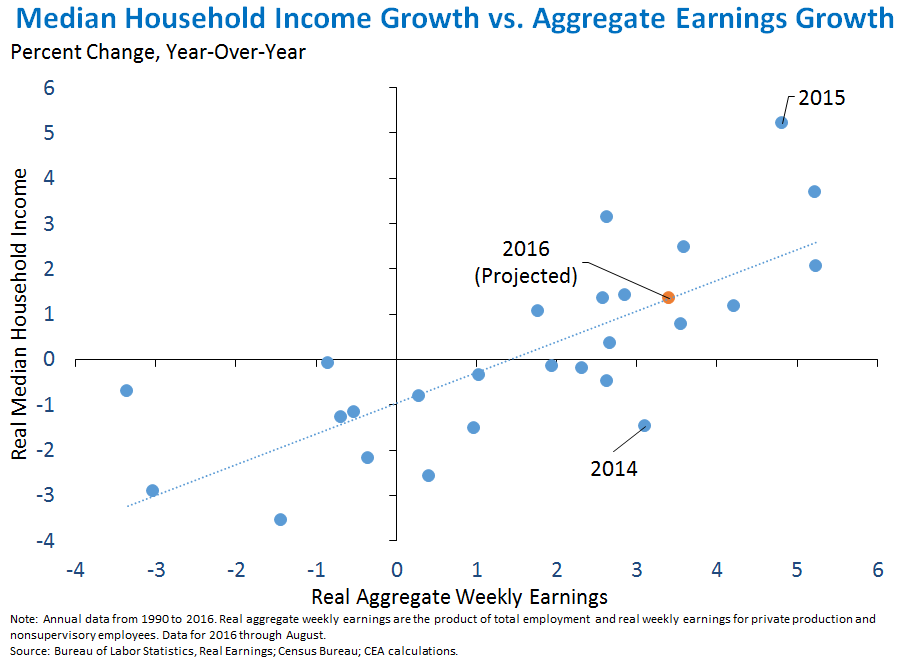 5. The distribution of job growth across industries in September diverged somewhat from the pattern over the past year. Above-average gains relative to the past year were seen in wholesale trade (+10,000) and other services (+15,000), while mining and logging (which includes oil extraction) showed no change in September after a number of months of job losses. On the other hand, several industries, including financial activities (+6,000), health care and social assistance (+22,000), State and local government (-15,000), and transportation and warehousing (-9,000) saw weaker-than-average growth. Slow global growth has continued to weigh on the manufacturing sector, which is more export-oriented than other industries and which posted a loss of 13,000 jobs in September. Across the 17 industries shown below, the correlation between the most recent one-month percent change and the average percent change over the last twelve months was 0.28, well below the average correlation over the last three years. 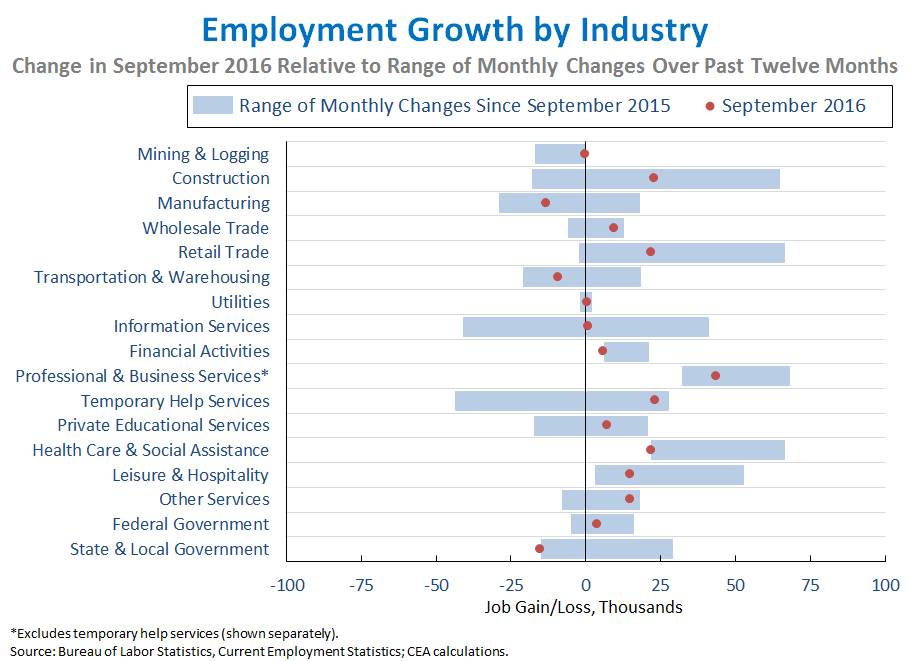