October 26, 2016 at 5:15 PM ET by Carrie Bettinger-Lopez
Twitter Facebook Email
Summary:
The White House hosted the first-ever meeting of a new initiative between the United States, Canada, and Mexico on violence against indigenous women and girls. 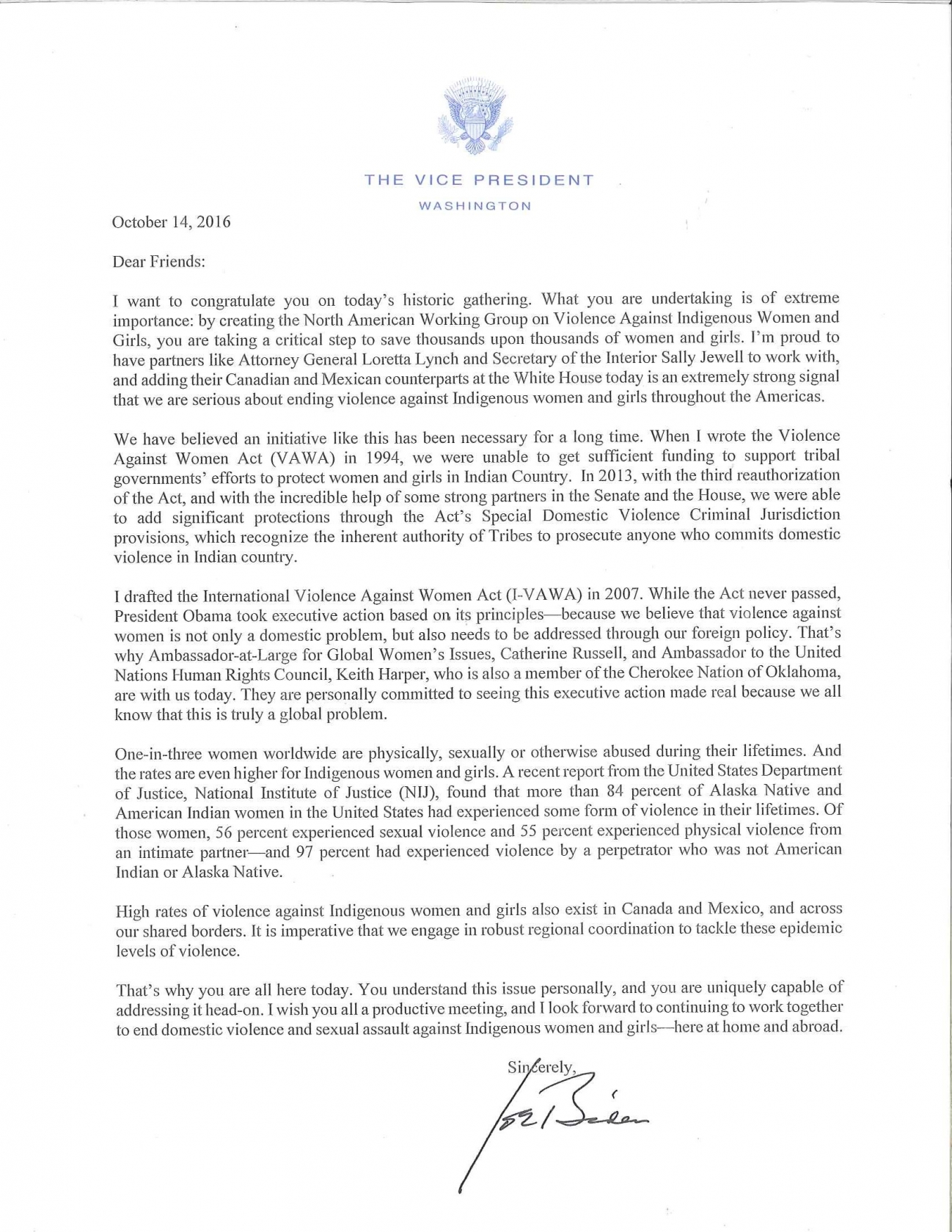 I want to congratulate you on today’s historic gathering. What you are undertaking is of extreme importance: by creating the North American Working Group on Violence Against Indigenous Women and Girls, you are taking a critical step to save thousands upon thousands of women and girls. I’m proud to have partners like Attorney General Loretta Lynch and Secretary of the Interior Sally Jewell to work with, and adding their Canadian and Mexican counterparts at the White House today is an extremely strong signal that we are serious about ending violence against Indigenous women and girls throughout the Americas.

We have believed an initiative like this has been necessary for a long time. When I wrote the Violence Against Women Act (VAWA) in 1994, we were unable to get sufficient funding to support tribal governments’ efforts to protect women and girls in Indian Country. In 2013, with the third reauthorization of the Act, and with the incredible help of some strong partners in the Senate and the House, we were able to add significant protections through the Act’s Special Domestic Violence Criminal Jurisdiction provisions, which recognize the inherent authority of Tribes to prosecute anyone who commits domestic violence in Indian Country.

I drafted the International Violence Against Women Act (I-VAWA) in 2007. While the Act never passed, President Obama took executive action based on its principles—because we believe that violence against women is not only a domestic problem, but also needs to be addressed through our foreign policy. That’s why Ambassador-at-Large for Global Women’s Issues, Catherine Russell, and Ambassador to the United Nations Human Rights Council, Keith Harper, who is also a member of the Cherokee Nation of Oklahoma, are with us today. They are personally committed to seeing this executive action made real because we all know that this is truly a global problem.

One-in-three women worldwide are physically, sexually or otherwise abused during their lifetimes. And the rates are even higher for Indigenous women and girls. A recent report from the United States Department of Justice, National Institute of Justice (NIJ), found that more than 84 percent of Alaska Native and American Indian women in the United States had experienced some form of violence in their lifetimes. Of those women, 56 percent experienced sexual violence and 55 percent experienced physical violence from an intimate partner—and 97 percent had experienced violence by a perpetrator who was not American Indian or Alaska Native.

High rates of violence against Indigenous women and girls also exist in Canada and Mexico, and across our shared borders. It is imperative that we engage in robust regional coordination to tackle these epidemic levels of violence.

That’s why you are all here today. You understand this issue personally, and you are uniquely capable of addressing it head-on. I wish you all a productive meeting, and I look forward to continuing to work together to end domestic violence and sexual assault against Indigenous women and girls—here at home and abroad.

Last Friday, I shared this letter from Vice President Biden with participants at the historic first meeting of the North American Working Group on Violence against Indigenous Women and Girls.

Established on June 29, 2016, under the pillar of defense and security commitments made at the North American Leaders’ Summit (NALS), the Working Group and its formation underscored the point I made in a previous blog on this topic: that women’s security is integral to national and regional security.

Earlier this year, the National Institute of Justice at the Department of Justice published a report that confirmed through numbers what many Tribal advocates know all-too-well from experience:

84 percent of Alaska Native and American Indian women and girls have experienced some form of violence in their lifetimes. Of those women:

That disturbing reality is what spurred advocates to insist, years ago, on the inclusion of what ultimately became the Special Domestic Violence Criminal Jurisdiction provisions in the 2013 Violence Against Women Act (VAWA). These provisions reaffirm the inherent authority of Tribes to prosecute anyone who commits domestic violence in Indian country.

High rates of violence against Indigenous women and girls also exist in Canada and Mexico, and across our shared borders. To address this continent-wide scourge, the Working Group was born.

The meeting began with an opening plenary where I read the above letter from the Vice President. That was followed by remarks from:

At lunch, Tina Tchen, Assistant to the President and Executive Director of the White House Council on Women and Girls, initiated a discussion on the role of Indigenous leaders and advocates in subsequent meetings of the Working Group which was led by:

All three countries resolved to support the full participation of Indigenous representatives at the next high-level meeting, which will be hosted by the government of Canada in 2017.

Our day of technical discussions culminated with an historic closing plenary session led by U.S. Attorney General Loretta Lynch and Secretary of the Interior Sally Jewell. They were joined by:

As Valerie Jarrett emphasized, this was significant: when women come to the table as leaders, the issues of women and girls are given the level of attention they deserve.

We announced several exciting new initiatives at our meeting, including:

Find out more about these and other commitments, and watch the meeting yourself.

It was a true honor to host the first meeting of the Working Group, which builds on the foundation of policies the Administration has championed to recognize Tribal sovereignty, strengthen our justice and health systems’ responses to violence against Alaska Native and American Indian women and girls, and advance the human rights of Indigenous peoples globally.

We look forward to another productive meeting in Canada next year that will further solidify the commitment of the governments of North America to take bold steps to improve the lives of Indigenous women and girls across our continent.

For the complete list of new trilateral commitments made between the governments of the United States, Mexico and Canada, view the Fact Sheet: Key Deliverables for the Inaugural Meeting of the North American Working Group on Violence against Indigenous Women and Girls.

Cailin Crockett helped to collaborate on this blog. She is a Policy Advisor in the Office of the Vice President, on detail from the Department of Health and Human Services.